Return of the King 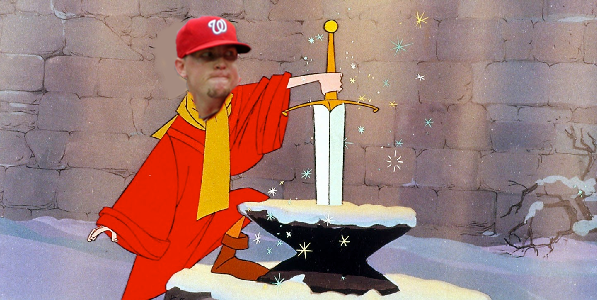 This seems like as good a time as any to talk about the Nats bullpen a bit. I mean, has anything been going on with it lately?

King of the Brit… er Bullpen

It’s great to see Drew Storen back in the role for which the Nationals drafted him. This was not totally unforeseeable – after he went down to the minors last year and fixed his delivery, I suggested he should have the job going in to the 2014 season. He’s been great this season, the 1.31 ERA is nice, but, as FP pointed out in the game, he has changed his repertoire as well. Check out his pitch type chart from Brooks Baseball:

The marked increased in the changeup is a big development, and it’s offset by the decrease in the “sinker” which is how Brooks Baseball usually interprets a 2-seamer (whether it’s a genuine sinker or not). Confidence in the change essentially turns him from a two pitch pitcher to a three pitch pitcher (if you really want to distinguish the two fastballs, then he goes from a three pitch to four pitch pitcher). This makes him much tougher to guess against, and so far it’s also made him much tougher to hit.

I have referred to Storen as The Once and Future Closer several times. If you don’t know what this refers to, it is the title of a well known modern King Arthur retelling. That book itself takes it’s name from Malory’s Le Morte d’Arthur, the prototype of the classical version of the tale. So you may see #TheOnceandFutureCloser hashtag coming from my twitter account, accompanied by some stately pictures of Sir Drew as King Arthur himself.

The Use of Lefties

I don’t understand how Matt Williams is using the lefties in him pen. Let’s take Ross Detwiler out of the question, because if Williams doesn’t know just how to use him, well, neither do I. But, as I mentioned when they acquired him, Matt Thornton‘s presence does not negate the usefulness of Jerry Blevins.

The two guys have quite different skill sets. Thornton is a very good reliever, and he does pitch better against lefties. But not that much better. Over his career, lefties have a .641 OPS against him, while righties are at .683. This year the split is a bit bigger, but not drastically so – .563 vs .632.

Blevins, on the other hand, has sucked against righties this year. But he is incredible effective against lefties – they’re hitting .158/.206/.221. That’s a .427 OPS! Meanwhile righties have an .855 OPS against him. The splits for his career aren’t normally this pronounced, but lefties are still a meager .599 OPS against him, while righties are way up at .733.

Blevins is the perfect LOOGY. And Williams had a great chance to use him just for that, and instead he used Thornton for one hitter. It’s easy to second guess after the hit, but I didn’t second guess. Here’s what I said in that article I linked

I’d rather have Blevins than literally any other Nats pitcher to face Freddie Freeman, Adrian Gonzalez or Matt Adams.

And it’s not just yesterday. In his last six outings, Thornton has faced less than three batters five times. In none of those outings has he pitched a full inning. In Blevins last six outings, he has faced less then 3 batters, and pitched less than one full inning just one time. It’s as if Blevins is the effective lefty and Thornton is the LOOGY. But it’s just the opposite, and it’s not playing to either player’s strength. I’m just saying, especially with Blevins – it’s what they does best, let him do it.

The Demise of Soriano

As mentioned earlier, I’ve gone over this a few times before on the site, but while Rafael Soriano‘s problem recently has been leaving the ball over the plate, he’s got a bigger issue. His fastball velocity has steadily declined over the last few years. While his numbers haven’t been terrible, his strikeout rate saw a huge dip last season. This year the rate did bounce back…

…so he hasn’t been awful in that regard. However, the dip in the velocity is indicative of a loss of stuff. He can’t get away with what he used to be able to get away with. So early in the season, when the ball was doing what he wanted, he was still talented enough to get away with it. But once he wasn’t able to locate, he stuff was no longer good enough, and he got hit hard.

This is important, because if it is what’s going on, it also means he’s probably got something left to give this team. While he may not close another game for them, if he gets that location back, he can still be very effective. So let’s hope he does that, and ends up having some very good 7th innings for them.