Soriano’s Missing Heat Puts Him in the Wrong Role

It’s pretty apparent that Rafael Soriano isn’t having his best season. His ERA sits at 3.71, and while he ranks third in the NL in saves with 32, he’s also tied for second place in blown saves with 6. 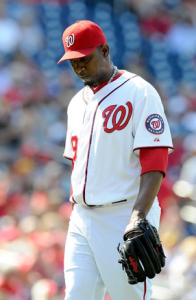 Soriano has also given up 7 home runs, which ranks him tied for second among the top 20 save-owners. His FRA is 4.32, and his WAR is pretty bad. BP has his WARP as the lowest among the top 16 saves leaders, fangraphs has him tied with Jim Johnson for worst WAR among that same sized group. ESPN has him slightly better, behind 2 players in that group.

But enough about him stinking, the real question is “Why is he stinking?” Maybe it’s nothing. After all, he’s a reliever, and most of those guys not named Mariano tend to have fluctuating numbers year to year. The problem is, he’s never had a year with more than 40 innings, as a reliever, with an ERA over 3.00.

In fact, it seems that his velocity has dropped over the last few years. Unsurprisingly, his K rate has dropped right with it. What’s surprising might be how well the drops line up. 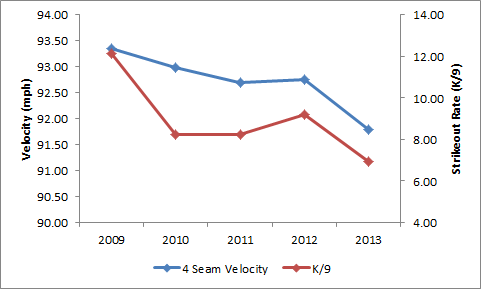 It seems that Soriano isn’t striking people out because he no longer has the fastball that he used to have. It’s not a particularly unique story, but it is probably irreversible.

The drop in velocity, happening steadily over several years, at age 33, probably isn’t going to get fixed. And so, neither will his poor performance. He’s good enough to pitch at this level, but unless something changes, he’s  just not be closer material anymore.

If that’s the case, the Nats have to figure out what to do. They have him under contract for one more year, but it might make sense to move him down in the late-inning rotation. Tyler Clippard is definitely an obvious candidate, he’s having a great season, has the K rate to close, and certainly deserves a shot.

The success probably has to do with an adjustment to his delivery, he no longer has a straight-knee leg kick and instead lifts his leg with basically a full knee bend. Regardless, Storen has always had great stuff. That didn’t just go away for good this year, and it’s good to see him pitching so well. This is what Baseball Prospectus said about him last spring:

Mid-90s fastball, slider that incapacitates right-handed hitters like a blowdart that’s been frogrubbed, and location that allows his manager to exhale. Storen’s a championship-caliber closer, and the incremental gain of using him in slightly higher leverage situations is dwarfed by the club harmony you get by having him in a defined role. He’s a badass, and there’s no reason to expect that to change.

Change it certainly did this year, but if he’s found his stuff again, it’s hard to deny how good he could be. The defined role is important for club harmony, and so they probably have to pick one. I think Storen has the higher ceiling, but the Nats will need to reassess at the end of the year to see if he’s actually performing at that level.

Either way, they shouldn’t go in to next season with Soriano penciled in to the 9th inning role. Unless his fastball velocity magically reappears, he isn’t a closer any more, and the Nats need to understand that, and act accordingly.