Yesterday, during his chat, I asked Baseball Prospectus prospect expert CJ Wittman a question about the Nats farm system. Don’t get all worked up about the question – I know there are some other guys in the system that are interesting (Matt Skole, Jefry Rodriguez, Drew Ward, Taylor Hill… the list goes on). I just wanted to get some perspective from someone who scouts across all 30 MLB teams. Anyway here’s what he said.

Interestingly, after 6 years in Bethesda, I’m now Charlie from Rockville. Actually it’s more White Flint area. I’m sure some of my neighbors would call it “North Bethesda”, but as a former Bethesda resident, I just can’t abide… wait a second, that’s not what is interesting. It’s the Reynaldo Lopez mention.

Where Lopez was not mentioned, however, was the BP Top 10 Nats Prospect list, or any other prospect list I could find. In part, it’s probably because he had all of 5 1/3 IP in US pro baseball before this year. Another 10 2/3 innings in the Dominican Summer League round out his pre-2014 Baseball Ref resume. 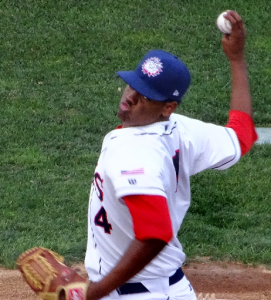 But 2014 has been a revelation. The 20 year old started out in A ball, at Hagerstown, but was shelled in his first two starts. So the Nats moved him down to the NY Penn League, the short season, lowest of low A ball. Since that move, he’s been great. In 7 starts with Auburn he had a 0.75 ERA, and was named Pitcher of the Week in late June.

A few more good starts with the Doubledays and they moved him back up to Hagerstown. In his first start back, he went 6 IP, struck out 9, walked 2, gave up 2 H and 0 ER. He’s started a total of 5 games for Hagerstown since those first two early in the season, and has yet to give up an earned run. Last night he pitched again, and went 6 IP, 4 K, 1 BB, 2 H, o ER. His ERA for the Suns this season is now 1.47.

He’s walking a few too many and not striking out quite enough to think some of that isn’t luck dependent (well, ok, any time someone goes that many starts without giving up a single ER he probably has some luck on his side). But the numbers are really good, either way.

I hadn’t heard about him before CJ Wittman mentioned him, and chances are not many of you have either. But Lopez being under the radar may soon change. He’s starting to get noticed a bit more

Tucker Blair is another Baseball Prospectus prospect guy, and he went to Hagerstown specifically to see Lopez. Blair filed a scouting report on him today, here are some of the highlights (but it’s free, so go to the link!) with quotes:

Pretty impressive stuff there. Seems to me that the reviews of the fastball are so glowing, if he figures it all out he’s got real solid starter potential, and if he doesn’t, that one pitch is so good he’s probably still a good reliever. But that’s a long ways away. Also, writeup of the game from last night:

With now 37 1/3 straight scoreless, I’m certainly interested in seeing how he does on his next outing. He’s only 20, and he’s a bit away from the majors, but he’s very much emerged on the scene as an intriguing prospect. I doubt those prospect lists will ignore him next year.