Nats Get Another Lefty Reliever 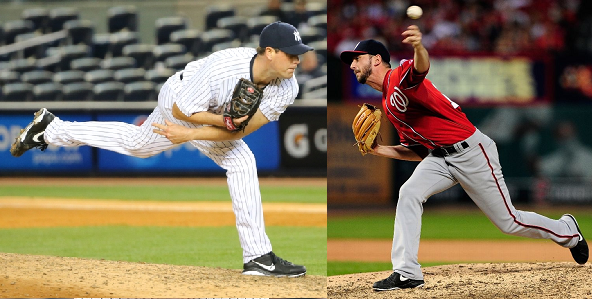 According to the twitter machine, the Nats just picked up a lefty reliever

Can confirm report by @JonHeymanCBS: #Nationals have acquired LH reliever Matt Thornton on waivers from #Yankees.

So who is he, and what does he do? Matt Thornton, being of sound mind and body, is defined by both is job and his handedness, hence the title of “lefty reliever.” He is, in fact, both of these. So is Jerry Blevins. Does one need two? If not, is one better.

Alright, enough of that, let’s take a look at Thornton 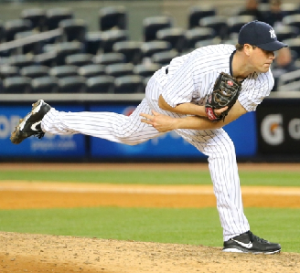 And On to Blevins

So What’s the Difference

These stats shine a pretty good light on what the difference between these two guys really is. Assuming 2013 was more of an aberration, Thornton is essentially a solid middle reliever moving towards the end of his career that probably should be used as such. He is good against lefties and pretty effective against righties. He still has strikeout stuff against LHH, and the RHH aren’t killing him, so using him in an inning that features both shouldn’t be considered a bad idea. However, putting him in solely to pitch to a couple of righties is probably not a go to move. But keep this in mind – whatever decision they make, they picked up an effective reliever, figuring out what to do with the roster is a secondary decision.

Blevins, on the other hand, looks like a prototypical LOOGY right now. Over his career he has shown enough vs RHH that you wouldn’t think he would be lost against them, and that may come back. But this year he is awful against them, and he simply shouldn’t be used vs RHH in a high leverage situation. If Matt Williams wants to work out the kinks against some righties when the Nats are up by 10, ok, but in a close game, it’s pretty unwise. That being said, he has always been, and continues to be, better than Thornton against lefties.

You might think the Nats picked up Thornton because their bullpen isn’t pitching great. Except it has the 6th best ERA in baseball. It has had a very bad July, though, with the 6th worst ERA in MLB. So call it a bad month, or call it something that needs to be fixed.

If there’s only room for one lefty in the pen, the easy decision oh who should be with the team and who shouldn’t in not necessarily an easy one. It would be a shame to lose Blevins because he has been woefully misused to this point. The way he has pitched, 90 PAs against RHH to 81 PAs against LHH seems like criminal mishandling. I’d rather have Blevins than literally any other Nats pitcher to face Freddie Freeman, Adrian Gonzalez or Matt Adams.

But I’m not Matt Williams, and neither is Mike Rizzo. The two of us get the opportunity to signal for a reliever the same amount of times during the season – zero. If Rizzo doesn’t trust Williams to use Blevins properly, then he might have to substitute him for a LHP who is less effective vs lefty hitters but more effective overall. If Blevins falls off the roster after this move, it might give us a hint into Rizzo’s mindset. Of course, it might show that Rizzo favors a more universally effective LHP than a LOOGY. But if Blevins and Thornton both stay, and Williams uses them both properly, that is probably the best thing for the team.