DC and the World Series 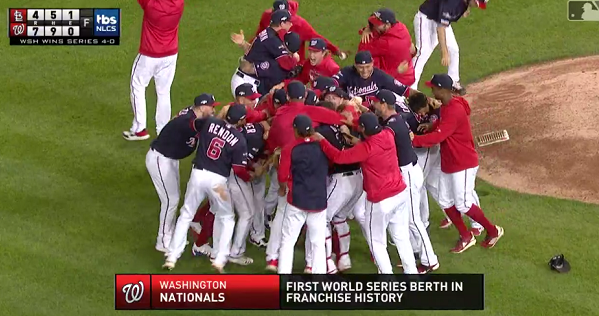 The Nationals are going to the World Series! I’m not going to do a write up of the game, I’ve never done that here, and writing like my third post this season as a game or series review seems crazy. But I did want to put something out there, because I’m just so happy for this team, and I want to, as Charlie Slowes says, remember where I am so I can remember where I was.

Before I get into that, though, I do want to point to an article I wrote 11 years ago. In November of 2008, the Nats had just finished a 102 loss season and Strasburg was not yet drafted. Things looked bleaked. So I took a look back at the time the Washington baseball team, sometimes referred to as the Nats, last won it all, 1924. It was a 7 game series, and game 7 was an extra inning affair, with Washington legend Walter Johnson playing a key role in the victory. Check it out!

Again, I’m not going to review the series or the last game, but I will note that I am still a bit shocked at how much the Nats completely dismantled the Cardinals. The starting pitching, that thing that was supposed to make the Nats title contenders, came up big, and it was a joy to watch Max Scherzer, Stephen Strasburg, Anibal Sanchez, and Patrick Corbin mow down hitters and dominate (until the 5th inning of Game 4, at least). I was able to watch the two games in St Louis from the comfort of my couch, happy to see them win a game away, thrilled about them taking two.

I was stuck out in LA for work for games 3 and 4. I made it back to my hotel after the Nats scored 4 in the third inning, listening to Charlie and Dave do the radio broadcast, only find my hotel room TV had TBS, but it wasn’t working. So I laid in bed and listened to the whole thing. It was a joy.

For game 4, I wasn’t going to miss watching, especially since they could clinch, so I found a bar, and watched. It was great to see, and while I was watching by myself in a bar in LA with most people there only moderately interested in the outcome of the game, between texting with friends and Twitter, I was never alone, I was among Nats fans.

Now, we get a World Series in Washington, DC for the first time since the Senators lost in 1933. 86 years is a long time. It’s been 95 years since Washington has won it, as mentioned above. And while we are all excited for the possibility of another title, don’t take this moment for granted.

The Nats have won a National League pennant. This is a big deal. In this sport, more than any other, because of the history of it all, a league championship has meaning. Be happy about this, enjoy it.

Congrats to Davey Martinez, the only Nationals manager to win a playoff series. He’s got 2 of those under his belt, plus the Wild Card game to make wins in 3 clinching games. I’m sorry I ever doubted you, Davey.

And if you are lucky enough to be going to a World Series game in Washington, DC (it is very satisfying to be able to type that out), then you should know it will be one of the most crowded, lively games you’ve ever attended. So you should probably know a quick and easy way to find beer. Oh, wait, I’ve got a solution for you!