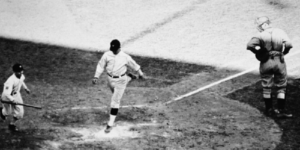 Now, much like the summer, is a depressing time for Nationals fans – baseball is over, the playoffs have ended, not only did the team not sniff the postseason, the outlook for playing in October 2009 looks bleak. But do not despair, Washington baseball fans! Rather, think back to the glory days of the franchise, when they were able to bring the last championship parade down Pennsylvania Avenue.

It was 1924, and a new prosperity had overtaken America. The post-war economic boom was in full swing, as was prohibition. Gil Hodges was born and Frank Chance died… OK enough of that, you can look up 1924 in wikipedia, on to the World Series.

The ’24 series was a matchup between perennial NL champs, the New York Giants and perennial losers, the Washington Senators. At that time, the Senators were sometimes called the Nationals, but they were rarely called good. With two winning records in eight of the previous seasons, they continued to disappoint. They started out the 1924 season as poorly as ever, and were in 6th place (out of 8 teams) in the AL as late as June 16, after 1/3 of the year. They then proceeded to win 10 games in a row, to leapfrog everyone into 1st place. After winning 17 out of 19, they had a poor July and August, and were in 3rd place as late as August 17. But 3rd place was only 3 games behind with about 40 games to go, so they were still in the thick of it. From August 17 on, it was all Washington. On August 28 they started a 4 game series with the first place Yankees, took 3 out of four, took first place and never looked back. They rattled off 30 wins to finish 30-10 in that stretch, and won the pennant by 2 games.

Copy and paste this URL into your WordPress site to embed

Copy and paste this code into your site to embed