The 2019 Washington Nationals are World Champions 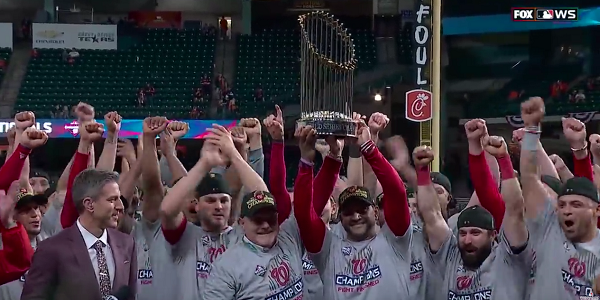 Some of this fanbase can truly define “long-suffering”, being DC sports fans who have waited 95 years since the last World Series victory. But I’m not that old, and my perspective is that of a Nats fan, a fan since they arrived in 2005.

If you are like me, you lived through so much disappointment in this team before reaching the top of the mountain. To name just a few that stick out in my mind:

There were certainly good times, too. This team, this franchise, has averaged just over 91 wins since the beginning of 2012. We go to see Ryan Zimmerman when he was 25, Stephen Strasburg when he debuted, Alfonso Soriano in 2006, Mike Morse in 2011, and four division titles. But while the ride had its ups and downs, nothing compares to this season.

This team did not just get hot at the right time this year, unless you count a 5 month stretch as a hot streak. They had the best record in baseball since late May. This playoff run was magical, with plenty of come-from-behind backs-against-the-wall moments. But don’t let the magic take away from the fact that it was also great.

This team had an MVP candidate in Anthony Rendon and 2 legit Cy Young contenders in Scherzer and Strasburg. Patrick Corbin, their big offseason acquisition and their third starter, was 13th in all of MLB in fWAR. Juan Soto had one of the best season of anyone under 21 in MLB history. Their veterans played well – guys like Adam Eaton, Kurt Suzuki, Brian Dozier, and Howie Kendrick took turns providing lifts when they needed.

And they had chemistry. People often ask if chemistry begets winning or if winning begets chemistry. With the Nats, this season, it was the former. They signed Gerardo Parra on May 10, and while it took a few weeks for the chemicals to mix properly, they gelled as a team from there. Everyone knows the Baby Shark story, and how much this fanbase embraced a silly, somewhat accidental rally cry (the best kind). Last night in a postgame interview on MLB Network, Scherzer said it was Parra, along with Anibal Sanchez, who made this clubhouse work. They brought everyone together, got them to have fun together, and got them to dance in the dugout. It had all the talent, they helped get everyone going.

It’s hard not to smile for three players in particular. First, for Max Scherzer, who has been the best pitcher in baseball for the last few seasons, and even if he can’t claim that title anymore (although he’s not far off), at age 34 finally got his first World Championship. Second, for Stephen Strasburg. I went to his debut, and that’s when it started feeling like this team, this franchise, had a shot. He endured all the talk about his fragility, his shut down, his sensitivity to weather or sweat or whatever, and he came out stronger. He was the ace this postseason, and he was incredible, winning the World Series MVP. Third, for Ryan Zimmerman. He, more than anyone, embodies the Nationals. He’s been there since we have! Since the beginning! Whether or not he comes back, it’s so fun to see him win one, and win one here.

It’s wonderful to see Mike Rizzo get his championship as well. Rizzo built this team, he built it out of metal and brawn. He built a team, over the last decade plus, that could have won it any of the previous 7 years, they were good enough, had enough talent. But they never did it. This year, when it seems criticism of him was worse than ever, when his job was on the line perhaps more than ever before, the team came through for him.

And finally, Davey Martinez deserves all the credit in the world. Many of us, myself loudly included, thought he should be fired when the were 19-31. He looked lost for pretty much all of last season – upbeat when it seemed odd to be so, seemingly unable to handle a bullpen. April and May didn’t look much different. But boy were we wrong.

Davey’s even keel attitude was just what they needed. Maybe he saw they were struggling and changed how he interacted with them – no more artificial team-bonding things, let them figure it out themselves. Whatever it was, he stayed patient, told them they had the horses to do it, they just needed to get healthy and get hot.

They were good, and they were patient. They kept fighting, because they knew they could come back every time. They had already done it for the season, and so they kept doing it in the postseason. The Nationals are World Champions.