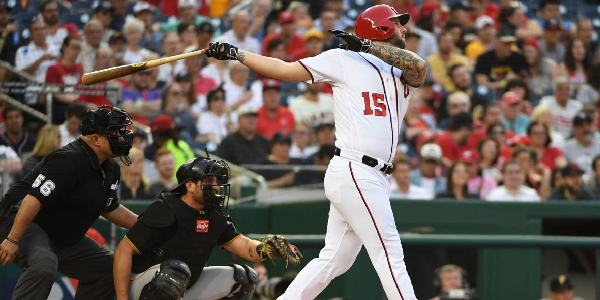 When the Nationals signed Matt Adams this offseason, there was some consternation. Sure, he’d be a solid backup for when Ryan Zimmerman wasn’t able to play, or wasn’t playing well. But Adams seemed like a downgrade from last year’s Zim backup Adam Lind (they did offer Lind a contract), and would only save the team a few million dollars, maybe.

Then Lind didn’t even get signed (he’s currently on an MiLB contract with the Yankees), and Adams didn’t even save them money. Adams had a great 2nd half with Atlanta last season, but he hasn’t been the Matt Adams who first emerged on the scene in St. Louis in years. This was starting to look like the wrong decision for the Nats. Not a debilitating one, but not the right one.

Then everyone got hurt, the offense was struggling, and Adams had to play. With three of their top five hitters out, in a major offensive slump, the Nats, despite having a healthy Zim, were forced to use Adams, in left field. For a few games in late April he was put out there, despite his poor defensive reputation, and then, since starting April 30th against the Pirates, Adams has been in the starting lineup every night. And he has flourished.

Kevin Long has to get some credit for this. I wrote, when the Nats hired Long, that he had a good track record of getting hitters to have increases in HR production. And that track record is especially true with left handed hitters. Lefties who aren’t considered power hitters become ones, and lefties who are get better. I was thinking about Bryce Harper and Daniel Murphy when I wrote that, Adams wasn’t yet on the radar. But it’s hard to not think Long has something to do with this power surge. His work with Adams seems to have already born fruit.

I don’t think these lofty numbers will last all season, but he may very well be a very very good hitter against RHPs all year. What’s more impressive, is that he hit one of those HRs against a LHP, and probably will get some more opportunities against them. His career OPS vs righties is .845, it’s .602 vs lefties. All this makes him hard to sit, at least against RHPs, wherever on the field you have to play him.

May your worst troubles in life be an Adams in LF against a RHSP, rather than a Sierra at the bat against a SP https://t.co/jeymJaeXks

Adams in left field isn’t exactly the best solution, defensively, although he did make a stellar, homer-robbing catch the other night. And he’s gotten more time at first with Zim getting a few days to rest a minor injury. But his ability to play LF even a little is enough to keep his bat in the lineup.

Now, eventually the Nats will have to deal with the return of Adam Eaton and Murphy. And maybe, when that happens, they can take advantage of Adams’s time in LF this month. They can semi-platoon him with Zim one or two times a week against RHPs, because Zim should be getting rest, anyway.

Then two or three other days a week, they can put him out in LF, spelling Eaton or even Harper and Michael A Taylor, while Eaton moves to RF and CF those games. Of course, a healthy Nats team would also need to find ABs for Howie Kendrick, but this is a good problem to have.

Finally, I’d be remiss if I didn’t mention that Adams has a nickname, and it might not be the one you’re seeing. “Big City” is a nickname you may have seen for him, he got that early on in St. Louis. And although he weighed like 50 or 60 pounds less than he once did, it’s not a bad nickname. But he’s got a better one.

It was brought to my attention by actual well-respected news reporter Dara Lind that his original nickname in St. Louis was followed by another one – Big Mayo. Now, I don’t care if he isn’t as big as he used to be, he’s still over 230 pounds. And I don’t care if part of that weight loss regiment was giving up mayo. I don’t care because BIG MAYO IS AN INCREDIBLE NICKNAME.

I have seen documented evidence that this is indeed a real nickname. He probably hates that nickname, and I’m sure his teammates don’t call him that. But I love it, so until I’m actually informed that he does actually hate it, I’m going with it. He’s Big Mayo to me.

Matt Adams has been great this season so far. He’s gone from a viable backup to a valuable starter, and his presence is a big part of why the Nats have been playing great the last week plus. As more stories about this season come out, I think we’ll see that Kevin Long is a big part of the reason Big Mayo has been mashing even more taters.

Of course, mashing taters with mayo is not recommended – I’ve had it, and you’re better off with cream or milk and butter.