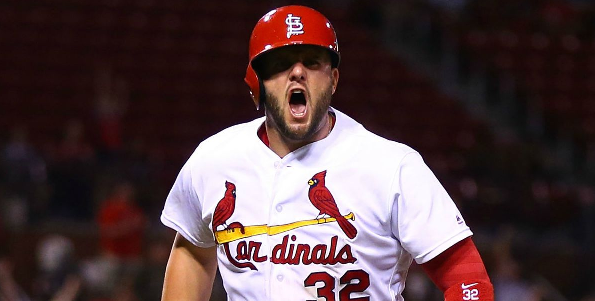 A little over 10 months ago, Nats fans were really worried about whether Derek Norris was going to hit enough to be a full time catcher, who was going to be the closer between Blake Treinen and Shawn Kelley (and if they’d sign another potential closer), and who was going to play first base once Ryan Zimmerman got hurt (or if he never hit again).

Forgetting about the first two issues, they got their Zimsurance in the form of Adam Lind, and two things happened. First, Lind turned out to be great. He hit .303/.362/.513 in 301 PAs and was an integral part of their success. The second was Zim stayed healthy, and was good. They didn’t Lind him to start 100 games for Zim. Those 301 PAs weren’t necessarily easy to find, and many of them came as a starter for an injured Jayson Werth.

The Nats have gone ahead and signed a new piece of Zimsurance, this time in the form of Matt Adams, long time Cardinal first baseman who was traded to the Braves last year. There was room to sign him, reportedly for $4 M with a $500 k option, because this winter, the Nats decided not to pick up the $5 M option on Lind. It’s not clear why they did declined on Lind, he wasn’t so expensive that he wasn’t easy to keep, as evidenced by their move today.

But decline they did, and they picked up a replacement pretty quickly. In terms of their needs, Adams fits the role very well. Like Lind, Adams is a lefty power hitter who rakes righties and can’t hit lefties. Adams and Lind actually have surprisingly close career numbers – their OPS vs LHPs is only .001 different. Against righties, Lind has hit a bit better than Adams. Some of this is due to where they were playing – Lind has a total career OPS+ of 112, compared to Adams at 111.

So, even for a part time player, Adams has always been pretty good. Adams had a very good 117 OPS+ last year. Lind’s was 123 – better for sure, but not something that seems way off from what Adams produced. Adams, over the last 2 seasons, had a .349 wOBA against RHPs. This puts him just outside the top quartile of players, around guys like Logan Morrison, Joe Mauer and Neil Walker. It’s not the dominance that Lind once showed, but it’s better than what one should expect from a backup.

To hammer that point a bit, David Cameron of fangraphs compared him to Hosmer

Matt Adams got 1/$4M to be a backup. Eric Hosmer is probably getting $100M+. So I’ll just share these career numbers and walk away. https://t.co/Na60BaIsKU

Here’s what he linked, which is for their careers:

Hosmer has been healthier, and can hit lefties, but still, it’s an interesting way to look at what the Nats got, for what they paid. Adams probably should be a full time player, like Lind once was, despite his struggles against LHPs. But, like Lind now, his struggles against them make GMs hesitant to spend money on him. So the Nats wound up with someone, like Lind, who should be able to fill in as a perfectly capable starting first baseman if need be.

With all these similarities, there are some differences. Lind came up as an outfielder, and has played about a third of his defensive innings there, the rest at 1B. Adams has played less than 4% of his innings in the field anywhere outside of 1B. Adams also strikes out more and walks less. While we’re talking negatives, Adams has a bit of an injury history. Most of them were relatively minor, but in 2015 he tore a quad muscle, limiting him to 186 PAs. On the positive side, Adams is a pretty decent defensive first baseman.

Adams will almost certainly be compared to Lind. He’s probably not going to be as good as Lind was last year, and he probably isn’t quite as good of a hitter as Lind is anyway. But he’s really close, and he’s younger. So while, at 29, the Nats probably don’t really expect Adams to improve much, they may have been worried that, at 34, Lind is going to decline.

It’s important to get a guy like this because, well, everyone needs a power bat off the bench. But also because, like I wrote before, it’s only been 10 months since we were wondering who would fill in for all those months when Zim was hurt (or just stunk). Zim was great last year, overall, and was healthy. But he is as risky as anyone on the team, and without a really competent backup, a move here was necessary.

Again, I don’t expect the .303/.362/.513 that Lind delivered last season, but they don’t need that from him. If he can stay healthy and hit righties, the Nats will be perfectly happy. And since the new Nats hitting coach Kevin Long has shown an ability to increase power in power-hitting lefties, hey, you never know! With that, I’ll leave you with this video from the 2014 NLDS Game 4, Adams vs Kershaw: