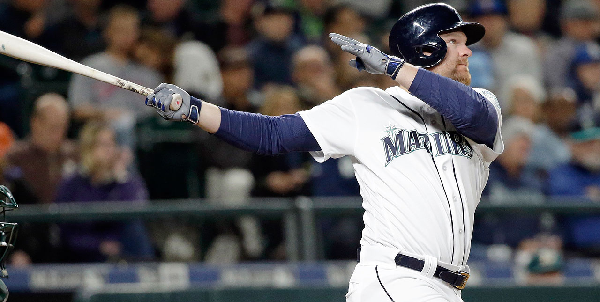 Today the Nationals signed first baseman Adam Lind to a major league contract. He’ll come in as the backup first baseman and, at least career-wise, the best bench hitter they have. 2016 aside, Lind is a flawed player, with limited but real usefulness. He’s a poor defender, even stuck at first base, he’s battled back injuries all of his career, and he has never been able to hit lefties.

But, he got older and wiser, learned to be more patient, and became one of the best hitters against righties in all of baseball. Until last season, when he was bad again. Well, he did this in Seattle, a bad hitters’ park in a bad hitters’ division, so, maybe he just needed to get away from Safeco Field?

It was away from Safeco where he had issues. He hit a measly .207/.258/.322 as a visitor, although some of that was probably bad luck, his BABIP of .239 was more than 40 points lower than his home number, and much lower than his typical career line.

This is probably one of the oddest lines I’ve seen. A nearly-300 point OPS split between home and away seems crazy, especially considering he did better in the place he wasn’t supposed to do better, at least by park effects.

So it wasn’t the tough hitting environment that did him in, although… maybe it was. I’m not trying to be so cryptic here. I’m just wondering if going from spending most of his home games in Toronto and Milwaukee – two parks that maybe favor the hitters slightly, but certainly aren’t pitchers’ parks, to the AL West with his home park and most of the opponents parks being full-on pitchers’ parks (LAA, HOU, OAK), screwed up his swing.

Usually a patient hitter with pretty good power, Lind turned into a free-swinger with a low walk rate and high K rate, with one of his highest HR rates. Was he just overswinging trying to muscle it out of a place that plays against power hitters? It’s certainly a crazy split, and that’s one explanation, but Eno Sarris wrote something last year for Fangraphs that may lend this theory some credence. He wrote that Lind was “pressing” on his new team. It could be a pressure thing, or it could be a ballpark thing, or it could be a random data thing… but it does appear to be a thing.

It’s hard to say he can’t hit anymore, considering what he did at home for the Mariners last year. But it’s hard to say he’ll be just fine, considering what he did when he wasn’t home. The chances of all of his bad luck happening outside of the Pacific Northwest, and all of his good luck happening there, making him, on balance an ACTUAL .239/.286/.431 hitter seems remote. So, I do have some confidence that he can bounce back.

Make no mistake, Lind is a platoon hitter at best. But even so, if he can hit righties as he did at Safeco last season and every ballpark the three seasons before that, he’ll be an extremely valuable player. He has a better track record than Clint Robinson, and much more power. If Robinson can’t repeat his 2015 numbers, and I doubt he can, his value is quite limited. If Lind can do even a little bit better than last year, he’ll provide patience, power, and a good bench bat. And if he can’t, he’ll still provide power.

Importantly, this provides some significant Ryan Zimmerman insurance. While I have watched people discussed replacing Zim for the last few seasons, I’ve never thought it was realistic, because of the money he’s owed. If we’re lucky, it won’t be an issue anyway, Zim will be healthy and will hit. If not, though, they need to do something.

The Nats have to somehow navigate not being able to actually replace Zim, while making sure they have someone who can take 300 or more of his PAs. That isn’t easy to do, and Adam Lind provides about as good of an option in that category as the Nats could hope for, barring a surprising development leap for Wilmer Difo, Matt Skole or another infielder. Stephen Drew is a nice player to have, and hit well last year, but his value is in his verstality and prowess as a defender. If Drew has 300+ PAs at 1B, the Nats are in trouble.

I like this deal, it fills their biggest potential/likely lineup hole with something that is better than their current options. Lind has his limitations, and he may not be the Lind of 2013-2015, but chances are he can still hit righties, and hit them for power. And chances are the Nats will need him to do just that.