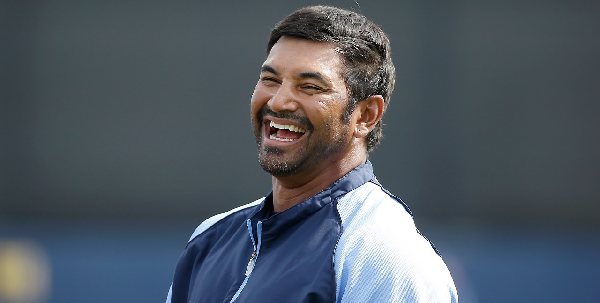 Dave Martinez, Davey if you’ve played for him, apparently, is the new manager of the Washington Nationals. He comes to DC from Tampa’s bench coaching position by way of Chicago’s with a World Series ring to boot. That is, in essence, why he was hired. A decade as a bench coach for the same manager, praise throughout baseball world, and no experience managing. Of course, that last point makes the 53-year-old more affordable.

That’s not to say he won’t be great – we just don’t know yet. But he is clearly loved by the players he has coached, and supported by his now former manager as someone who would make a good manager himself. The Nats gave Martinez a 3-year deal with an option for a fourth. While there is some irony that he got a longer deal than guys like Dusty Baker, it is logical that the Nats would do this to at least attempt to show some sign of stability.

Martinez was born in Brooklyn and moved to Florida when he was 13. His family is Puerto Rican, but he actually couldn’t speak Spanish when he first came up, and learned it as a young player in the Cubs organization (he’s bilingual now). A lefty outfielder with some speed, he played 16 seasons in the majors, sometimes as a platoon guy. He never had much power, but he could get on base, and at times was a .300 hitter. He moved around alot, playing for 9 different teams, including 3 1/2 seasons with the Expos, where he cemented his legacy as almost certainly the third best Martinez to ever play for Montreal. In 2000, he became one of only 8 players in 100 years to have played for four teams in one season.

Make no mistake, tough, he wasn’t just a bench player. He had six 2.0+ WAR seasons, and his best years were with the White Sox, from 1995-1997. In those three seasons, he hit .302/.373/.438 for a 113 OPS+ while playing average defense mostly in RF and CF, with some 1B duty as well. A versatile player that was never a star but could take a walk, steal a base, and move around the field on defense, it makes sense that he went into coaching.

Martinez started his coaching career with the Rays, as a spring training instructor, before getting the bench coach job under Joe Maddon in 2007. He’s been Maddon’s bench coach ever since, until today. He interviewed for a few managerial positions before this season. In 2010 he started interviewing, but was beat out for the Blue Jays and Indians job. He was beat out by Bo Porter in Houston, and Matt Williams here in DC, before interviewing with the Rays after 2015 when Maddon moved to Chicago.

He didn’t get that job, either, but he was endorsed by Evan Longoria, Alex Cobb, and Ben Zobrist as their choice. Sometimes these things should be taken with a grain of salt – they were intimately familiar with their long time bench coach and were certainly comfortable with him personally. But it also suggests they respected him and believed he would be good at the job. Besides the “culture in place” aspect of it, the players mentioned he could relate to them.

It’s hard to know someone’s personality until you really interact with him – so most of us won’t ever really know what he’s like. But in Tampa, he was known as an affable, friendly, happy guy. This seems much closer to Dusty than to Matt Williams, even if the rest of his resume is vice versa. The Orlando Sentinel opened a profile of him with “A slight smile never leaves Dave Martinez’s face” – Matt Williams usually sported a quizzical scowl. He is “free spirited but stern” according to Seattle’s bench coach at the time who knew him well. And there were, of course, more stories of the players really liking Martinez.

He has to have some familiarity with advanced metrics, coming from a decade at the Rays and the Cubs. He was considered to be at least partly responsible, perhaps the driving force, behind the Rays early use of defensive shifts. Mike Rizzo said Martinez is “someone who embraces the analytical side of the game.” And he was known as someone who worked well with young, developing players.

Martinez is no guarantee of playoff success, or even playoff entry. Girardi probably gave the Nats as close to the latter as was available, but he wasn’t the former, either. Martinez seems like a solid enough hire, he has all the right credentials a first time manager can have. The probability of a disastrous season is, however, much higher than it was with Dusty, simply because Martinez is a first time manager.

Of course, if the Nats get hit with significant injuries and don’t make the playoffs, people will say it is Martinez’s fault and blame the firing of Dusty for it all. If they are as good as 2017 but win one more NLDS game, they’ll say the move was brilliant, and that ownership knew what they were doing. Or, they could once again make the NLDS, lose in 5, and people will almost certainly talk about curses. Only time will tell if Martinez can do the job, but he’s got a great resume outside of actually managing a team and a bunch of great recommendations, for whatever that’s worth.