The Pretend Battle for Second Base 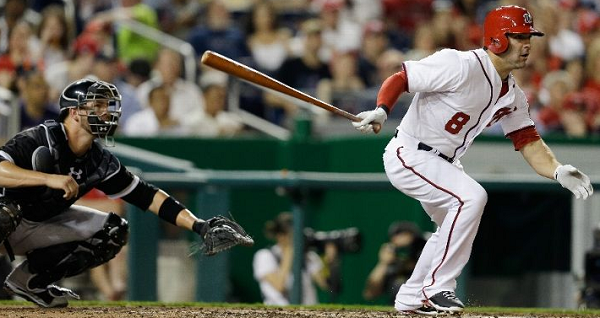 You know, it’s nice to go into spring training without worry about those silly “position battles.” For really the second year in a row, the whole lineup is pretty much constructed. More so than last year even, with pitchers #1-4 determined, the #5 spot Detwiler‘s to lose, the starting lineup all the way down to backup catcher and 4th outfielder already settled, it’s almost like spring training is just a warm up.

Which is doubly good because spring training is a time that talent evaluators really need to be leaned on for decision-making. The stats are as suspect as they come – an unbelievably hot or cold month is worth noting but good numbers don’t necessarily mean much against the talent level these guys often face in the spring.

So that’s that, see you next post… wait, what’s that you say? There is a competition for second base?

At least, that’s what you’d think, if you read through the world wide web of Nats reporters down in Viera trying to fill copy before games actually start in an battle-free February.

The fact is, unless Anthony Rendon looks completely lost in March (or hurt), and Danny Espinosa looks, well, as good as he did last March, nothing’s gonna happen. Even then I’m not sure it would happen. Rendon showed last year that he can handle Major League pitching, he wouldn’t be a bench player (he needs ABs at his age, so if he’s got no starting job… down to the minors), and he was an adequate defensive 2B.

Yes, there are issues with Rendon at 2B. While he isn’t bad, you are sacrificing defense when Espinosa, the best defensive infielder on the team, sits. And Rendon has an injury history that may limit his lateral mobility and probably scares the staff half to death every time he slides. But I can’t imagine them trumping the positives.

What can happen this spring is Espinosa may just secure himself a spot on the Major League roster. If he does well enough, he might actually get to be the backup second baseman and shortstop. Neither Rendon or Ian Desmond should be expected to play 162 games next season, regardless of health. If Espinosa is right, he demolishes the competitive mix of Jamey Carroll, the OBP-challenged Zach Walters, and Mike Fontenot.

If he gets that role, it leaves open the possibility of what I mentioned two months ago – for Espinosa and Rendon to play together, while Ryan Zimmerman moves to first. Jonathan Bernhardt mentioned this in an article linked from MLB.com today, but I don’t think he quite nailed it.

He talked about this as a possibility if Adam LaRoche “has a truly horrible camp or is injured”, but that’s not where I see it coming into play (although it could, if that was the case). Rather, I see LaRoche as essentially a platoon hitter at this point – he was horrendous against lefties last season, and the 2 of 3 seasons prior to that. If LaRoche sticks to form, he should definitely sit against lefties, not because Zim has “hit very well against them” as Bernhardt suggested, but because LaRoche is so damn bad.

Espinosa, on the other hand, is a switch hitter, but he’s always hit better from the right side – 100 OPS points better. There were even suggestions of turning him into a righty-only in recent years. So who better than to platoon with LaRoche than Espinosa? That’s if, of course, Espinosa shows up this spring.

Now that we’ve settled that, what I bet people found most interesting about Bernhardt’s story was his suggestion that Ryan Zimmerman could move to second base. I’ll admit, after scoffing at first (he’s just too big… they’re talking about moving him down the defensive scale, not up it), he makes some pretty solid points. He notes that Zimmerman

still has ample range and a great first step moves to second, where the fact that he had very serious and obvious problems with getting the ball quickly and accurately from third to first last season will no longer be a major issue.

It does eliminate the throwing issue, and take advantage of the fact that he is still an very rangey third baseman.

This probably isn’t the first thing the Nats are planning on doing right now, admits Bernhardt, but I agree that it does make some sense. Instead of lamenting about how Zim would be just an average hitting first baseman, just imagine how his offensive numbers would look at second base.

Now, Zimmerman is going to be 29 this season, and moving him to 2B at this point might not be the best idea – he’ll be slowing down and losing range at some point in the relatively near future. But it’s an intriguing possibility, and if the Nats think he really could do that, it opens up the possibility for acquiring a new 1B next offseason rather than giving the job to Zim, if that’s the plan.