Backed up into a Corner 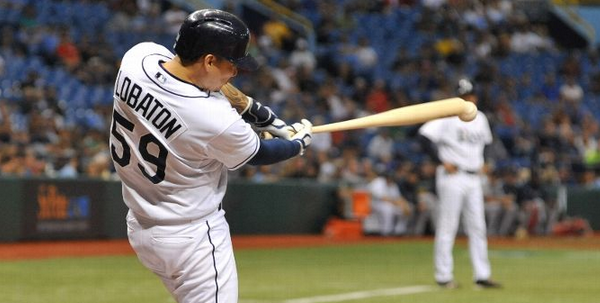 The Nats made a trade today, and while I at first I didn’t love the trade, it’s hard to blame them. They don’t have a viable backup, Wilson Ramos hasn’t shown he can stay healthy, and #2 catchers end up with 200 PAs even if the best of circumstances.

They traded Nate Karns, who made a few forgettable appearances in the majors last year, for Rays backup C Jose Lobaton. Whether or not it was Lobaton, they had to get a backup catcher, and with the options out there, they could have done worse. Meanwhile, the late new of some minor leaguers thrown in the deal is pretty interesting for the Nats.

Karns was not projected to be a future star, but Karns was listed as the Nats #4 prospect by Keith Law this month, albeit in a pretty shallow farm system. He stated that Karns “could be someone’s starter… although there’s no room at the inn in Washington right now.” The Nats probably won’t miss Karns so the question is more about whether or not they got real value for him.

Just getting Lobaton wasn’t enough, in my opinion, which explains my initial reaction. But the other minor leaguers – Felipe Rivero and Drew Vettleson – up the return and make it a better deal.

Let’s take a look at Lobaton first. As an offensive player he is limited, but he is a catcher, after all. He doesn’t have much power, but in his last two years he had an OBP right around .320. This past season he hit a little better overall, compiling a .249/.320/.394 line over 311 PAs.

He’s also a switch hitter, but last season he was much better against LHP. In fact, versus RHP, offensively he wasn’t any better than the other bad options the Nats have at catcher. He’s been better as a righty for the last few years, but going back to the 2011, 2010 and 2009 timeframe, he hit better as a lefty. So it’s hard to say for sure that he won’t hit.

Then again, it’s not a given that he’ll hit at all. He’ll be 29 years old and he’s coming off his first season as a full time backup, where he did well. But he wasn’t a great minor league hitter – just good enough to make you think he might be adequate in the majors. So it’s no guarantee he’ll be that good again. Still, he’s probably a better bet than Sandy Leon or Jhonatan Solano.

Lobaton is a mixed bag on defense. He blocks the plate well but has issues throwing out runners. Rizzo did say, though, that he thought he was better at throwing than his CS% indicates. Daniel Rathman of Baseball Prospectus sees the upside of Karns as well as the benefits of having Lobaton:

[Karns is] an intriguing piece to nab in exchange for a backup catcher, albeit one with strong hitting credentials and pitch-framing skills. Lobaton, a switch-hitter, owns a .274 career TAv versus right-handers. His main shortcoming is an inability to control the running game—opponents went 63-for-73 (86 percent) on steal attempts last year—but Lobaton’s other defensive traits mitigate that weakness.

Lobaton’s biggest claim to fame, you may recall, is hitting the game winning home run in the bottom of the 9th off Uehara in the ALDS last season. As a backup, Lobaton is probably as much as you can hope for, unless you get a minor league prospect. He’s not going to be great if Ramos is out for a real long time, but even a month of fill-in as the starter might be just fine. Assuming he hits like he did last season.

The other guys are legitimate prospects, not top prospects at the moment, but actual prospects. I say “at the moment”, because both were actually in the 2013 version of Baseball Prospectus’ Rays Top 10 Prospects list, from Jason Parks. And they aren’t in this year’s version, only mentioned as having “developmental years.”

Vettleson, #7 on that list, is an athletic hitter with a good hit tool. Parks mentioned he “could be .~275 hitter with good secondary skills (power/OBP); has the potential to hit 20 bombs; can swipe a few bases.” Parks really likes his swing, he’s got decent speed and plays defense well. What it translates to is quite possibly a 5 tool player without any one great tool, but good enough all around to be successful.

In his chat today, Keith Law said “Vettleson = potential everyday corner OF, plus arm, above avg hit, power may have been masked by home park/league in 2013.”

Rivero was also on Parks’ list in 2013, and the 22 year old LHP was coming off his first full season of pro baseball. He liked his fastball quite a bit, which is “jumpy in the low-90s” and said that while people aren’t sure where Rivero will end up “everybody agrees that the arm is of major-league quality.” His secondary pitches were more like potential strong pitches at the time rather than actual strong pitches (which is different than bad pitches). Some of the concern about Rivero is about his deliver and arm action, which might relegate him to the bullpen even if his other pitches develop.

As for this past season, Rivero also moved up from low-A to high-A, and his ERA was practically identical. But his K/9 went down and his BB/9 increased. That was probably his biggest difference between the two seasons, so it’s possible those secondary pitches haven’t shown any improvement and he’s starting to look like a reliever more and more. Not a bad thing, though, because he fastball is good enough to do that at the Major League level.

When I first saw the trade I wasn’t thrilled – not because I lamented the loss of Karns, I just wasn’t excited about the return. But there just isn’t much catching help out there. And while Rizzo deserves blame for not having a better backup catcher on the roster, they ended up getting one of the better options that’s out there right now. He’s nothing exciting, and there’s a decent chance for a disappointing year, but there’s enough there to think he won’t be awful.

Meanwhile, the big difference between when the news broke this morning and when the final details were released are the addition of the two minor leaguers. Vettleson bolsters their top prospect list, and Rivero might not be far off it either, if he is. So they ended up trading away one of their better prospects, who is pretty much MLB-ready but plays in a position that has a logjam, for a need position plus two younger prospects that bolster their farm system. Not a bad haul, after all.

This ends up being a win-win, in that the Rays could probably use Karns, especially with his salary, to bolster the back of their rotation, much more than the Nats, and the Nats get exactly what they needed. If Vettelson develops, though, this could look better for the Nats.

As an interesting aside – all 4 catchers we mentioned today and on of the two minor leaguers the Nats received are from Venezuela or Colombia. Only Vettleson isn’t from that part of the world.