Catching Up with Gio’s Fastball

Earlier this season we took a look at an underperforming Gio Gonzalez and his fastball, which seemed a little less zippy than it did in 2012. As the season progress, he improved but his fastball still looked a bit slower. Since then, and the last time we looked was way back on 6/4/13, his fastball, at least his 4 seamer, really looked good.

From a stretch in early June to mid/late July, his fastball seemed to have a pretty consistent velocity, and not just consistent. It was also around the velocity that he had averaged back in 2012, when he was the best Gio that ever played. Lately, though, his fastball has dipped again in speed.

That still looks a bit better than the chart did two and a half months ago. One thing that was pretty apparent back then was the correlation between the peaks and valleys of his velocity and his strikeouts. Of course, this correlation did not imply causality.

Pretty much immediately after that time, his velocity shot up but he was still relatively up and down with the Ks. Still, we do see that in the last 4 starts, his lowest velocity games are also his lowest strikeout games. That might be a little misleading, though, considering that the most recent velocity valley was a short appearance so it is obvious that he’d have fewer K’s.

Meanwhile, in the previous analysis, we noted that ERs might not have much correlation with velocity at all. But when we look at it this time, we see a little bit of a different story. 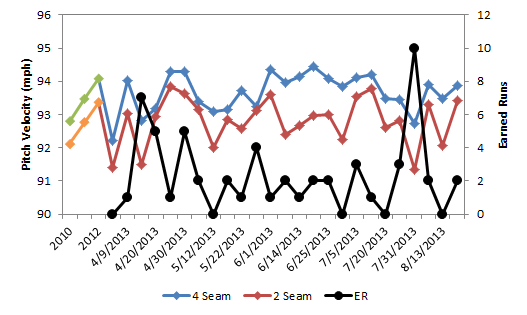 Maybe it’s just a coincidence, but as Gio settled into a groove with his velocity, he became much more of an effective pitcher. Now, it probably helped that this groove he settled into included a fastball that was around 94 mph rather than 93 mph. Perhaps backing up this velocity correlation, his worst outing, really his only truly bad outing all year, was when his velocity dipped lower than it had since early April.

What wasn’t entirely clear early in the year seems, at least from these data points, to be pretty obvious. When he throws the ball harder, he does better. It’s not entirely true in all cases, but take a look at that August 13th start, his second-to-last appearance. At first, it looks like his fastball was pretty slow, but his 4-seamer averaged 93.48 mph, the 4th slowest since early June. Yet 0 ER, albeit versus the punchless Giants, seems pretty good. The 2-seamer was slow for sure that day… but the 4-seamer was actually faster than most of his early season starts.

That meant, of course, that there was a big difference in the velocities. So why not, I thought, take a look at that? Let’s start with the difference in velocity between the 4 and 2 seam fastballs, compared with ERs. 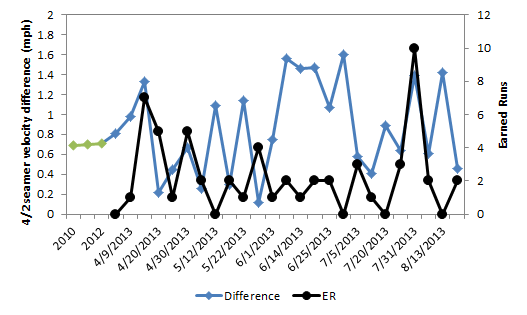 It’s a little tough to grasp totally what’s going on here, because the low ERA tends to match up with the high difference. Take a look at that stretch in the middle – a difference of over 1 mph between his two fastball grips, and a string of success. But even as the difference went down, he continued to have success, until that game with the huge jump. Knowing what we know, though, that was the game where he had low velocity. Let’s take a look at that difference against strikeouts now 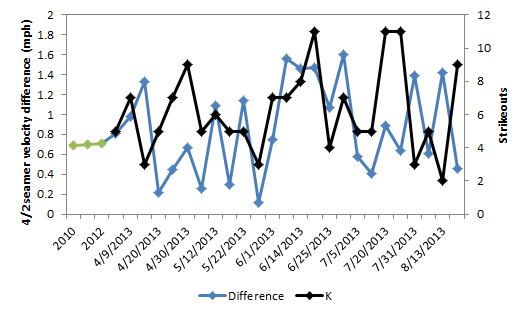 The strikeout chart, where high strikeouts you’d think would correlate to the higher difference in velocity is a little hard to tell. Just taking that middle stretch, he did strikeout more hitters each outing, and had a high difference in velocities. But we know that those games also had high velocities on the 4-seamer. And then the last few starts don’t make a ton of sense in this particular chart – he had two 11 strikeout games in a row in which the velocity difference was below 1 mph, then a few games where the difference jumped up and the Ks dropped.

So I’m not sure that the difference is quite as important as the overall velocity itself, especially the velocity of the 4-seamer as opposed to the 2-seamer.

What does it all mean for Gio? Well, the logical conclusion is not a surprising one. It appears that when he throws harder, he does better, and when that’s coupled with a bit of a difference in velocity between his 2 fastballs, that helps as well. It’s nothing earth shattering for sure. But it does help explain some of his ups and downs this season.

That really got me  thinking. How well has he pitched over the year, depending on what appears to be that most important of inputs, his 4-seamers’ velocity? So I threw some sumproducts into Excel and came up with a chart showing a few different results

The first column is his whole season, a minimum of 0 mph as our baseline. It’s not entirely surprising, but what it shows is that this year, any time his 4-seamer has averaged over 93.0 mph, he is the 5th best pitcher in the NL, in terms of ERA with a 2.62. Anything above 93.5 mph and he is the third best, behind only Kershaw and Harvey.

His K/9 don’t change significantly, but he does have the best K rate when he is throwing his hardest. And he has the worst when he’s throwing the softest.

One question that comes up, though is why is his ERA not as good when he’s throwing above 94 mph? Well, some of that is probably due to a sample size. Only 58 IP over 9 starts in those cases, and to compare it with the >93.5 mph category where he only has 5 additional starts and 34 1/3 additional innings is even less accurate. But one thing that might add some color is that mph difference we talked about earlier. Here’s the table with that listed

It’s possible that the 93.5 mph+ category is a bit of a sweet spot, where Gio is throwing it hard and has a bigger velocity difference between the two fastballs. But we are probably already on shaky ground here with the sample sizes and the velocity differences, which aren’t that variant, so I don’t want to draw too much from that.

Either way, it seems that Gio’s “poor season” (and I mean that he doesn’t have the stats he did last year, he still has an ERA+ of 112) has a bit of an explanation. Whenever that fastball has got some real heat to it, he’s a much better pitcher. In fact, he becomes one of the best pitchers in the game, at least by ERA. Now all he’s gotta do is figure out how to throw that hard every game.