Jordan’s Got Groundball-Ability, and Maybe More 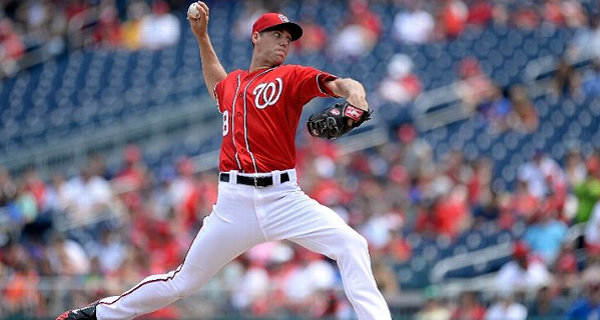 Yesterday was certainly a fun day for the offense, and if you score 14 runs, people are probably going to pay quite a bit of attention to that. But I’m thinking more about what a young pitcher did, and why I was so impressed by it.

Taylor Jordan finally got his first win yesterday, although he’s pitched well enough in several other games to help show off why the Pitcher’s W is considered a silly stat by many in baseball. But you better believe it mattered to Jordan, and it was exciting to see.

Jordan has been very good so far, not unhittable by any means, but impressive nonetheless, thanks to his sinker. He gets hitters to hit the ball on the ground. Like everyone else who does that, it allows him to walk tightropes and get out of trouble even when his stuff isn’t spectacular. If the ball doesn’t get hit in the air, teams need to string together quite a few hits and walks together in order to score more than one or two runs. 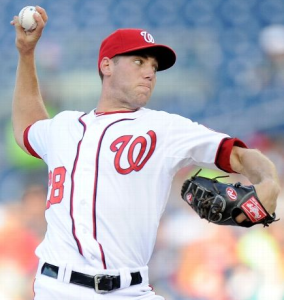 Jordan sits just above the great Tim Hudson (#9, 1.30), who has been known throughout his career not as a strikeout guy, but as one who has a career ERA of 3.44 (124 ERA+) thanks mostly to his ability to induce ground balls. This is over the course of only 6 games for Jordan, but it’s a great preview of what he could be, and shows why the Nats like him so much.

That groundball capability is going to make Jordan a useful pitcher no matter what else he does, but yesterday he showed off much more than just a sinker. Jordan struck out 7, which in itself is pretty impressive. It was a good game, and it’s not like we should be reading so much into this. He hasn’t turned into Gio Gonzalez or Stephen Strasburg, big time strikeout guys.

But this is also a guy who only struck out 7.2 per 9 in his minor league career. And the rate has gone down as he’s advanced up the minors. Now, 7.2 isn’t a tiny number, and that works just fine for many Major Leaguers. But if you’re doing that in the minors, it’s probably a safe bet that you’d strike out fewer MLB players than that.

Jordan is a guy known for his strong sinker, and his ability to get ground balls, it isn’t surprising that his fastballs get hit alot, that’s kind of what he’s known for. But he’s doing a very good job with his offspeed stuff, and that may be the real key to his success so far in the majors. Out of his 7 strikeouts, 4 were on sliders, 2 were on changeups and one was on the fastball.

Thanks to the data from Brooks Baseball, we can see that Jordan is doing a good job of getting hitters to swing and miss at his changeup and his curveball. Here’s their chart showing what he’s done in the majors:

Take a look at a couple of real strikeout pitchers, the aforementioned Gio and Strasburg. Gio’s whiff rate on his fastballs are high – over 37% for his 4-seamer, 31% for his sinker. That’s a good reason why he’s struck out 136 in 130 1/3 IP (9.4 K/9). But his offspeed stuff is lower, only 9% on his change. His devastating curveball is at 21%, very close to what Jordan is doing.

Strasburg, who is currently sitting at a robust 127 Ks in 123 1/3 IP (9.3 K/9) has a much lower rate than the other two. His 4-seamer is only at 7%, his sinker is even lower. His curve sits at close to 14% while his change leads the group at 23%. This is much lower than Gio’s rate, and doesn’t hit Jordan’s rates on the offspeed stuff, either. Strasburg uses his 4-seamer a TON though, throwing it more than 50% of the time, so it is actually his most whiffed-on pitch. This usage rate is significantly higher than any one pitch by the other guys, who don’t throw any one pitch more than 40% of the time.

What does this all tell us? Well, maybe not much, but I wanted to use these data points as a comparison. Jordan’s been able to get swings and misses on his offspeed pitches – not just guys watching stuff. This might be a good sign that he’s keeping hitters’ guessing, or that they’re not able to tell what pitch is coming by just seeing it, or both.

These high whiff rates may not last as he pitches more and more, but they are robust enough to suggest they won’t go away entirely. If he keeps hitters off balance with the changeup and the slider, he’s going to be very effective. Because even without the swings and misses, his groundball rate is great. He’s already established himself as a solid pitcher, and it’s no surprise that the Nationals and prospect gurus see him as at least a potential 4th or 5th starter on a good team. If he can consistently miss bats, too, watch out.