Nats Finally Get Some Bullpen Help 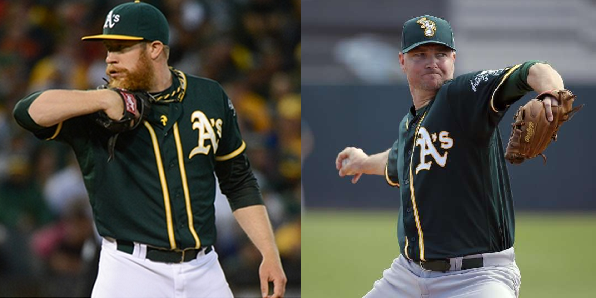 The Nats finally did the one thing everyone’s been waiting for – they traded for a closer. I’m just not sure which one he is. They acquired Sean Doolittle and Ryan Madson from the A’s. Neither was Oakland’s closer at the moment, both have been good closers before, and both will probably earn saves for the Nats. And both are really, really good relievers.

So let’s start with that – both have had relatively good careers coming out of the bullpen, both have saves, and both have looked strong this season. Doolittle has more recent saves, but Madson was the A’s closer last season. On ability alone, Doolittle would probably get the nod as closer, but he should have some usage restrictions, which could give Madson the job. Either one is a significant improvement, and both are better than anyone else currently in the bullpen. I really like this move, and even if they gave up more, I’d probably be happy with it. But before we get to what they gave up, here’s what they got…

Doolittle is a lefty, and while he does see some platoon splits, he’s been very effective against righties throughout his career – to the tune of a .699 OPS against them. He’s a strikeout pitcher, with a career K/9 of 10.7, and numbers higher in his best years (and an impressive 13.1 right now). He’s also got really good control, his BB/9 is a miniscule 1.7.

He throws a 4-seam fastball that Brooks Baseball says has a rising action. He uses it surprising amount of the time, 88% over his career, the same number since the beginning of last year, and it sits at nearly 95 mph. It’s a swing and miss pitch, which is obvious considering the number of Ks he gets without throwing much of anything else.

The slider is his next most frequent pitch, which also gets its share of whiffs. He’ll throw an occasional changeup as well, although not as frequently. He’s thrown a splitter here and there, but he doesn’t use it much. So,

He was drafted in 2007 as a first baseman out of the University of Virginia (he hit in the same lineup as Ryan Zimmerman) with what Baseball Prospectus called a “picture perfect swing.” But he couldn’t stay healthy at first, with some pretty devastating knee injuries, and there were questions about his power.

So the lefty was moved to the mound when he finally recovered in 2011, probably because of the 90+ mph fastball coming from the left side. He debuted in 2012, looked even better in 2013, and by 2014 he had made his way into the closer role where he earned 22 saves (which seems really low but the next highest guy had 3). That year he was named an All Star and struck out 89 hitters in 62 2/3 IP (79 of those were on fastballs!).

Unfortunately, he missed most of 2015 with shoulder injuries. First, he had a slight rotator cuff tear. He came back, pitched a game, and immediately returned to the DL until late August. He has battled shoulder injuries since, missing much of 2016, as well as part of this season.

The thing is, Doolittle is great when he’s healthy. According to Beyond the Box Score:

“Since his debut in 2012, 141 relievers have thrown at least 200 total innings according to Baseball Reference’s Play Index. Among those 141 relievers, Doolittle ranks eighth in OPS+, eighth in FIP, 14th in strikeout rate, and sixth in walk rate… In fact, since his debut, no reliever has thrown a higher percentage of strikes than Doolittle’s 71 percent”

About the only knock on him is that he gives up a few too many HRs. Doolittle is cheap for a closer or top-tier setup guy, expensive, I guess, if he can’t pitch due to injury. He’s only owed $4.4 M next year, with team options of $6M and $6.5M in 2019 and 2020. If he stays healthy, his contract is a crazy good bargain.

The Nats got an outstanding pitcher, one who can close, they just probably have to limit him to no more than two games in a row, and do whatever else they can to keep him healthy short of not actually letting him pitch. He’s a big risk in terms of health, but a sure thing in terms of ability.

Also in this trade was another potential closer for the Nats, and another one with an interesting history. Madson was the best reliever, an all-purpose fireman/setup man/occasional closer on the 2008 and 2009 Phillies’ World Series teams, before becoming the closer in 2011. But, when he reached free agency, they went with some free agent from the Red Sox with anger issues instead.

Madson got a one-year deal with the Reds to closer there, but never pitched a game for them. He had Tommy John surgery in the spring of 2012, but he didn’t make the standard recovery. Instead, he found that he couldn’t throw without pain, and had to rework his delivery. It took him an extra year just to be able to throw without pain, and after that he spent all of 2014 rehabbing before finally making the 2015 Royals as a Spring Training invite.

He credits an electro-stimulus device to finally getting him on the road to recovery and back to the majors. And it worked. He was great as a setup man with Kansas City, winning a ring after not pitching in the majors since 2011. His 2016 wasn’t quite as good, but he’s been better in 2017, with his strikeout rate up and his walk rate down.

He throws a 95 mph fastball, as well as a curveball and a changeup which both sit in the low-80s. He’s got a year left on his contract, owed $7.6 M next year. Although he’ll be 37 then, he’s shown no signs in lost velocity, perhaps because of all of those missed years recovering from surgery.

Madson’s strikeout rate once hit the 10 K/9 mark, but his career rate is only 7.9. He’s so good because he combines this pretty good K rate with a low walk rate and an ability to keep the ball on the ground – his 51.5% GB rate ranks him in the top tier of relievers, although not at the very top. He also ranks 20th among all relievers since he returned in 2015 in soft contact and 18th best in hard contact.

There isn’t one thing in his peripherals that jump out, but he does everything well. He’s a nice foil to the strikeout machine in Doolittle. If you believe the TJ surgery is behind him, and the electrodes will keep him going, he’s a more reliable and less-flashy acquisition compared with Doolittle.

The Price they Paid

The Nats gave up some prospects to make this trade happen, that in itself isn’t surprising. What is a bit surprising is the level of prospects they had to give. Neither of the guys were in their very top tier of prospects, something that was almost expected to have to be sacrificed in order to help this bullpen.

Jesus Luzardo is a lefty who throws 95 mph and has real potential. He was a typical Rizzo draftee – he would have gone higher if not for needing TJ surgery – and may be a good reliever some day. But at only 19, with 3 starts in rookie ball under his belt, he’s pretty far from being a known commodity, and further from the majors.

Sheldon Neuse is a third baseman who has hit well in low-A Hagerstown, and probably makes the back half of their top 10 prospect list. He isn’t overly athletic, and may not be able to stay at third, but he looks like he could be a major leaguer some day.

Both are players you’d like to see the Nats try and develop, and both are the kind you’d be happy to trade for real help before you get rid of your best prospects.

They also gave up Blake Treinen, and he will probably end up doing quite well for the A’s. He has the stuff to close, just not the mindset right now. They may figure out how to make him successful in that role, but if not, he could be great in the sort of role he had last year. But Nats fans don’t want to see him in a high leverage situation for them anymore, trading him probably works out well for both sides.

Finally on the Road to Bullpen Recovery

The Nats ended up with two guys who can close, and they both probably will earn saves this year. Doolittle has the eye-popping strikeouts, and if they can keep him healthy, he’s the kind of reliever that can be a difference maker in October, he’s that good. Madson is very good himself, and although he too throws 95 mph, he’s not the best at any one thing, he’s simply good enough at everything to be a very good reliever.

Additionally, they didn’t get rid of any of their top tier prospects. It leaves them room to either go after one more closer/setup type, or trade for another solid reliever who’ll never have to close but can still help strengthen the bullpen. I really like this move, but I hope they’re not done with this one move.

Bolstering the bullpen wasn’t an option for the Nats this month, it was a necessity. Doolittle has health questions, Madson isn’t a typical closer, but if the Nats succeed this postseason, this trade will be a big part of the reason.