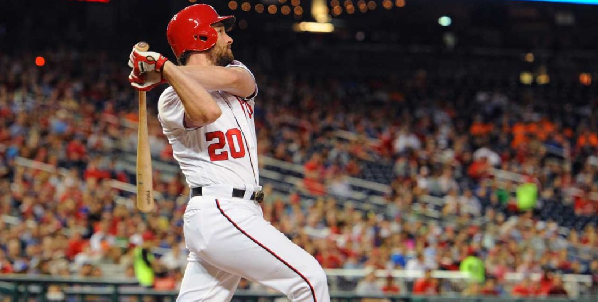 Was Daniel Murphy, who played a bad defensive second base all year and finished 2nd in MVP voting, robbed? Not by the voters, who got it right, but by his team, who played him at a position that he can’t play that well? If he was a first baseman, would his playoff-player leading hitting have gotten him the award? I’ve been thinking about this for a while.

I don't think Murphy will win the MVP because defense matters. But if he played 1B all year…

Not all the time or anything, I mean, there was the whole winter where I didn’t really think about it. Maybe once or twice I did, mostly though I had my mind on other things… that’s not the point of this!

The point is, can we imagine a scenario where 2016 Daniel Murphy, playing first base, gets the MVP award? Lots of elements help decide who people vote for, but nowadays WAR definitely does play a factor. I decided to build out some scenarios to see what Murphy’s totals, playing first base, might look like. Let’s start with the real numbers from 2016.

This is the baseline – what actually happened last season. Murphy finished 6th in NL position player fWAR, not too bad.

And he was 4th in offensive value. Here is what his high-level fWAR calculation looked like in 2016

Essentially, you sum up the offensive and defensive value, in that middle section, as well as a league adjustment and a replacement player value to get RAR, which is divided by runs per win (a league-wide stat between 9 and 10) to get WAR.

The problem with this whole thing is that Murphy, if you look by offensive rate stats, did better than that 4th place ranking. He actually ranked second in wOBA and wRC+, behind only Joey Votto. This is, of course, because of his butt.

Murphy had a buttocks injury which limited his playing time at the end of the year, as the Nats were comfortably in first in the NL East and were resting him in preparation for the playoffs. Since WAR is fundamentally a counting stat, the most likely answer is that, no, even if he played first all year he probably didn’t have enough PAs to win the WAR race. We’ll have to compensate for that in order to make an apples to apples comparison with the rest of the league leaders.

Looking at the top of that leaderboard, the top three guys each had around 690 PAs. I’ll put Murphy, an older player who was gonna get a few days off at the end of the year regardless, at 675 PAs. That seems like a realistic number for a healthy, full season for him.

To keep the math simple, we’ll adjust all of his numbers that are PA dependent to create a new number as if he had 675 PA. In other words, multiply by a factor that is 675/582 (582 being the number of PAs he actually had). Doing that, we get to what a full season of Murphy looks like

Adjusting his batting value, baserunning value, and his fielding value all by that factor, gives a new set of numbers. I also had to change what the replacement level addition is (that third column from the right) because it, too, is PA-dependent.

The positional adjustment would technically change a bit, and it would go up, but the delta wouldn’t be significant and I’m not positive I’d calculate it right, so I’m just gonna leave it as is.

What we get makes sense, we could have just multiplied the WAR number by that same (675/582=1.16) factor and gotten the same answer. You play more, you have more value. So, if Murphy had played more, he would have been better – good enough for third best fWAR. But that’s not why we’re here.

Let’s move him to first base.

Scenario #2 – Murphy moves to first base

One thing we have to first figure out, if we’re moving Murphy, is what kind of first baseman he’d be. That number that goes into the “fielding” column is easy to find on a player page at fangraphs, at least theoretically. It’s their UZR/150 for the year. Murphy’s, as a 2B was a not-so-nice -6.9 last year. His fielding value was lower because he played other positions which brought that number further down.

But this number gives us something to work with. We can see that for his career, he has a +5.9 UZR/150 as a first baseman. So we could just plug that in as a speculative defensive value. But I’m not inclined to believe that number. UZR/150 is known as a number that needs a significant sample size to really make sense – like, even more than a season’s worth of data. And the +5.9 is mostly on the back of a very strong 2009 campaign at first. Since then, not so good.

This number would put him among the upper echelon of defensive first basemen, and I’m not ready to put him there. But I think he’d be alright, so let’s just give him a +1.0 UZR/150 at first. That puts him in between Paul Goldschmidt and Adrian Gonzalez in 2016.  Alright, enough of that, let’s see how much better he is…

Ok, did I say better? It turns out that moving Murphy to first base, despite his bad second base defense, actually brings down his value. This comes from the positional adjustment for first basemen, which is just brutal. I don’t want to litigate that here, but it does brings up a few thing worth addressing.

First, it’s really quite a bit harder for a great first basemen to sit on top of the leader boards compared to other positions. There are reasons for this, of course, and we don’t need to dissect that at the moment.

Second is that it should give some perspective on the limitations of the WAR leaderboard. Moving a guy to first base does diminish his value, and so, yes, he is worth less than if he hit just as well but played a different position. But simply looking at the WAR numbers could mislead you on the abilities of players.

Alright, so the original idea didn’t work at all. But, what if he played third base? Let’s check that one out.

Scenario #3 – Murphy moves to third base

Since we are already into fantasy scenarios, what if the Nats had played Murphy at third base all year? Let’s pretend they moved Anthony Rendon back to second base and let Murphy play third. This actually wouldn’t be the first time that Murphy played third base. He did it on and off with the Mets, and ended up there a few times with the Nats last season.

His career UZR/150 there is -1.6, although he had played so few innings there it’s hard to know how he’d actually do. We need a number, so I assigned him a -1.0 on the season. This actually would have put him at the high end of the bottom third of qualified 3B in 2016, right about the same as Maikel Franco.

As far as positional adjustment, third base and second base are actually the same, so I’ll just leave that number be. And into the calculating machine it goes

That number looks quite a bit better, although, it’s only different than his 2B number because I’m assuming he’d be a much better 3B. If he magically became a better 2B the numbers would do the same thing.

But it is more realistic, lineup constraints aside, that he’d be a better third baseman. Those numbers could actually be a decent reflection of the alternate reality.

Moving Won’t Do It

Unfortunately, it still probably doesn’t get him the MVP award. Sure, he hit better than Bryant, but even if they were playing the same position, Bryant would likely still have been seen as the more complete player. And his fielding and baserunning prowess would have backed that up, keeping him at a higher WAR.

Then again, if Murphy had played third, or even second, there is a chance that those who thought Murphy couldn’t win due to poor defense would have felt they had reason to vote for him. He would have been the most productive hitter in the NL other than Joey Votto, who wasn’t on a playoff team and therefore isn’t allowed to get votes, or something like that. Of course, they’d be wrong, Bryant was still better.

The numbers just don’t add up. Murphy didn’t get screwed over by remaining at second base, he wasn’t the MVP anyway. But now we know.