Imagining the Season with the Nats Current Bullpen 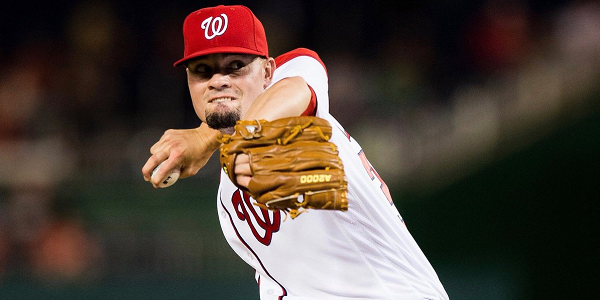 Like it or not, the Nationals bullpen may not change much before April. With the signing of Greg Holland by the Rockies, it’s starting to look like a well-known closer is not walking through that door, fans. So, are they doomed? Of course not, they have some obvious, in-house closer options.

And if you’re worrying about closer, you’re probably worrying about the wrong thing. They have guys who will make for perfectly cromulent closers. It’s just that, they have a thin bullpen. Acquiring a star closer would have both given them a star closerand pushed their current potential closers into 7th and 8th inning roles, leaving more room for unexpected poor play, or injuries.

So, let’s take a look, at what this bullpen’s season would look like in two different scenarios – one good, one bad – to see how good it might be, and how bad it might be.

Starting with the the potential good scenario, the first thing to note is the obvious one – everyone stays relatively healthy. And when a guy gets hurt, it is short-term, and it’s next man up… they get by just fine. As for the individuals

A wholly realistic scenario for sure. If the Nats can pull this off, they won’t mind not having a big name closer. They might get most of this and decide to do something similar to the Melancon trade, getting a guy like Steve Cishek or Jake McGee before their contracts expire.

But it depends on health and recovery from Kelley, Solis and Collins, and growth and improvement from Gott. They’d also be fine if most of these things happened and only one, maybe two didn’t. But much more than that, and it’s going to be a struggle.

Speaking of  struggle, here’s the alternative scenario that isn’t so hard to imagine:

With the above issues, the Nats have to turn to a bunch of second-tier guys who aren’t ready or may never be. They end up with way too many innings from journeymen Rafael Martin, and Josh Outman, the wild but 100+mph fastball throwing Jimmy Cordero who looks really impressive as he walks everyone, and unproven lefties Matt Grace , whose stuff doesn’t translate to the majors.

Collectively, they don’t look awful, but the Nats blow too many leads to keep up with the rest of the NL East, and a close race turns on its head and they actually lose the lead after blowing a few games… oh wait now I’m just reading the 2015 obituary.

The Nats are not doomed to repeat 2015’s fiasco in the bullpen. First of all, they can’t even trade for Papelbon if he’s not on a team. In all seriousness, they have some real talent there, even if the names aren’t going to impress anyone. They had solid bullpen numbers last year, albeit with Melancon. Kelley and Treinen just have to continue doing what they’ve been doing, Solis and Glover just have to be healthy, and one or two more things have to go their way for it to look quite good.

But the problem, at the moment, is that the alternative is way too possible. Getting another reliable arm, even if it’s not a closer, just to prevent the thin bullpen from being run through, seems prudent. Until that happens, I think I’ll pray that Koda Glover is about to be a big time star.