Gio Should Get His Shot 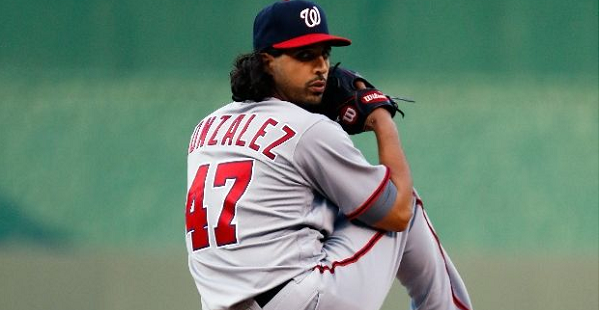 The latest news on the Nationals pitching staff hopefully heralds the return of Joe Ross. It remains to be seen whether Ross will start in the playoffs, and whether he can.

If Ross does indeed come back healthy and his endurance is there, it seems like a no-brainer to start him after Max Scherzer and Tanner Roark (and, if Stephen Strasburg can make it back, after him as well). And his overall numbers do suggest putting him ahead of Gio Gonzalez.

But, I wouldn’t have said it seems like a no-brainer if it was. Hitters have a .705 OPS against Ross, while Gio has a similar .714 against him. And Gonzalez’s FIP is 3.85, compared to a slightly better 3.55 from Ross, while Gonzalez actually has a much better DRA than Ross (3.19 vs 4.50!). So the difference might not be as stark as the basic pitching line indicates.

More importantly, though, Ross is the only right-handed starter in the Nats rotation who hasn’t held his own against lefties. They have an .816 OPS against him, and he didn’t fare much better last season, either. Righties were held to a .600 OPS, and that’s where he was most effective.

Gonzalez, on the other hand, has held lefties to a .579 OPS while righties have a .751 OPS against him. Perhaps surprisingly, Gonzalez hasn’t faced as many lefties, as Ross, despite starting 13 more games this year. Opponents stack righties against him, and send as many lefties as they can to face Ross.

This all matters because the presumed opponent, the Dodgers, can bring a starting lineup with 6 credible left handed hitters, a lineup that almost asks to face a left handed starter. Although putting Gio in would get an outfield substitution or two, the infield would not change.

With a lefty-heavy lineup , it makes sense for Gonzalez to get the nod over Ross.  It’s close, something that might not be apparent unless you look beyond their high level numbers this year.

What is apparent, however, is that the Nats need to be prepared to use their bullpen in these starts. Gonzalez has only complete 7 IP in four of his 29 starts. Ross did it in five of his 16, but with his history against lefties, you can bet that would be a longshot in the NLCS.

Chances are the Nats will have to pull either starter early, and that means they need left handed bullpen arms. Thankfully they picked up Marc Rzepczynski, so they have one credible lefty reliever.

But I pluralized arms because they’ll need more than one. Sammy Solis isn’t yet healthy. Oliver Perez has been awful this year, although in September he’s been good in his five one-batter appearances. Sean Burnett is making the case for himself as lefties are 1 for 9 against him. Same goes for Matt Grace, they are 1 for 5 against him. Both need more opportunities over the last two weeks of the season.

At this point I lean towards using Burnett, but whoever it is, one of those pitchers will need to be on the team, in addition to Rzepczynski. This is in part because they’ll need the flexibility that two lefty relievers would give them against the Dodgers in any one game, and in part because there’s a good chance they’ll use a lefty reliever in each game. It wouldn’t be crazy to go with three lefty relievers, but that may be hard for them to swing.

The Dodgers are too loaded with lefties for the Nats to ignore. They should come with at least two lefty relievers in the bullpen, and Gio Gonzalez deserves a start against them.