Nationals Get Their Melancon 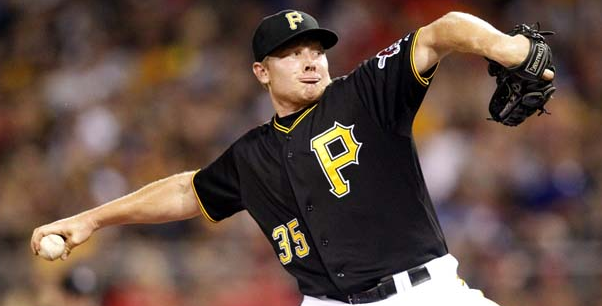 The Nats were in need of a closer, and they went out and got one, acquiring Mark Melancon from the Pirates for Felipe Rivero and Taylor Hearn. Melancon has been closing games for Pittsburgh since 2013, before that he was on a few teams, with mixed success. He came up with the Yankees, where he was one time regarded as the closer of the future and eventual successor to Mariano Rivera.

Before we launch into all the stats, which are great, let’s see what he’s actually doing out there. He doesn’t have a blazing fastball – his four-seamer actually sits around 92 mph. He doesn’t throw it all that much, anyway.

Instead, he predominantly uses a cutter, throwing it 64% of the time over the last 3 years. That’s a really high ratio for any single pitch. It’s described by Brooks Baseball as having “some natural sink and strong cutting action” so maybe we’ll see some broken bats.

Besides that, he’ll throw a curve, a bit more against righties than against lefties. The pitch is fun, it’s got 12-6 action, it’s an extreme ground ball pitch, and he uses a knuckle-curve group. It’s also effective, it’s pretty close to impossible to square up – hitters have a .153 average against that curve, and a .182 slugging for a measly .029 ISO.

The only other pitch he next most-frequently used pitch is the four-seam fastball, which he uses around 10% of the time, give or take. It sinks a bit, but he probably uses it to keep hitters off balance more than to put them away, it gets hit pretty hard.

So, cut fastball and knuckle-curve, no doubt learned under the tutelage of Mariano Rivera and Mike Mussina, respectively (I’m kidding about the specific pitches, although he has cited Rivera as a big influence), and that’s pretty much it. It may not seem like much, but they both really get the job done.

On to the Stats

How well do they get the job done? Well, if we look at the basic stats – they’re really impressive. He’s owned an ERA under 2.00 over the last 4 years, and has a sub-1.00 WHIP

If you’re into that “proven closer” thing, he’s got that, too…

As for the “peripherals”, well, those look pretty good, too. You’ll hear that Melancon is all about contact – but it’s not like he doesn’t strike guys out. Since becoming a closer in 2013, he’s posted a K/9 of 8.3. This is nothing like the 10+ K/9 that elite relievers tend to have, but it’s still pretty good.  And, while nobody is Mariano, that is where he learned his cutter, and Mariano proves you don’t need to strike everyone out to be a great closer. What’s nice is that he walks almost nobody, giving him a K/BB ratio of 5.74.

Over the last three seasons, when he’s really been a full-time closer for full seasons, there have been 57 relievers with at least 150 innings pitched. Of those he’s got the third lowest walk rate, the 5th best K/BB, the 4th best HR rate, the 5th best WHIP and and the 8th best ERA.

Where he really excels though, is getting people to hit the ball poorly. He’s got the 5th best soft contact rate and the 10th best ground ball rate.  And when it comes to batters, exit velocity off of his pitches is the lowest in the league:

And among 298 pitchers with at least 200 batted balls in the Statcast era, Melancon owns the lowest exit velocity.

It’s hard to be upset with the trade from the Nats side. They needed a closer, and the market wasn’t in their favor. They gave up a non-prospect and a major-league reliever with many years of control left, but they didn’t give up any of their top prospects. And sure, it’s easy to see why the Pirates would want Rivero – he’s got real strikeout stuff, he’s a left who can get righties out, and he’s not a free agent until 2022.

But it’s also understandable why the Nats were willing to move him – he has struggled at time this season, even if it is through overuse, and if he is a future setup man or closer, that may not really be the case until next year or the year after. He is, in other words, a replaceable asset at a time when they need a closer right now.

I’m not going to go as far as saying Mike Rizzo fleeced the Pirates. They may end up with their closer of the future out of this deal, in exchange for a guy they were going to lose in 2 months anyway. But the Nats got exactly what they needed for this season, and didn’t have to give up too much to get it.