Lopez, Not Good but Promising, and His Uncertain Future 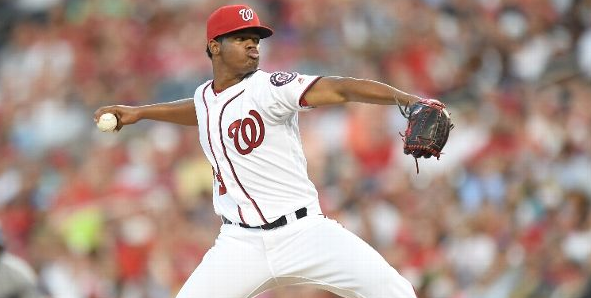 It wasn’t a good start, but it is hard to call Reynaldo Lopez’s debut last night awful, either. He started out poorly, giving up seven hits and four runs to the first 11 batters he faced. But he did settle down after that, getting the next eight consecutive hitters, before giving up two more runs in the fifth inning.

Ten hits and six runs over 4 2/3 is bad, but he struck out nine hitters. That was the most in a MLB debut for any National other than Stephen Strasburg, and his ER and K combo was a rare feat.

Early on, he demonstrated control, but he lacked command. Mike Maddux has talked about how essential fastball command is, and Lopez didn’t have it. He was throwing strikes (good!), but he was leaving too many out over the plate and missing his spots (not good!).

There was a thought by the Nationals that he would be able to get away with more because his fastball was so darn fast. Instead, 98 mph also may have had hitters sitting on a fastball, just to catch up. Also, his fastball doesn’t have much movement and his delivery doesn’t have much deception. Eight of the ten hits he gave up were off of his fastball.

But as he got his sea legs under him, he demonstrated just why people are so high on him. Despite a reputation for so-so secondary pitches, the curveball was pretty devastating. Perhaps this is more evidence of hitters sitting on his fastball – all nine of his strikeouts were on those secondary pitches.

He seemed to have a great feel for the curve ball, throwing it where he wanted to and making hitters look silly with it. Exactly three curveballs were even touched by a bat, generating a foul ball and two singles. He had 14 swinging strikes, but only were on five fastballs. He struck out nine, but not a single one of them were from fastballs. He finished with five swinging strikeouts on curveballs, three backwards Ks on curves and one on a changeup.

Lopez is a work in progress. He needs to improve on his fastball command, although once he mixed his pitches up a bit he looked better. Changing speeds more, maybe mixing in a two-seamer or cutter, would keep hitters guessing enough.

The Nats insist they see him as a starter, although many outside the organization see him more as a late-inning reliever. If the Nats truly believe he’s a starter, he’s got the kind of stuff that makes you think he could be a really good one. With six years ahead of control at a reasonable salary, even if it takes him a couple of years to get there, that’s a hard guy to lose.

Lopez seems to be a part of every trade rumor involving the Nats, and if they want a late-inning reliever, they may have to trade him to get one. He doesn’t appear ready to be a closer today, so if he’s destined for that job, he probably wouldn’t have it with the Nats for another year or two, and that doesn’t fulfill the team’s obvious need for 2016.

Either as a starter or a reliever, he might not really help this season. Something like the time-value of money, the Nats must weigh what Lopez’s future seasons will be worth, and discount that compared to 2016 help. If the Nats think his destiny is that of a reliever, even a closer, the math looks a little different.

They may even end up using him in the bullpen this year – regardless of what they see as his ultimate destiny. If there’s any thought that he could help in October, they’ll probably want to see him come out of the bullpen in September.

He certainly has the stuff to compete and even, at times, dominate at the major league level, but he didn’t look quite ready yesterday. Patience will pay off with him, but is patience in the Nats best interest? If he is a starter, it probably is, because he’d be so valuable. As a reliever, it’s less clear.

If Lopez pitches in the bullpen this season, that may have nothing to do with how the Nats view him, it may just be addressing a need. What happens with Lopez at the trade deadline may be a better indication of what the Nats really believe is his role in the future.