I’ve said it before – it’s probably now or never to sign Bryce Harper. His salary will jump significantly in 2017, and then it’s just too close to free agency for him to take any deal. But he’s only going to make $5 M in 2016. An extension starting now might actually be intriguing to him. And the Nats are talking about it, at least “informally”

Harper is going to break the bank when he signs. But when asked about it, he said, “Whatever people are talking about money, you can’t limit put a limit on players. You can’t put a limit on whatever they do. Whether that’s on the field or off the field. Don’t put limits on guys.” What does he mean by this?

Is it just not limiting him to only $400 million? Maybe the Nats can get creative, and sure, give him plenty of money, but how about not limiting his contract to money? Here are a few suggestions for the Nats:

A lifetime supply and a blessing to do it in his old style. Maybe he could start an eye black company, and the Nats could promise to buy all their eye black from this company for 20 years or something.

Harper is really into style – how about the Nats support him there? Set him up with some professional designers, create a company for him to own and he could build the Bryce Harper fashion line! You, too, could wear pants that Jayson Werth mocks. Or maybe it will be a fashion/health line. Bryce could open a store that’s like a GNC/[insert your own name for a designer clothing store that I don’t know] combo. Speaking of owning companies…

Bryce wants to make lots of money and not have himself limited? How about a stake in the team? An ownership stake seems easier on the team’s ability to sign other guys than some $50 M contract. There is also some evidence that players and ownership have a sort of unspoken agreement to limit the very best player’s salaries, and an ownership stake could look better, even if it gives Bryce more money. Plus, it would allow two owners to put on a uniform and shag flies!

The Nats have yet to name the stadium, and this gives them the perfect opportunity. Bryce Yards and Nationals Park? Maybe too close to the 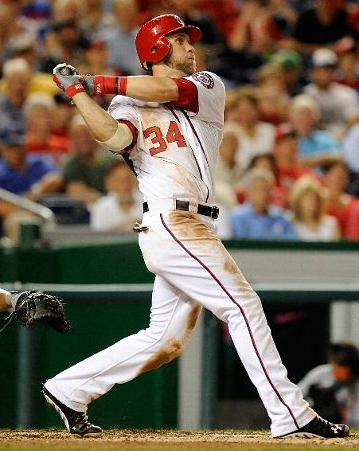 stadium up the road. I’m good with Nationals Park at Harper Stadium. Or how about the Harper Dome? It’s got a nice ring to it… what do you mean there’s no roof? Hey whatever, it’s better than the inevitable Geico Stadium or PNC Park 2, isn’t it?

As ridiculous as it may sound, this wouldn’t be unprecedented. And Harper is way better than Napoleon Lajoie.

I don’t know, it’s Washington. Have you seen the people that are running for President these days? There’s gotta be some position to give Bryce. I’m cool with dictator perpetuo, but then he might not start showing up for spring training til March 16.

The Nats have a chance to sign Bryce, but it may take more than money. Bryce suggested to not put limits on players, so the Nats should take him at his word. Offer him more than money, and maybe he’ll be intrigued. You got any better ideas?