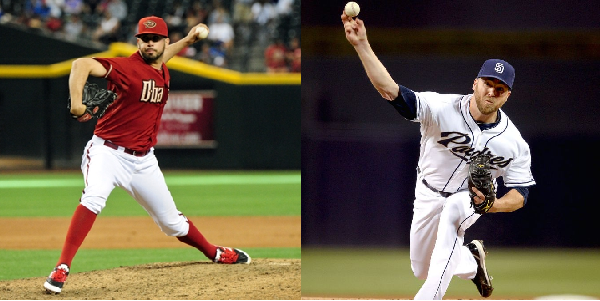 edit: After I wrote this post, the Nats also signed Yusmeiro Petit. It made sense to just add a little about him in here, so I did that, without changing the rest of the article. Therefore, it’s more of a few jammed in paragraphs than a seamless fit… apologies in advance.

The Nats went into the Winter Meetings with everyone knowing that they want to rebuild their bullpen. There are a few names that we all expect to stay on board (Felipe Rivero comes to mind), a few that have been released but could be resigned (Carpenter, Stammen), some who have promise but haven’t been consistent (Barrett, Treinen) and a couple of closers who will probably not be around next season (Papelbon, Storen).

They’ve already missed out on a few big name closers in the trade market, although some recent news suggests that at least for one, that may not have been a bad thing. But if Rizzo doesn’t seem concerned enough with getting a closer, it’s worth noting that it’s not his only bullpen concern. He’s acknowledging the need for some additional help, and over the last week he signed two free agents who should do just that.

On Wednesday, the Nats reached an agreement with free agent reliever Shawn Kelley. The details of the contract haven’t been revealed yet, so I won’t go into whether it was a good value, for obvious reasons. But Kelley as a pitcher has a pretty good track record.

Kelley, soon to be 32, played for the Padres last season, and was great in that pitcher’s park. He’s a two-pitch guy, and actually threw his slider more than his fastball in 2015, at about 55% of the time. His fastball is in the 92-93 range, so the velocity is nothing special, but he does get some swings and misses on it (not a ton though).

His slider, on the other hand, is his wipeout pitch – he had a miss rate of 40% per swing on it, and an overall whiff rate of 20% on it. Hitters swing at it just over half the time, and when they do, they miss 2/5 of the time.

Before that, he spent two seasons with the Yankees and wasn’t nearly as good, compiling a 4.46 ERA. The swing-and-miss results weren’t very different there, and he did strike out 138 in 105 IPs. His walk total of 43 wasn’t terrible, especially with that 11.9 K/9. In New York, he wasn’t as good against lefties or righties, but the OBP against lefties jumped over .300. That suggests he might be used sparingly in tight situations against LHHs.

Prior to NY, he spent 4 seasons in Seattle (one of them mostly injured) with a 3.52 ERA (115 ERA+) although his strikeout rates never hit the double digits that he has seen since.

Kelley is a big addition, and should add a solid if not spectacular right-handed arm to the bullpen. And if what he did in San Diego is a sign of what he can do outside of Yankee Stadium, or in the NL, then he’s a legitimate setup man candidate.

Rizzo didn’t wait until the Winter Meetings to get going, as late last week, the Nats signed Oliver Perez, a lefty bullpen arm. Perez has been around a while – if you don’t know him as the reliever, you might remember him as a failed starter. You might also remember him from his tenure with the Harrisburg Senators.

The Mets released him after one more horrible season, in early 2011, and the Nats signed him to a minor league deal. He pitched well for Harrisburg, but not good enough to convince them to keep him or bring him up. In 2012 the Mariners signed him, converted him to a reliever, and his fastball velocity and his strikeouts went up while his walks went down.

He’s been better against lefties, not surprisingly, and although he was good against them in 2014, they beat him up bad in 2015. But he still got lefties out, at least until he was traded to the Astros mid-season when he didn’t get anyone out (9 ER in 12 IP). Over the last three years, though, his ERA has been 3.54, and his K/9 has been 11.8. He has dramatically reduced his walk rate, down to 3.8 from up over 5.0 most seasons as a starter.

As for his pitches, he throws his slider a bunch against lefties – somewhere just above or below the 50% mark the last 3 seasons. He uses his 4-seam fastball more against righties. He also mixes in a sinker against both. His slider is dominant against lefties – he gets them to swing and miss more than Kelley does against righties with his slider. And righties didn’t fare too well against it up until last season.

His sinker is a really good pitch, it generates a ton of groundballs, and you may see him moving to that more against righties, especially if his slider isn’t effective against them.

The Nats will probably use him more of a lefty specialist, as they will probably look to get Rivero more involved as a the late innings go-to guy. But he’s been good enough against righties in the past, that if 2015 was the anomaly, you may see him quite a bit in the middle against anyone they send up. It’s a two year deal, at $7M total, so it’s not too much off the books and is manageable if he implodes – great if he can be used consistently against righties.

As I mentioned earlier, after I wrote this initially, the Nats also signed ex-Giants pitcher Yusmeiro Petit. Petit is not a strikeout artist like the other guys. He has also been a starter for about 1/3 of his appearances. He had a much better ERA as a reliever (3.92) than as a starter (4.96), and those numbers have been amplified the last two seasons. In 2014 he posted a 1.84 ERA in relief, in 2015 it was a more reasonable 3.47.

So, why do the righties have such trouble with him while the lefties don’t? It’s the delivery – he throws a ball that righties have trouble picking up. Or… an INVISI-BALL

Eno Sarris goes quite in depth on Fangraphs on Petit’s delivery (with some really great pics to help show just whats going on), that is definitely worth reading. Basically, Sarris reveals that hitters see the ball out the beginning of Petit’s delivery, then he blocks it with his own arm, then the ball appears again. That’s not an easy thing for hitters.

That means his value is somewhat limited – it’s probably unrealistic to think he’ll start being much more effective against lefties. But, if used mostly against righties (and thanks to the addition of Perez they have more flexibility to do this), Petit won’t strike out a ton of guys, but those guys aren’t going to be getting many hits, either.

Bullpen: Bolstered but not Complete

As for the Kelley and Perez, in case you hadn’t figured it out, you can expect some strikeouts.

Either way, both should be welcome additions to this beleaguered bullpen. Kelley could be used late, Perez probably could in matchup situations. It’s likely that neither were signed to finish games, neither guys are spectacular, but both are solid bullpen arms.

These signings are a tacit acknowledgement from Rizzo that he has learned from some of the mistakes of last offseason, relying too much on young relievers that he thought were good enough but hadn’t really shown it. It also bolsters the weakest part of the roster, and that’s great to see.