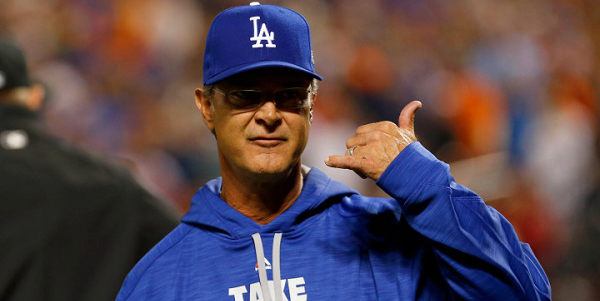 As the Nationals search for the new manager, another possibility has opened up, beyond some of the guys I’ve already mentioned. I am referring to, of course, Don Mattingly. So, does he make sense for the Nats?

If you had asked me this question a couple of years ago, I would have given an unequivocal “no.” He didn’t look like much of a success as a big league manager, but, a few years later, his reputation has changed a bit.

First, he led a pretty unimpressive team to a winning record before the front office decided to break the bank. Three division titles in a row later, and not only did he accomplish something that had never been done in Dodgers history, his reputation has been somewhat redeemed. He’s also, with the arrival of Andrew Friedman, embraced the new analytics that makes so many managers roll their eyes.

Still, he is no slam dunk. Three division titles were followed by one NLDS win, and nothing else, so you’d forgive Nats fans for being skeptical that he could bring them as far as they like. Also, a few internal conflicts were made public, so you might think he’s not good at holding a team together.

Before we go on, though, in the spirit of full disclosure, I probably should mention that Don Mattingly was my favorite player growing up. I can’t even think of someone else I liked nearly as much as a kid, maybe Rickey, but really, I don’t think he was that close. So I am coming at this from a strange place – I idolized the guy, but if he comes to DC I might be more terrified than excited.

I wanted to mention him as a player because he also goes against my philosophy that great players make bad managers. With Mattingly, I don’t worry about that, because he’s already shown he’s at least a capable manager.

Maybe it was going from MVP to struggling former star with constant back issues. Maybe it was the long wait to make the playoffs, on a team that was supposed to be there every year. Or, maybe it was his personal success, despite the back pain, in his one postseason (he hit .417 in the ALDS and I didn’t have to look that up), that makes him able to relate to most players.

Whatever it is, the fact that he was essentially a Top 5 player in baseball over a half a decade and still has been a successful manager is doubly impressive to me. Regardless, if you want to watch a stadium go crazy, watch a guy who spent a decade as a fanbase’s favorite player finally hit a home run in his first postseason.

But, enough about his playing career, let’s get back to him as a manager. There are plenty who have paid more attention to his tenure in LA than me, so let’s see what they think.

The first Twitter person I asked was Baseball Prospectus author, DC resident, and Dodgers fan, Craig Goldstein. As a Dodgers fan, I thought he would have a pretty negative view of Mattingly, thanks to the lack of playoff success. But it was not the case. He said that he liked Mattingly, but couldn’t be sure if the Nats should hire him, due to fit.

@nationalsreview I'd say he's got a lot of experience dealing with difficult clubhouses, but managing is hard to figure in terms of fit

Fit aside, after reading a few other comments, I realized that the reputation Mattingly had earned early on as a manager might have been a bit unfair. In fact, a mark of his tenure with the Dodgers seems to include improvement, something that is important to see in a young manager. Learning on the job isn’t necessarily what the Dodgers wanted, but it beats the hell out of not learning on the job, which is what the Nats got with Matt Williams.

Craig actually went on to write a Baseball Prospectus article about Mattingly’s time in LA. It’s worth a look, but here are a few quotes that I found interesting:

“Mattingly’s in-game decisions tend to leave something to be desired, but that’s something that can be said of 25 or so managers. His real work was done in the clubhouse and is probably undersold in that regard. While a number of stories and heated exchanges leaked out during his tenure, it’s not difficult to imagine the number of crises he averted.”

“Whether it’s likely that the person replacing him [as the Dodgers manager] will be an improvement…. that’s another question altogether and one I’m not particularly optimistic about.”

So, at least one Craig thinks he was a strong manager, if not quite Bruce Bochy. But what about other Craigs? Oh, here’s one

I feel like Mattingly will follow Torre in every respect in his career. Including suddenly becoming a genius once he's in a good situation.

This is some serious praise, it also reminded me that before Joe Torre (Mattingly’s managerial mentor) had four World Series rings, he had a pretty poor record after nearly two decades of managing the Mets, Cardinals and Braves. In an interesting coincidence, Torre is also the only modern, truly successful, manager that I can think of who also won an MVP award as a player.

While these guys are a nice representation of the intersection of the Venn Diagram where “professional baseball writers” is one circle and “Craig” is another, there are others with opinions about him as well. I asked Jay Jaffe of Sports Illustrated (and Dodgers supporter) about fit, and he was kind enough to answer:

@nationalsreview yeah, i think he'd be fine there. I'd hate to see him fall into the Marlinator, literally or figuratively

Which isn’t exactly saying he’d be the next great manager there, just that it seems to work in terms of fit. I wasn’t able to see too many comments from the Dodgers themselves, barring one…

You want effusive praise? Dodgers catcher A.J. Ellis has it for you.

Go ahead and check out the whole quote if you’d like, because it was more of the same. Now, in DC, Bryce Harper talked about how much he respected and appreciated Matt Williams, so there has to be some skepticism with any quote like this.

Will he become the genius that Calcaterra predicted? Or the World Champion that Ellis doesn’t doubt? That, I don’t know, but I can compare him to the other managers they are considering.

As far as the guys without experience, and you can name anyone from Giants’ assistant Ron Wotus to Cal Ripken, we just don’t know. Those guys could end up as in over their heads as Matt Williams, or as great as Casey Stengel. But after the last two years, I’d take an experienced guy who has shown he’s not terrible over the wild card candidate right now.

In terms of the guys with experience, I’d rank Mattingly over almost all of them. Gardenhire did succeed early on, but had a pretty poor tenure at the end. Bud Black is very well respected but he never once led a team to the playoffs, albeit with poor lineups all the time. Both are acceptable choices that probably won’t completely crap the bed, but Mattingly seems to be at least the same thing, except he’s younger, has shown an ability to improve, and an understanding of advanced statistics.

One guy who doesn’t fit this mold, has experience, and is in conversations with the Nats is Dusty Baker. Baker has become synonymous with “old school” manager in the sabermetric world, and it’s not a complement. He has a reputation for destroying arms, and, like  Mattingly and Gardenhire, for playoff failure.

The case for Baker, though, hangs on how well his teams tend to perform in the regular season. He has a genuine ability to endear himself to the clubhouse. There’s a great article by Emma Span examining why his failures at decision-making outweigh his abilities in the clubhouse. But, if you want a manager who is a leader for leaders sake, and think a team running on all cylinders will outplay his questionable decisions, Baker could be your guy.

So, what to make of Mattingly? Buster Olney made the interesting point that the Dodgers front office was very involved with the day-to-day, and it probably wore Mattingly out in the end. Keith Law, in a chat, compared Washington to LA as a place to go as a manager, “If you want more autonomy.”

So if it does come down to fit, there seems to be some alignment there, at least from Mattingly’s perspective. As for the Nats perspective, it seems to make sense (again, just in terms of fit) as well. Olney also notes that “he was well-liked by Dodgers players for his steady nature”, something that opposes the descriptions of Matt Williams.

Mattingly was such a good defender that, if he was a righty, he would have played third base. But the gold glove 1B didn’t just play on the opposite side of the diamond as Matt Williams, he appears to have the opposite personality. Two perfect words that Adam Kilgore used to describe Williams personality as a manager were “inflexibility and nervousness.” Mattingly, on the other hand, is seen as flexible, willing to learn, and pretty unflappable and cool, by his players.

That says nothing, though, of his ability to manage a team. The Nats should certainly talk to him and see what they think – he’s been good enough, and fits in with their plans well enough, that a conversation is warranted. Beyond that, I can’t say.

If Mattingly comes here, and fails, it would be tough for the Nats fanbase. For me, it would be doubly disappointing, to see a childhood hero manage my favorite team and watch them both lose.

On the other hand, one more thing that A.J. Ellis said probably sums the other of the spectrum for me if Mattingly ended up the Nats manager: “rarely does a player you grew up idolizing come close to even meeting your expectations. To say Donnie exceeded mine is an understatement.”