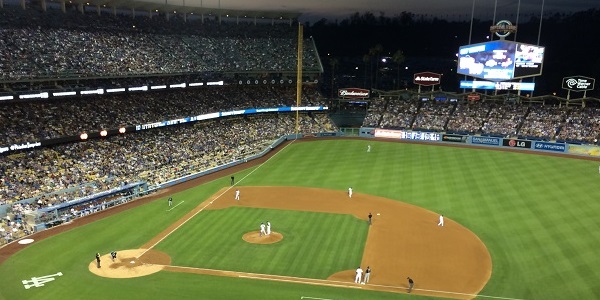 A business trip brought me out to LA this week, and while the trip was very short, I did have a free evening and the Dodgers were in town. So I left my company’s office in Redondo Beach, a mere 28 minutes away, and set out to Dodger Stadium at about 6:15 pm. Was it realistic to think I could get to the game before it ended? Before I went to California, I asked the only man on twitter I know who lives in LA who might actually answer me: A’s ESPN SweetSpot blogger Jason Wojciechowski.

@nationalsreview not a clue, unfortunately. That's not a direction I'm ever traveling

Ok, that’s motivation enough (he didn’t say not to do it). Traffic in LA is notoriously bad, and coming from DC, I should know that it wasn’t realistic to think I’d get there by first pitch. I thought I might get to the ticket booth by about 7:15.

At 6:45 I was sitting on the 110 (I sound soooo Californian) only a couple of miles from the stadium, with a ways to go. After following the cars off the freeway, we all turned towards the field and in to the general parking line. After following the cars around the entire stadium, I finally did park, right around 7:45. I’d say at least 30 minutes were spent between the exit to stadium drive and the actual spot. It probably would have helped to show up on time.

My original plan was to buy tickets at the window, but when I realized I’d be there more than 30 minutes after first pitch, I had visions of walking up to a closed window. I checked online but the Dodgers site was no longer selling tickets to that days game. And while I am a huge fan of stubhub, I’ve never bought tickets after game time, and I was worried something would get messed up. So I sweated, I waited and I finally parked.

Walking up to Dodger Stadium is a bit of a throwback. It very much has a look of late-50s/early-60s to me with that building and the block letters on it. It reminded me a bit of walking up to Shea Stadium, and when I checked, I wasn’t surprised to find they broke ground on the two places only two years apart. 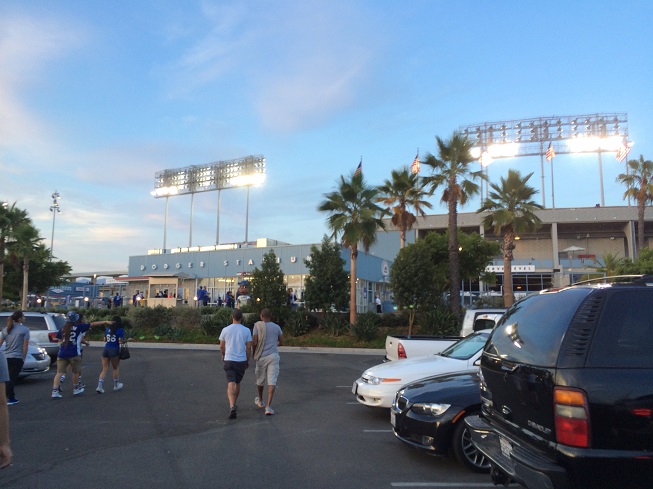 Getting up to the ticket window I was pleasantly surprised to see a very short line. Normally it’s nice to see a line that’s short, I was just relieved to see a line at all, meaning it was open. I walked up to a window and tried to identify where a good place to sit would be. Unfortunately, it was very difficult to hear the guy in the booth trying to sell me tickets, so I just sort of picked an area that I thought might have a good view and wouldn’t be too expensive.

I ended up in the lower ring of the upper deck, near first base, row N, so not too far back. The ticket, though, was $45, and this seemed like a bit much. I did get the impression that there were multiple price points within the section, but I really didn’t take time to discuss with the quiet talking ticket salesman, I had already missed nore than an inning. That being said, the view from my seats was gorgeous. 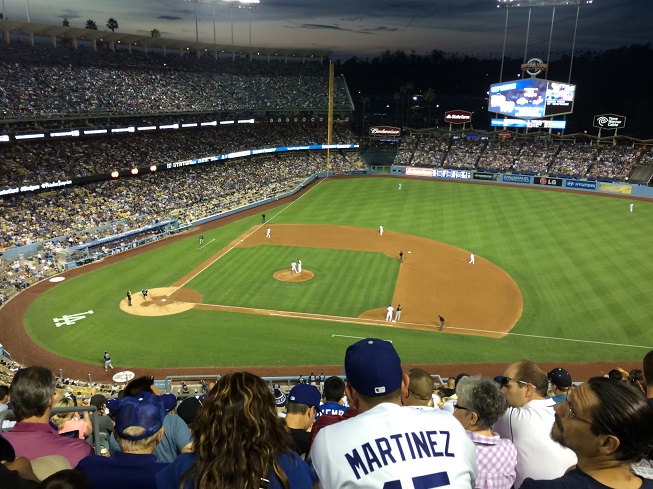 There is definitely a good feel to the stadium. Going back to where else I’ve been, it reminds me a bit of old Yankee Stadium or Wrigley Field. Not surprising, as this is the third oldest current MLB stadium.

Just like those older places, the concourse is unimpressive. The lines are long. There are no views of the field from the majority of the concourse. But when you get outside, it’s a religious experience. You are looking at a cathedral of sport. Dodger Stadium looks great from the seats, and the southern California scenery like palm trees and nearby mountains are beautiful.

Before I sat down, though, I went to get a Dodger Dog and a beer. I had to walk from the entrance in the Upper Deck by the LF foul pole all the way around to near the 1B bag, so I figured I’d pick up a nice unique local beer on my way. I was stymied in my efforts by what appears to be a complete lack of such things. Perhaps someone needs to create a beer map for Dodger Stadium. Perhaps someone needs to pay me 6 figures to do this for every park in every major sport. Cause I’d do it.

Anyway, I couldn’t find any craft beers, their high end beers were decidedly boring (although some were good, but nothing exciting), so I just decided to grab whatever the food vendor had. Shock Top was on tap, after buying one of those and a Dodger Dog and I was on my way to my seat. The Dodger Dog was good, I didn’t take a picture of it, but it was literally just a long hot dog sticking slightly out of a long bun. I didn’t think it was anything special, basically like eating two hot dogs in series. Two in parallel seems like it would work better. Regardless, no complaints, but nothing made me go “if only we had these!”

As for the game itself, by the time I sat down it was 2-1 Dodgers. As I walked in to the actual stadium, well before I found my seat, Matt Kemp hit a 2 run shot. I literally was walking down the steps to my seat when Freddie Freeman homered to put the Braves up 3-2. The Braves proceeded to load the bases, but Beckett was able to get out of trouble.

The next bit of action was in the 5th, where the Braves scored again, going up 4-2. Luckily the Dodgers tied it up in the bottom of the inning. The game was scoreless until the 7th, when Puig scored on a Crawford groundout. Kemp then hit his second homer, and the game was pretty much over from there.

The whole time the crowd was into it. It seemed quite crowded for a summer Tuesday night, and there was a decent Braves contingent as well. But the Dodgers fans were loud, they were into it, and they made the stadium even better. It was a notably good crowd, and I have no idea if it’s always like that, but I was impressed.

Meanwhile, I decided to explore the stadium a bit more while I was cheering against the Braves, er… for the Dodgers. As I walked around the concourse, I was once again getting that pre-Camden feeling of a closed in concourse, although in a different way. While I couldn’t see the field from most of the concourse, I could see outside the stadium. So it wasn’t as nice as some of the modern stadiums that make you feel like a part of the crowd even when you’re waiting to buy your beer, or expel it, at least you had some nice views and didn’t feel claustrophobic.

As I walked back around by home plate, there was a nice opening of the concourse and I got another good view of the field. The twin video screens are a nice touch, and the right field one shows the player stats during ABs although nothing more than the boring old triple crown stats and the like. 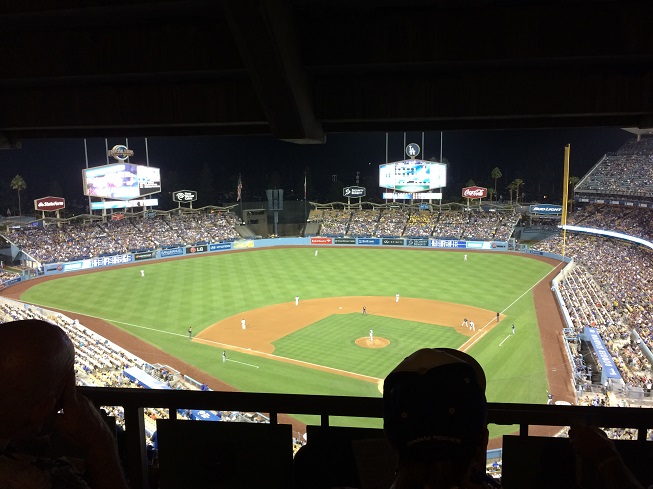 After the Dodger Dog I wasn’t particularly hungry, but I was curious as to what else I might find in Dodger Stadium. I asked my contact in LA and he once again provided me with incredibly essential information

@nationalsreview I've only been once this year. They've upgraded. Not sure what's good.

Thanks again for arming me with essential information. Hey, at least he answered… Jaffe, noted taco AND Dodger fan, was nowhere to be found. There wasn’t too much of a selection other than your typical stadium dogs and burgers, except I noticed a line at the LA Taqueria. I figured, how could I lose? I got on line and as I was debating between the street style carne asade tacos and a chicken tostado, I noticed people walking out with nacho helmets. Hmmm, perhaps this wasn’t the artisanal fare I had hoped for when entering the line. I ended up going with the carne asada tacos. 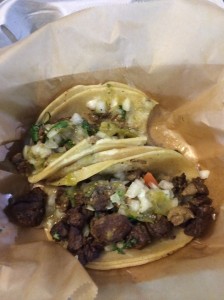 So, let’s start with this. It looked good, but it was not freshly made, and I could tell. The meat was fine but was not anything special. The green chile sauce, onions and cilantro on top were actually quite good, as were the corn tortillas. But the meat was overly salted and it just seemed to have been sitting for a while. Compared to El Verano Taqueria in Nats Park, it’s just not as good. Conceptually the LA Taqueria tacos could have been better, but the freshness of the ones in Nats Parks just trumps them. And yeah, I know the meat is pre-cooked there, too, but the on demand assembly definitely makes a difference.

After looking at some blogs about what I SHOULD have been eating, I’m really not sure I was missing much. Other than the modified Dodger Dogs, like the one slathered in chili and jalepenos, or the bacon wrapped “extreme” dog. I am quite frankly a little disappointed – stadiums should reflect some local cuisine in a positive way. In LA, you’d expect quality tacos, not something you could beat in DC.

Besides the parking, the food, and the difficulty in finding craft brew, though, I loved Dodger Stadium. It was a spectacular crowd and atmosphere for a game, and the field looked gorgeous. I had a great time, and before I took off, I had to check out the team store. Nothing spectacular there, not that it was bad, just pretty standard stuff. I was debating getting a Puig shirsey, but I thought I might never wear it… although another one did catch my eye 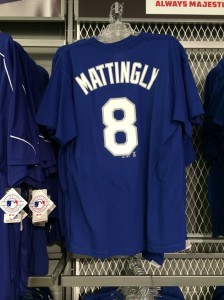 But no, childhood hero or not, I just couldn’t see myself wearing another NL team’s shirsey around. So I went away emptyhanded. Except, of course, for the spectacular giveaway! 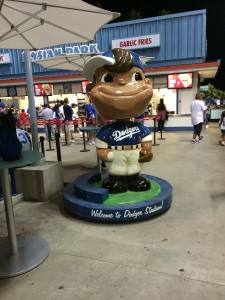 Just kidding, they didn’t give away Bob’s Big Boy life sized bobblehead in a Dodgers jersey.