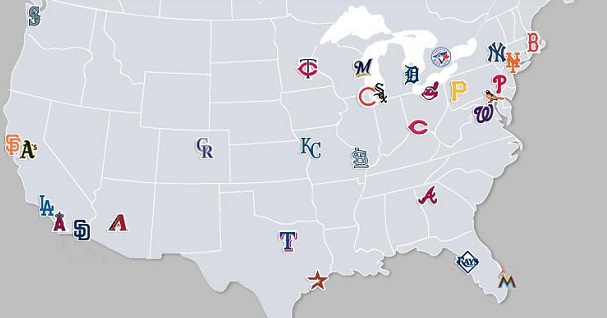 A guest post today! My brother Jonathan decided to take a look at the different divisions, with the thought that maybe what we think of as the bad ones aren’t so bad. Here’s what he found (take it away, Jon):

As we sit here two-thirds of the way through the 2014 MLB season, most baseball fans would probably agree that the AL West is the best division, the NL Central is having a nice showing, the NL East and West are shaping up to have exciting races between the top two teams while leaving the rest of the division in the dust, and the AL Central is, and only is about the Tigers. Also….the AL East is terrible. But why do we think that about the east? It’s probably because Boston has packed it in for the season, the Yankees are struggling to keep up with Toronto and Baltimore, and Tampa, the popular pick to win the division is stuck in fourth place.

At this point of the season we no longer have to worry about the small sample size season statistics can show early on, so I thought I would investigate just how bad the AL East really is, as well as how the other division size-up by looking at the combined record of each of the five teams in a division, versus the rest of the league; i.e., the record of the AL East versus the rest of baseball. The results were surprising, and is why this article exists. All records are through games on Sunday July 27th.

Two things jump out immediately, first, that the AL East has the best record against the five other baseball divisions, and second, that the NL West is really, really bad. Does the AL East have the best teams in baseball? Of course not. It would be hard to argue against the Athletics and Angels, but top to bottom, the AL East is stronger than we all might think.

Take Boston for example. They are nine games below .500 on the season (48-57), yet they are playing .500 baseball (30-30) against opponents outside of the AL East. Boston hasn’t looked formidable since mid-May, but it’s their own division that is killing them.

The NL West is truly terrible, especially in-light of their .459 win percentage against other divisions, but the Dodgers are a good team, right? Kershaw, Greinke, Beckett, Ryu, no wonder they have the best record (59-47) in the National League. Wrong….they are feasting on their own awful division to the tune of 14 games above .500, which means against the rest of MLB, they are two games under .500.

I was not surprised that the NL Central was second on the list as the Brewers, Cardinals, and Pirates are all having strong seasons while Cincinnati is still hovering at .500. The NL East seems about right with two stronger teams, two middling teams, and a basement dweller in the Phillies. Interestingly, while I expect the Nationals to pull away from the Braves, the Nationals owe a significant amount of their record (57-46) to their (16-9) mark vs. the West. The Braves on the other hand are two games under .500 versus the NL West, and still have all seven of their games against the Dodgers remaining.

More can certainly be gleaned from these records, but I hope the main point is that unbalanced schedules really hurt some teams (such as Boston this year), and help inflate the perception of other teams (the Dodgers). I believe this can be fixed though. What I propose is a division restructure, as well as a slight playoff change to make the teams vying for the wild card have similar schedules. This will involve expanding each league by one team, and creating two divisions, East and West. For fun, I will make two attempts at this.

With this alignment, the East divisions encompass the 14 current Eastern Time zone teams plus 2 expansion teams, while the remainder of the teams are in the West divisions. The biggest concern here is splitting up the four old NL Central franchises of PIT/CIN/STL/CHC, but this solution would probably be the most pleasing as St. Louis and Chicago are kept together, and this fits with the time zones as well. Below is my preferred realignment.

This would move Milwaukee back to the American league, Houston back to the National League, and Chicago into the AL East. This allows for both an eastern and western expansion franchise, let’s give them to two awesome cities like Portland, OR and Nashville, TN, but that is not the main point so I digress….

What the two eight team divisions can do is help to fix the gross imbalance in scheduling, plus it allows for each wild card team to go head to head with a team with an almost identical schedule. The playoffs will be as follows:

Twelve teams will make the playoffs, four division winners, and six wild card teams. Each wild card match-up will be between the second and third place team in each division, with the winner playing the first place team. From there on, the two remaining teams in each league will play for the right to go to the World Series.

Since I have expanded the league, moved teams around, and changed the playoffs, I’ll make one more move as commission and shorten the season to 160 games.

48 : 6 games (2 series) versus your eight other league opponents

In this scenario, the only scheduling imbalance against teams vying for a playoff spot are the cross-league rival (which is unavoidable), and which teams you will host, versus travel to play, for the series against teams from the other league. If we forget about the home/away imbalance for the 24 games against the opposite league division, there is at most a four game imbalance in scheduling for two teams vying for a playoff spot.

There is no perfect solution to fix division imbalance, but I believe the case has been presented that with six divisions, some teams get too easy of a ride, while other teams suffer. Despite playing in the second best division in baseball, St. Louis will not receive a wild card currently as Atlanta and San Francisco, feasting on easier division opponents, have slightly better records. This restructure, short of removing divisions from MLB altogether, will ensure that the most deserving teams have the best shot to make the playoffs.