2007 was the Nationals Moneyball year. Not because it represented a change in philosophy. Moneyball, the book, was about a new way to look at baseball, sure. But it told this through the story of the Oakland A’s figuring out what to do with their seven picks before the start of the second round.  The 2007 Nats didn’t have seven first round picks, but they did have three, and they could have laid the foundation for future success.

But it didn’t work out that way. With their first pick (pick #6) they found the most success out of their three choices, with Ross Detwiler. Detwiler has been a decent player, with a career WAR of 2.0 so far, an undefined role, and a poor 2014 season. But he appears to have some value, even if it isn’t with the Nats. While he wasn’t worth a #6 pick, he’s a MLB player, and that’s a good start. 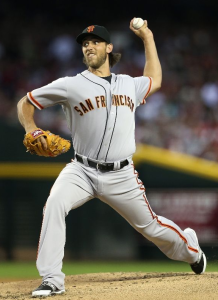 But the Nats certainly could have done better than him. Scanning the list down from the #6 pick, a few names stand out. Jarrod Parker, currently on the bench after a SECOND Tommy John surgery pitched 2 full seasons with the A’s (he was picked by Arizona #9) and amassed a 6.0 WAR in those two years. Madison Bumgarner was taken by the Giants at #10 and has been great for 5 seasons now as a starting pitcher, with a career WAR of 12.3 and a 3.06 ERA.

Quietly lurking down at pick #27 for the Tigers was Rick Porcello, and his career WAR also beats Detwiler’s, although I’d rather have Bumgarner or Heyward than him.

The next pick was Josh Smoker (#31) who is no longer with the team. He came in as a starting pitcher, and didn’t fare too well. He showed some promise in 2011, when they moved him to the bullpen – he had a 2.31 ERA and 56 K in 50 2/3 IP, but he also had 37 BB, and that was his career’s high-water mark. He’s currently pitching for the independent league Rockford Aviators.

Just three picks later, at #34, the Reds took Todd Frazier. A 2012 RoY candidate, he’s got a career WAR of 7.6 and has hit .252./.323/.453, mostly as a third baseman in Cincinnati. A couple of other strong MLB contributors such as University of Maryland product Brett Cecil (#38, Toronto) and Sean Doolittle (#41, Oakland) were available and have settled nicely into bullpen roles.

But scanning down the list shows a guy that is easily the pick they SHOULD have gone for – Josh Donaldson, who went #48 to the Cubs. He moved along with a slew of other minor leaguers to Oakland in the Rich Harden deal. It took a few years for Donaldson to develop, but over the last two years he’s been a revelation. From the start of 2013, he’s hit .294/.380/.510, playing in a bad hitter’s park, is considered a very good defensive 3B and, oh yeah, finished 4th in MVP voting last season. He’s the best position player on the best team in the AL right now, and looks to be a star in the league.

Right after the Cubs picked Donaldson, the Nats went with Michael Burgess at #49, a toolsy outfield prospect. Burgess has never been awful in the minors, other than maybe 2009, and even in 2010 when the Nats traded him he was only 21 years old and managed to hit .265/.357/.465 in high-A and AA. But since then he hasn’t been very good, and he’s now on his third organization. If you’re interested in seeing him, he’s hitting .280/.326/.457 with the Frederick Keys. He’s got a shot at the majors still, but at 25, he no longer looks like much of a prospect.

The first round pickings are pretty slim after this point. The Nats could have taken Tommy Hunter (#54, Rangers), the occasional Orioles 2014 closer, who has a career WAR of 7.0 thanks to a few decent seasons as a starter for the Rangers and Orioles (2009, 2010 and 2013). They could have also taken Corey Brown (#59, Athletics), who has made a few appearances as a Nationals outfielder and is currently struggling with AAA Pawtucket. Another option was Cory Luebke (#63, San Diego), another guy like the aforementioned Jarrod Parker that has pitched pretty well in limited time in the majors but has now recovering from his second TJ surgery.

Following Burgess, though, was an impressive list of second round guys that the Nats should have selected. Scanning the list down to pick #67 (#3 in the second round) is a starting pitcher with a 13.5 career WAR, 125 career starts with 47 Ws, and a 3.42 ERA and… oh look it’s Jordan Zimmermann. Since they were the ones that got him, we’ll move down the list.

There appears to be a guy at #76 (#12 in the second round) that may have been a better choice. Taken by the Marlins, a first baseman named Mike who you may have heard of eventually changed his position to right field and his first name to Giancarlo. Giancarlo Stanton, if you’ve never heard of him, as career WAR of 18.9 (3rd best in the first two rounds, barely behind only Heyward and #1 pick David Price) and has hit .270/.359/.543 with 133 HRs so far, and is the most powerful hitter in the game. It’s pretty clear that’s the place they should have gone, over Michael Burgess.

If you don’t like Giancarlo, they could have also taken Braves 1B Freddie Freeman (#78, Atlanta) with his 9.9 career WAR, or Red’s SS Zack Cozart (#79, Cincinnati) and would have been perfectly happy, if a little jealous of Miami with that #49 pick in the first round.

Sizing Up the Possibilities

Alright that’s taking the fantasy to a whole other level, Bumgarner isn’t such a crazy upgrade over Fister, and quite frankly Donaldson was such a late bloomer who they’d probably still have LaRoche. With the leftover Werth money maybe they’d have signed a big name CF like Jacoby Ellsbury, Michael Bourn or BJ Upton, none of whom has looked great so far sincefree agency, although Bourn looks better this year and Ellsbury is doing alright, if completely devoid of power. But, it’s fun to dream, and with what looks like 1 ok pick and 2 total misses, it could have been much better.

Not that the 2002 A’s did much better, either. While their Moneyball philosophy did lead to AL West championships, playoff appearances, and Derek Jeter flips keeping them out of bigger and better things, they only turned those 7 picks into 2 good players – Nick Swisher and Joe Blanton. So the draft is certainly a tough thing to criticize a team about. But still… just think of how it could have been for the Nats.