The Nats have a plan. A plan to take over the World (Series). And that plan now includes moving Ryan Zimmerman to the outfield and first base, at least part of the time.

#nats plan is for ryan zimmerman to become that rare everyday star to rotate positions (3B, 1B, LF) http://t.co/29CJOXU1c6

I expect he’d play third base the most, and when there is a tough LHP, he’d spell Adam LaRoche at 1B. Left field might only be for those days when his arthritic shoulder is barking but LaRoche is playing. But I could be wrong… until Bryce Harper gets back maybe he’ll see more LF than that.

What he’s doing isn’t unprecedented. There are certainly other examples of star players moving from the infield to another position or to the outfield, although moving around significantly after a move are less common. Here are few stud infielders that moved later in their careers.

Robinson is probably the best example of an all-time great that dabbled in being the super-utility type player. He came up at age 28 after serving in World War II and then playing one season in the Negro Leagues and another in AAA. He was a 1B that whole year, and was an established star immediately, winning RoY and finishing 5th in the MVP voting. The next season, 1948, he moved around a bit, starting 114 games at 2B, 22 at 1B and 5 at 3B. The next few years saw him playing only 2B. 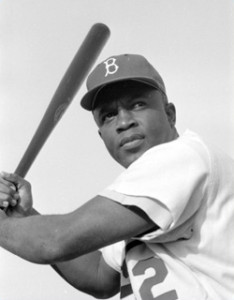 He was a spectacular hitter for almost all of his relatively brief major league career. His bat fadeed quickly, though, and his power was all gone in 1955, when he was 36. One season later he retired. You’ll probably notice a trend among the guys on this list, that most of them didn’t play back and forth between positions WITHIN a season. But Jackie did it, and he was a great hitter for most of that time.

Mr Cub came up as a SS and played there for almost all of 8 seasons, from 1954-1960, plus his short debut in 1953. The only exception was in 1957, when he spent about 1/3 of the season at 3B. Despite being an above average shortstop and playing most of the time in those seasons (he had a two several-season consecutive game streaks), minor injuries were starting to take their toll.

Rose played all over the place depending on the season, but like the other guys, he had only a few seasons where he played significant time at multiple positions. His first four years he played 2B, but then was moved to the OF. His first year in the OF, 1967, did see over 30 games at 2B, but that was it for a decade.

Carew spent almost all of his first nine seasons at second base, where he won a Rookie of the Year award, had 5 top ten MVP finishes, led the league in AVG 5 times and hits and OBP twice each, before moving to first base. The transition was made by Twins manager Gene Mauch in an effort to lengthen Carew’s career, although he wasn’t considered a great second baseman and that may have played a part in the move. But he was great at 1B as well for the final nine seasons of his career. As a 1B, he also led the league in AVG and OBP 2 times, as well as once in hits, runs, and OPS, and he won an MVP. He amassed a .328/.408/.429 line after the transition and cemented his Hall of Fame career. 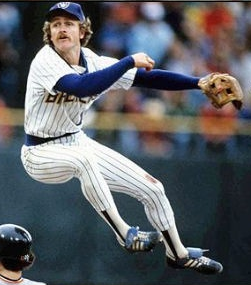 He made a clean break from SS, playing all of his games there or at DH in 1984, and then never playing there again afterwards. He retired in 1993 with 3,142 hits, 1479 games at SS and 1218 in the OF. He had 5 great seasons as a SS, before having another 5 great ones in center. His final days were better for him as a hitter, but relative to his position and the time, he was better before he became one of the best shortstops in the game than after he stopped being one of the best outfielders.

Biggio is an interesting case because of just how many positions he played. He started out as a catcher, and in his first 4 seasons he spent most of his time there, with 50 games in the outfield thrown in to his third season. Then he transitioned to being a full time second baseman, and only started 4 games anywhere else in the field, as an outfielder, for 11 seasons. He transitioned to two seasons as a CF and LF, before finishing up his career BACK at second base.

He doesn’t quite fit the pattern as the other guys because his time at 2B dominated the other positions, but his transition to catcher is unique, and he did spend two full late-career seasons in the outfield. He had an All Star appearance as a catcher, but his great hitting almost all came as a 2B, the move to the OF occurred at age 38. 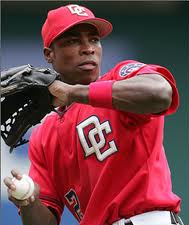 The man who still has the best offensive season in Nats history was moved to LF when he joined the team, but before that he was a second baseman, at least in theory. In practice, he was a displaced 3B or outfielder. His defensive numbers at 2B were pretty awful, with a ton of errors, low range numbers, negative UZR… the total package. But he also won 3 silver slugger awards there, and was resistant to the move.

He was great after the Nats moved him to LF, recording a 40-40 season, career highs in HRs, OBP, SLG, OPS, OPS+ and landing a $136 MM contract from the Cubs. Soriano was very good with the Cubs most of the time, in his first 6 seasons there he hit .265/.320/.499 there with 164 HRs, just under 30 a year. He was traded to the Yankees the next year after a sub-.300 OBP performance where he started strong last year and early this season, but has regressed quite a bit recently.

He resisted moving from 2B, and it’s hard to blame him. If he had stayed there for 5 more years, even with the poor defensive numbers, he might be one of the greatest hitting 2Bs of all time. As it is, he’ll have a case for the Hall of Fame, he’s got a career 112 OPS+, 2,000 hits, 288 SBs, and his 417 HRs puts him behind only ARod, Pujols, Dunn, Ortiz, Giambi and Konerko among “active” players, to use that term loosely. But despite a few highlights, like 2002 and 2006, he doesn’t have enough great seasons, and he doesn’t look like he’ll product long enough to compile the numbers that would get him in. Although as a 450-300 guy, he’d have an argument.

Today’s super utility-guy, Zorilla has a reputation of being underappreciated – to the point that you wonder if he’s overrated. But he’s got some pretty impressive numbers when you look at it. Since becoming a full timer in 2009 at age 28, he’s hit .269/.365/.441. It’s a good amount of power and serious on basemanship. He’s done this while splitting his time between second base and right field – more of the former than the latter. That ability to play the middle infield is where much of his value comes from. All 5 of those seasons have been over 4.5 WAR, including two over 8, and he has two all star appearances.

There’s little doubt that Zim doesn’t have a whole lot of time left at third base. His own words, in Tom Boswell’s column on the move, were pretty telling

The last two years have been rough for me [at third base]. I’ve had to do an excess of work to be able to do what I used to do naturally…People keep asking me if six weeks off will help my [surgically repaired] shoulder. Six weeks off? Go six years back, maybe. It’s tough. It’s bone and joint

Interestingly enough, though, he also said that “Down the road, left field is probably better than first base for me.” Left field is nice for the time being, but what happens when Bryce comes back? It’s crowded out there. But Jayson Werth‘s range has diminished, so it’s possible that if LaRoche departs after this season, he’ll move to first, Zim will go to LF and Harper will take RF. That’s something that won’t happen this year, though.

As for 2013, one thing that’s important to note is that, with the exception of Jackie Robinson and Zobrist, nobody really played multiple positions for multiple years. Some of this is because the move was done as a transition move and once the transition was made, it was done. The other reason is that if you are moving a guy around, you’re gonna have to be moving other guys in and out of the lineup. That isn’t always feasible, and roster construction in the offseason is usually done to avoid things like this.

If Zim moves around a bunch in 2014, there’s a decent chance it’s the only time we see it with him, at least for quite a few seasons. The more likely scenario is that, after this year, he’ll find a home somewhere besides third base.