It looks like Ryan Zimmerman will have some time to rest his arthritic shoulder, as he broke his thumb sliding in to second base which is why YOU SHOULD NEVER SLIDE HEAD FIRST INTO ANY… oh never mind, these guys will just keep doing it until someone gets decapitated. Meanwhile, Denard Span ran into Dan Uggla on Friday night, suffering a concussion and giving Uggla his most effective defensive play of the season. 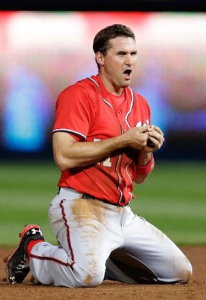 The Nats will have to compensate for the loss of a middle of the lineup bat by shuffling the infield a bit. And the outfield will most certainly suffer defensively, although the loss of Span will hopefully be a very short term thing.

The most likely scenario for the infield is the obvious one – Anthony Rendon will move to third base and Danny Espinosa will play second. This will likely be the standard lineup for the next few weeks, as long as Espinosa can hit. Thankfully, he has done just that so far with a cool .318/.375/.455 line in 24 PAs, which is about half as many plate appearances as he’d have if he was starting this whole time. In that very brief time he’s faced just about the same amount of LHPs as RHPs, he’s looking better from the left side right now. That’s good news, because he has struggled more from that side in the past.

The backup situation has changed a bit, though. Coming in to the season, it was assume that Espi would fill in for Ian Desmond, at least occasionally, to keep him fresh. It’s early in the season, and assuming he stays healthy Desi will probably sit a bit less than he might have if not for the Zim injury. But if he does need a day off, it’s likely now that Espi will stay at second and Zach Walters, who has played over 80% of his minor league games at SS, will fill in at short. Of course Walters future appears to be as a 3B, so perhaps he will get some time there instead, and Espi will indeed play SS.

Walters is an intriguing talent because his atrocious on base percentage of .286 last year in AAA is as eye popping as his 29 HRs. While he likely can’t be relied upon to deliver any sort of consistent offensive threat, the possibility of taking a few deep is certainly out there.

Obviously, there will be no Zim to first, and against a tough lefty, Kevin Frandsen is almost definitely the one who might start in place of LaRoche. Frandsen is certainly hot to start the season, he’s 7 for 15 with an OBP over .500.

Denard Span was feeling better on Sunday, according to reports…

…but he’s still on the 7 day DL. While this is good for him, and helps ensure he won’t be rushed back in a little too early, the Nats are without him until the end of the week. While Bryce Harper or even Jayson Werth are probably the next best outfielders left on the team, I don’t expect either of them to play out in center.

Werth tweaked his groin on Saturday and was removed from the game, he did play Sunday but I’m sure they don’t want to risk him more. And Harper is just Harper, I am sure they assume if he plays CF he will run through a wall, so he’ll probably stay in left as much as they can. If Werth needs some extra time, they may move Harper to RF for a bit, at least that would make sense.

Meanwhile, the obvious fill-in at CF is Nate McLouth. McLouth is fast, so although he’s not a great fielder, he should be good enough to hold down the fort for a few days. He’s not much of a hitter at all against LHPs, so if he’s forced to play against them, hopefully he’ll at least be shoved down to the 8th spot.

Of course, on Sunday, McLouth was hurt, so they did put Harper in CF, but I’m sure they weren’t thrilled about it. So if McLouth stays out for any more than a couple of days, my guess is rather than going with Harper, they’ll call up Eury Perez or Michael Taylor to play the majority of CF.

The Nats also called up Steven Souza, a big left fielder who had a great spring training. He is 25 this season, and demolished AAA pitching in 2013, hitting .300/.396/.557 with 15 HRs in a somewhat injury shortened season. He wasn’t on many of the prospect lists because he has so many questions about health and makeup, but if he can keep it together he could be a solid player, so it will be interesting to see how he does. Scott Hairston is currently on the DL, but when he comes off in another week, it is not unlikely that Souza will be sent back down to the minors. Unless he gets sent down first when Span comes back.

One more player figures to factor in to the team this week especially, and that’s Tyler Moore. Moore is in a similar boat to Souza in that either Hairston or Span could send him back to AAA. The difference is that Moore can play some first base in addition to left field, and that Moore has hit in the majors. Unfortunately, he didn’t do that last year, it was two years ago. But they know what kind of power he can channel, so there is a good enough chance that if they need someone in LF, or as a pinch hitter for either a pitcher or for LaRoche late in a game against a tough lefty (assuming Frandsen has already been used up that game).

The Nats certainly have options, and they won’t be running out the Jeff Kobernus’ of last season on a daily. The bench is stronger, and they should be able to weather the injury storms much better in 2014 than they did in 2013. That being said, they will miss Zim, so hopefully he can come back soon, ready to hit, and ready to throw.