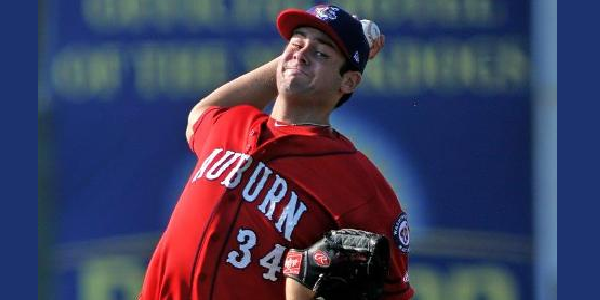 Jason Parks of Baseball Prospectus finally came out with his Washington Nationals Top 10 Prospects list, and while there are some familiar names on there, it has a few surprises as well. Here’s the list, which you can see whether or not you have a subscription.

Obviously I can’t give you every last detail on each guy, because you should buy a Baseball Prospectus subscription. But here are some things that I found interesting.

The word “elite” comes up 6 times in the Giolito writeup. Parks grades two of his pitches, the fastball and the curve as potential 80s, and his changeup as a potential 70. I’ve seen writeups that doubt his changeup but Parks thinks it will become a “monster pitch” I will quote from his “year ahead” because it’s so damn exciting:

On paper, Giolito has the highest ceiling of any arm in the minors… It’s an almost irresponsible combination of size and stuff, a 6’6’’ power righty who can sit in the mid-upper-90s with a lively fastball and back it up with an unhittable hard curveball that can show intense vertical depth… This is what it looks like, folks. This is a future no. 1 starter at the major-league level.

As far as the #2 guy is concerned, he doesn’t seem nearly as high on him. He only gives Cole a ceiling as a #3 starter, with a more realistic role as a #4. Still, that wouldn’t be bad to have come up, and he notes that the double-trading usually helps downgrade scouting reports. Development of his secondary pitches is what Cole really needs to succeed in the future. 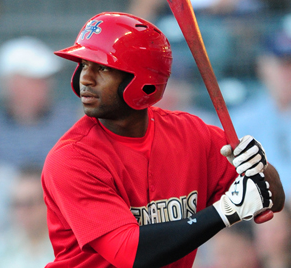 Brian Goodwin scores well on Parks list, praising his athleticism and tools even though he really hasn’t put it all together yet. He gives him a projection as a major leaguer either way, but sees the potential for a legit starter on a good team.

Parks’ likes the potential of the converted SS, Jefry Rodriguez, now learning how to pitch. Projecting him with a ceiling of a #2 or 3 starter, or a setup man, he notes that he has a ” fastball that already works comfortably in the 92-95 range, Rodriguez could really step forward as he adds strength and experience.” For a guy who has been relatively unheralded so far, Parks’ writeup definitely makes me want to keep an eye on this guy as he moves into low-A from rookie ball.

Drew Vettleson may ring a bell even if you don’t follow prospects too much, because they just picked him up in the Lobaton deal. Also considered by Keith Law to be the better of the two prospects they received, it’s pretty interesting to see they got a guy who is good enough to go on their top 10 list. He’s a lefty who can hit righties well, with a great arm, and good raw power. If things change, Parks could see the power becoming more of a factor, but at this point he seems to be a guy with a bunch of tools but nothing outstanding. This year will be big for Vettletson’s development according to Parks

Double-A pitching will present a challenge for the 22-year-old, and his production at that level will elevate Vettleson up this list or push him off completely. Despite a clear major-league projection and good overall feel for the game, the margin of error is small because the bat isn’t likely to put him in the middle of a major-league lineup

He looks like a guy who could be a corner outfielder if everything goes right, but more likely to be a solid 4th outfielder that you would feel comfortable with using in longer stretches if injuries occur.

Parks noted a few rising prospects, including Felipe Rivero, the other minor leaguer acquired in the Lobaton deal. He was a former Rays top prospect, but command issues in 2014 dropped him down. He has “an easy cheese mid-90s fastball that can just explode on hitters” so if he does improve that command, he could become quite interesting.

Another rising star mentioned is Osvaldo Abreu, a 19 year old shortstop prospect who fields well enough to stay in the position and isn’t such a slouch with the bat. He’s so young, and he’s more of a prospect for the defense, but “if the bat can continue to take steps forward in 2014, he should jump into the conversation for top 10 prospects in the system. Legit upside.”

He also notes the other guys who could make an impact at the MLB level this year, and at least the first two shouldn’t be surprising. Zach Walters, in a utility role, has some potential to play. Interesting note that was news to me – 25 of the switch hitters’ 29 HRs in AAA last year were as a LHP. He also mentions Eury Perez and says “You can make a case that Perez belongs in the top 10 based on his defensive profile in center and his easy plus speed.”

The less-familiar name is probably Aaron Burnett, who “projects to be a late-innings reliever at the highest level.” Should be interesting to see how he does this year, and when someone in the bullpen inevitably has a poor season, if he is the next in line to come up.

He ranks Strasburg above Harper, which not everyone would do, but he has his reasons. While this doesn’t really give you any new information, it’s interesting see how he (I believe it was actually Mark Anderson who wrote this part) decides which one is ranked higher. In other words, which one he’d rather have

Both players are burgeoning elite talents with the potential to leave a long-lasting mark on the game. In attempting to differentiate between a legitimate ace starter and a 21-year old entering his third year with the potential to be one of the great power hitters of all time, splitting the hairs between them comes down to personal preference… Strasburg has made 58 starts for the Nationals since returning from Tommy John surgery and the gloves should truly come off in 2014; a circumstance that could result in an absolutely monster season with massive strikeout rates and minuscule hit rates.

Unfortunately, he then gets into the old saw about how you can’t really trust Harper because he’ll run into traffic and die at some point or whatever the case is because he injured himself last year.

Regardless, it’s nice to think of Strasburg in this way, and quite frankly, if he doesn’t have a monster season, it will be a disappointment. He might only rank 3rd on my upcoming NL East pitcher’s ranking – there’s a case for 4th best “Ace” in the league if Matt Harvey was actually playing. I’m ready for him to take those gloves off and show what he can really do. The Nats will be just fine if he’s “only” an ace and not a top 5 pitcher in baseball, as many thought he would be. But they’ll be better if he’s both.