A Trade! Perhaps a Steal? 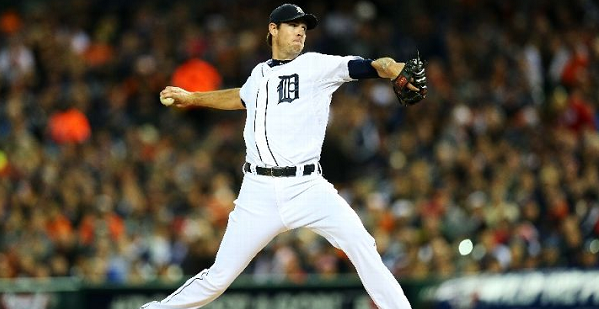 Really, is there anything more exciting in the offseason than a trade? Well, maybe there is, but consider that question rhetorical. The Nats acquired Doug Fister for Steve Lombardozzi, Ian Krol and Robbie Ray. As with any trade, there are two sides to it. So let’s start with what the Nats get.

Doug Fister was certainly buried in the Tigers rotation this season, behind Verlander, Anibal Sanchez and Cy Young winner Max Scherzer. And, heck, he might well be the 4th best starter on the Nats next year. But make no mistake that this is a reflection of the talent level of these two rotations, and not a slight on him. 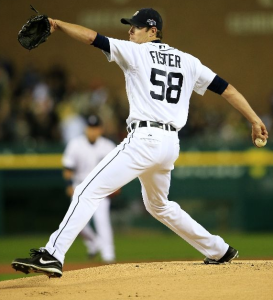 In fact, despite having the 4th best WAR on the Tigers pitching staff, Fister had the 8th best WAR in the American League this season. His 4.6 WAR actually beat out Jordan Zimmermann, Stephen Strasburg and Gio Gonzalez in 2013, for what it’s worth. But WAR isn’t everything, so let’s see what else there is.

He’s only been with the Tigers for 2 1/2 seasons, after they acquired him from Seattle for a song, and he turned it on. He doesn’t throw the ball particularly hard, both his sinker and 4 seamer are around 89.5 mph. He gets a big velocity drop with his curve (74 mph), and has some variety with an 86 mph cutter and an 80 mph splitter. But it’s his sinker that he relies on the most, he threw it almost 45% of the time in 2013, and that pitch is the main reason why, while many waited for a regression that never came, his peripherals suggested that he was actually a pretty good pitcher.

As a 4th starter, he’s probably one of the best in the league, but “position” in the rotation doesn’t really matter. What matters is he’s been a very good, reliable starter for 3 seasons now, and is under control for two more. He lets the Nats feel confident that they can go into next season with one of the very best rotations in all of baseball, and not just at the top. With Detwiler, Roark and Jordan filling out the 4, 5 and swingman spots, things were potentially good but very risky. But with those 3 all able to take the 5th and swing spots, this rotation just looks great.

The Nats were not able to get Fister for a bag of rocks, at least not literally. They had to give up some players. First on that list in terms of playing time was Steve Lombardozzi. Lombo wasn’t a bad player, but he’s one of those fun-to-watch hard-nosed kind of guys that probably projects more value than he really has. With almost no power, he has to get on base a ton to add real value, and he’s just never done that. Assuming he can play shortstop, and that may be a big assumption, he should have a role for a long time as a backup middle infielder. But he’s really not more than that, and if he can only play 2B, his value drops. He has more value on an NL team, but that’s not to say he is totally devoid of value in the AL.

Ian Krol had a very good year as found money for the Nats in 2013. The 22 year old lefty reliever was on no sort of prospect radar before this season, but he came up and demolished all hitters he faced – as long as they were lefties, too. He actually stunk against RHH, allowing a .957 OPS in only 61 PAs. He really was effective against lefties, though, posting a .593 OPS against in 56 PAs, predominantly off a 94 mph fastball. A useful player, but potentially just as a LOOGY, and those are usually inexpensive.

The only guy the Nats gave up that they might miss is Robbie Ray. Ray did make Baseball America’s top 5 for the Nats this year, although he was nowhere to be found on any lists last year. He’s a lefty starter who had a strong 2013, with a 3.36 ERA between high-A and AA this season. He also struck out 160 in 142 IP and was only 21 this year, so you start to see the appeal. The most recent scouting report on him from Baseball Prospectus notes an “easy plus fastball; fringy slider; developing changeup” and that “fastball velocity has taken a large step forward in 2013.”

In exchange for a very good starter, the Nats gave up a prospect and two guys that most people wouldn’t care if they were left off the opening day roster in April 2014. Ok, some fans loved Lombo, but that was more for his ability to fill in than for when he was actually starting. Ray is a guy who would have made Nats prospect lists this year, BP’s Jason Parks said he’d be Top 5. But even he said Ray is “most likely a backend starter but he could find the middle of a rotation”, far from a future superstar, and that is really the only thing of significance the Nats let go.

The way I look it, the Nats got rid of one of their better pitching prospects (but not one their top two) for two seasons of a very good pitcher. The other guys almost don’t matter in this deal, that’s how irrelevant they are. Flip it around, imagine trading away Jordan Zimmermann for a backup 2B, a LOOGY and a pitching prospect, new to being an actual prospect, that is still a year or two away. This trade, to me, is a total steal for the Nats.

But don’t just take my word for it, let’s see what some other people say of Mike Rizzo’s acquisition of Douglas Wildes Fister:

Keith Law (in an article titled Tigers Don’t Get Enough for Doug Fister): “I can’t believe the Tigers couldn’t get more total value than this for Fister, who is easily a top 25-30 overall starter in the game… A lefty reliever, a backup at second, and a non-top 100 prospect is just not a good return for two years of one of the top 30 starters in baseball.”

Dave Cameron (his is called Nationals Steal Doug Fister From Tigers): “If Fister were a free agent, he’d have been the best starter on the market by a good margin… this just an outright robbery. In a market where the prices for mediocre pitchers are very high, the Nationals paid a moderate price for a very good pitcher.” Cameron (of fangraphs) has more. Much more. He is downright incredulous. Click the link on his name to see the article, and see a few tweets here. In fact, there’s so many that I may just make a post for him.

I love Doug Fister. I don't get it. Trying to figure it out. 29, team control, healthy, doesn't walk folks, doesn't give up HRs, #Stumped

I don't get this Doug Fister trade any more than anyone else does. I'd have traded Rick Porcello to open up rotation spot for Drew Smyly

So essentially, at least according to ZiPS, Nats get a pitcher 3 runs a year worse than David Price for *much* less than Price would cost.