The Nats to Hire Matt Williams – What to Expect 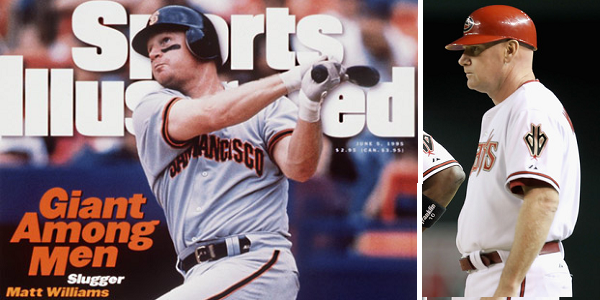 We are still waiting for the white smoke to emerge from the roof (which can’t happen until after the World Series), but we already know that, at least according to some very reliable sources, Matt Williams will be the new manager of the Nationals.

Sources: #Nationals plan to hire Matt Williams as manager with goal of keeping Randy Knorr as bench coach. Timing of announcement not known.

There are probably a few more sources I could dig up, but it doesn’t get much more reliable than Rosenthal, so let’s just dive into it.

He was a 5 time All Star, a 4 time gold glover, a 3 time silver slugger, and finished 6th in MVP voting twice. He finished 2nd in MVP voting in 1994 and 3rd in 1999. After a decade on the Giants, he spent a year in Cleveland on that amazing team that somehow lost to the Marlins in the World Series before moving to the Diamondbacks. His first couple of years with the DBacks were great, but he lost his power at the end, although he was on the 2001 World Series championship team before finally retiring at the end of 2003.

For those that gravitate to righteous indignation towards steroids users, you’ll have to decide whether it’s worth putting your principals aside and like this guy. His history with performance enhancing drugs aint pretty. He has admitted to HGH use, after being caught, saying it was on the advice on a doctor after an ankle injury, claiming he didn’t really know what it was. In his defense, I’m not sure who knew what HGH was in 2002. As for the steroids, well, he was named in the Mitchell Report, but I haven’t seen him ever address that.

I’m not gonna guess what he did or didn’t do on the steroids front, or throw suspicision at his HGH minor-admission.  However, I feel the same way about his PED situation as I do about it in general – it was probably a huge number of players that did it, I’m not going to vilify any one player that did it back then. It takes a certain kind of bonehead to do it now, but back then, I get the impression that almost everybody was doing it.

There is a lack of evidence of what kind of manager Williams would really be. The Nats hired someone with little experience managing at any level. He spent most of his career on the DBacks broadcast team after he retired, until being hired as their first base coach in 2010. He moved on to third base the next year and he’s been coaching there since. He did have an interim managerial job in 2007 for the AA Mobile BayBears after their manager, Brett Butler, had health issues. He also has managed in the Arizona Fall League.

One thing I neglected to mention when I first wrote this was WHO he managed in the AFL. That team was the Salt River Rafters, which had 8 Nats’ prospects, including Anthony Rendon, Matt Skole and Brian Goodwin, on the roster.

The lack of experience at the Major League level doesn’t bother me that much – the other candidates would have been rookie managers as well. On the other hand, they did have more minor league experience than him. Knorr had 6 seasons as a minor league manager, Jewett even longer. But while that certainly helps with experience, it doesn’t give us too much insight as to how they’d do in a big league role. So I’m not sure we’re at a disadvantage looking at that with Williams as opposed to the other two. And Matty isn’t going to be in charge of the dugout for the first time in his life here.

As for his style, all we can go on is subjective stuff with Williams. There are a few interesting articles on what kind of manager he’d be, including one that goes through the managers he’s played for, and the influence they’ve had on him. One piece of that article, if taken at face value, that kinda sorta terrifies me is this

Williams relies on gut instincts. But you also have to look at numbers and strike a balance, if possible.

“You can be overwhelmed by numbers sometimes,” Williams said.

Let’s hope he means “you can’t get lost in the numbers and miss the forest for the trees”, rather than “math is hard”. Then again, after he was passed over for the Rockies job, he was sort of praised for his intellect:

In his three seasons on the Arizona coaching staff, Williams has become respected for his work with the team’s infielders and his cerebral approach to the game.

So that doesn’t exactly mesh with what I might have gleaned from the first quote. As for his attitude, there isn’t much to say he’s going to be a total hardass, but working under Kirk Gibson does bring some thought on it.

He’s part of Kirk Gibson’s “no nonsense” regime in Arizona which contrasts with Davey Johnson’s more laid back style, be it perceived or genuine. It’s the sort of managerial hire you might expect.

Tough love is probably what a lot of people feel the Nats could use at the moment. Then again, in the first article I linked, he talked about players’ managers and said “The objective is to put your players in a situation where they’re comfortable, so they can succeed.”

So… we don’t really know what to expect. But I think evidence suggests he won’t be a total gut instincts guy only, that he understands the nuances of the game, and even if he isn’t going to any SABR meetings, he knows a thing or two about numbers. Remember, Arizona was run by a Theo Epstein protege when Williams was hired, before being run by Kevin Towers.

He also may or may not be nice to the guys on the team. All kidding aside, he is likely not as relaxed as Davey, because who could be? He is coming from a team that has had some recent success running a pretty tight ship, so we’ll see how the team reacts to that. Count me as one of the people who thinks a little bit more of that kind of attitude could have helped this season.

Williams is a respected managerial candidate outside the organization, and he was probably going to be hired for the position somewhere in the next few years. The fact that the Nats were the first to take a chance on him is a bit nerve wracking, but it wouldn’t surprise people in baseball if it turned out to be very smart.

Finally, here is a picture of Matt Williams and Mark McGwire fighting, presumably over the question “how much ya bench?”