Replacing LaRoche with half a LaRoche 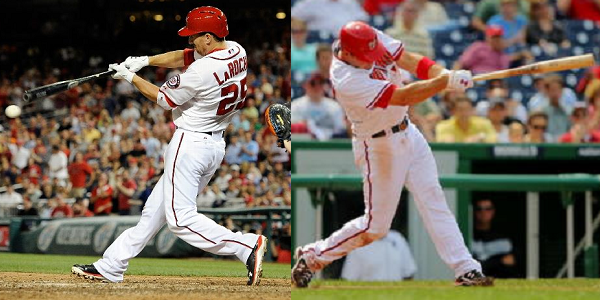 In the last article, we discussed the potential replacement for Adam LaRoche, after his poor 2013 season and the Nats likely desire to improve their lineup.

But it is entirely possible that, and bear with me here, Adam LaRoche isn’t a horrible player. And he might not be a bad player, even if he doesn’t get any better next season. How is that possible, you say?

Well, it’s possible that he’s really a platoon player, and could remain pretty effective against RHPs. We took a look at this more in depth in the middle of August, and his OPS numbers remain almost identical. Here are his splits, updated through the end of 2013

Despite the fluctuations, like every lefty, he’s been better against RHP. But the key point is the downhill trend in both numbers, and the spreading of the trendline. Even if we see a jump in his totals, and an increase in his hitting vs. LHP, it still probably won’t be great. This is likely more of an aging curve than anything else.

And because of that, it wouldn’t be unimaginable to think LaRoche, a decent fielding 1B (who may have lost a step but can still pick it), could survive in the majors for several more years, primarily facing right handed pitchers. It could very well be in the Nats best interest to start that career move now with him.

With that, they could get a right handed 1B who would be cheaper than your average starter, happy in a role, and effective as a part time player, in a good old fashioned platoon. Unfortunately, there aren’t a ton of righties with massive platoon splits. That’s because if you can’t hit righties, there’s a good chance you aren’t making the majors.

While in an ideal world Tyler Moore would fit the bill, there wasn’t evidence in 2013 to suggest he’s ready to do that. So below are a few guys that might be a good choice. I’ve also included a “perfect world” projection of what LaRoche and the potential platoon partner could do together, keeping in mind LaRoche had a healthy 17 HRs and hit .250/.357/.434 against RHP in 2013. You will notice there isn’t a a huge difference in the perfect world players, in part because more than 1/2 of those ABs (any vs. RHPs) should come from LaRoche:

Formed together with LaRoche like Voltron perfect world projection: 25+ HR, .345 OBP, can field very well, but not a gold glover

Kevin Youkilis – He’ll be 35 next year, which is certainly not young in baseball, and Youkilis has definitely played old the last few years. From his rookie year, at age 25, through his age 31 season, he hit .294/.394/.497 – just a single or two per month away from being that spectacular .300/.400/.500 guy. Since then he’s dropped off, with a .243/.350/.424 line over the last 3 seasons. That makes him more like a good hitter with a very good OBP. Back issues kept him out of the Yankees lineup for much of the 2013 season, but after a few strong weeks early on, he wasn’t very good for them anyway. If his poor performance was due to the bad back, it’s hard to tell what he could have done. But in his prior two seasons, where he was no longer the old Youk, he managed to beat up LHPs. In 2011 he hit .311/.426/.561 against them and in 2012 it was .275/.386/.492. This is playable at any position, and he’s a strong defensive 1B who would be able to 3B any time he was needed. He also still has the eye that earned him the nickname “the Greek God of Walks”, despite not being Greek (although the name is and the story is pretty cool).

Paul Konerko – Konerko’s played for the White Sox for the last 15 seasons, and is basically deciding to retiring or come back with Chicago in a bench role. That being said, maybe if the Nats threw some money and the potential to make the playoffs at him, he’d be interested. Despite turning 37, this was really his first subpar year since 2008, and his only really awful one since a flukey 2003. He’s a career .281/.356/.491 hitter, but that power and hitting ability are probably not around anymore. Still, even this year when he had a miserable .669 OPS, he raked lefties, hitting .313/.398/.525 against them. This is a bit extreme, thanks to a small sample size, but his career OPS is 91 points higher vs LHP, so it makes sense. He did battle back issues all year, so the decline vs RHP is probably due in part to some combination of that and his age, but its hard to imagine him as a full time player anymore. He has never been a great fielder, being 38 next year won’t help that.

Perfect world projected KonerkaRoche: 20-25 HR, .360 OBP, not the best fielding 1B out there

Will Middlebrooks – Middlebrooks is only going to be 25 years old, and had a very impressive 2012 season. But his 2013 was severely lacking, although his splits show promise. Over his two year career, he has hit only .239/.273/.443 vs RHP as opposed to a very impressive .285/.338/.500 vs LHP. He’s a good fielding 3B, who’s spent a little bit of time at 1B, and has looked good there. The problem with Middlebrooks is he’s still young enough to be a prospect, and the Red Sox certainly could hope he grows into something more. They also have many years of control left with him, all that together means if they did trade him he wouldn’t come cheap. His price tag is probably too high this year, and while it may look like he won’t be more than a platoon player, by the time we find out, LaRoche’s contract will be up.

Cody Ross – Inexplicably signed for 2 more years, albeit at a decent $8.5 M per, Ross is not a bad player. He is coming of hip surgery and would be much better if he never had to face RHPs. His career line against them is .250/.309/.407, unacceptable numbers for his position. On the other hand, he has hit .297/.362/.576 against LHPs, All Star Caliber numbers. His career numbers as a whole aren’t bad, but the .324 OBP isn’t good enough for a starting OFer that isn’t a great CF. He’s never actually played first base, but he’s coming off of an August hip surgery, about to turn 33, and may not be a good outfielder much longer. Between his serious platoon splits and his age and injuries, first base, sharing time with LaRoche, might be a great place to put him.

While some of these combos might be a bit of a reach, it might be dependent on what these guys get offered. While they might not get a full time role, they might be very amenable to a relatively set spot in the lineup depending on the opposing pitcher. As I mentioned earlier, righties tend to lack the severe platoon splits that lefties do. But there are a few guys out there who fit the bill.

So am I missing anyone? Not just from the platoon splits, but from yesterday’s total replacement list as well? Let me know!