Is LaRoche a Platoon Player Now? 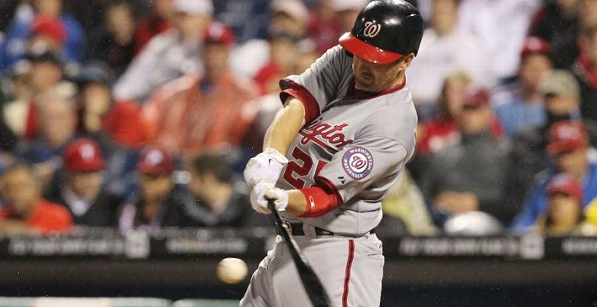 Obviously Adam LaRoche has had a rough season. He’s still hit 16 HRs this year, which is nice, but his .320 OBP is pretty awful. Much of this awfulness is thanks to his troubles versus left handed pitchers.

In fact, versus righties, LaRoche hasn’t been that bad. His .253/.341/.451 has a perfectly acceptable OBP and give him an OPS that, while not spectacular, would rank 7th among the 15 NL first basemen with 250 or more PAs. This is the kind of middle-of-the-road-for-a-1B bat that they probably expected from him, and it’s a bat with which they’d be happy.

But they aren’t allowed to just bat him against righties, you know? So he gets 1/4 of his PAs vs LHP because they, of course, have no choice.

Yeah, you know, they actually do have a choice. They could just platoon him, and pretty much bat him only against RHP. But, aside from this year, is there evidence to do that?

Over the last few years, LaRoche has certainly hit better versus RHP than LHP, but that’s to be expected. He has had a few years, such as 2012 and 2010, where his numbers were actually pretty close, with an OPS difference of right around .040 in both cases.

But those were his good years. When you throw in his bad years, in terms of splits, the numbers don’t look as good. Over the last 5 seasons, he has had an OPS difference of .126 depending on his handedness. That’s an OPS of .828 vs RHP up against a .701 vs LHP.

Taking a look each year, you can see the difference over time is there, and that is certainly is worse in some years than others. 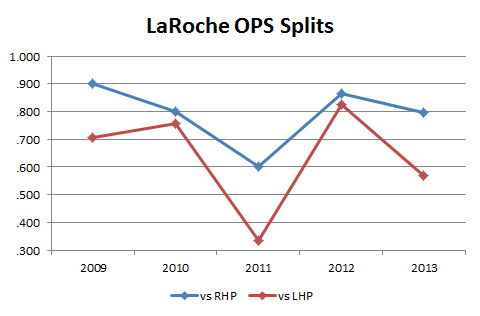 At first glance, this doesn’t seem to tell us too much. In the bad years it’s awful, but if he could replicate 2012, than you’d be perfectly happy to take that one again. But throwing a trendline in there, it starts to look a little more worrisome.

A little eye-opening, if not particularly statistically robust in the analysis. It highlights though, what’s been going on with LaRoche over the last few years. Sure, he’s had some very good ones, but in general, his OPS is slipping. And as it is going down vs RHP pitchers, it’s doing so even more vs LHP.

The worry then really comes to light. It’s not that he can’t hit LHP as well as RHP, that’s pretty standard for a lefty hitter. At least many good lefties have that problem and nobody thinks to platoon them. Instead, as his OPS slips in general, his OPS vs LHP is slipping at a slightly faster rate. But even if it wasn’t going faster, the slip alone is enough cause for concern.

It’s obvious where I’m going with this – as his total OPS gets lower thanks to the inevitability of age-related decline, his OPS vs LHP has started to slip into unacceptable territory.

LaRoche wasn’t always a platoon player, he certainly wasn’t one last season or in 2010, although maybe he should have been in 2009. But he’s getting closer and closer to that point, if he’s not there already.

This is a different situation than someone like Bryce Harper. Harper’s splits are pretty bad, with a .919 career OPS vs RHP and a measly .660 vs LHP. The difference is, of course, Harper’s age. Harper just hasn’t had the ABs versus lefties to overcome the disadvantage. This is one of those occassions where you go “oh yeah, he’s only 20” – and if 5 years from now it hasn’t improved, then you know.

LaRoche, on the other hand, is on the wrong side of the age curve, at 33, and is beginning (or is in the midst of) what appears to be that age-related decline. He certainly could hit better in 2014 than he did in 2013, but he may not.

The Nats have to figure out what the heck to do with him now. If he does improve in 2014, that OPS vs LHP may still be as low as .600. If they envision that happening, they need to work on how to play him. They can choose to deal with the bad splits, or get a platoon going.

The problem with a platoon is they need someone on the other end of it. Tyler Moore seems like a decent fit, but he’s got to prove he can hit again in the majors. The Nats would be smart to give him the chance to do that now. LaRoche is hitting so poorly against LHPs that they might as well go ahead and give Moore a shot. It likely won’t hurt them now, and it could give them answers for next year.

The other option is to find a full time replacement, be that a trade, a free agent, or Ryan Zimmerman. Any of those things are possibilities, but the Nats have to make that decision. If they don’t do anything, and allow LaRoche to continue as he has, assuming he doesn’t improve, they’re going to be hampered with the offense again next year. And going in to the season with such a handicap just doesn’t make sense.