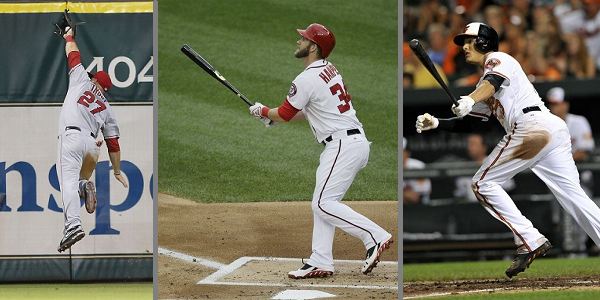 Baseball is constantly undergoing renewal, thanks to the annual drive for championships and the blatant age-ism displayed by physical abilities. We see great players come of age and fade away, often in the space of just a few years. Players are usually at the best in their late 20s, and in many cases are retired by their mid 30s.

Right now, though, there is a bumper crop of young players dominating 5 years too early. There’s an abundance of young superstars in this league, guys that aren’t just good, they’re great, and they are under 25 years old. You know about the big three super-young studs that are constantly being compared to each other – Bryce Harper, Manny Machado and Mike Trout. Those three are the youngest superstars, and may end up being the best of the bunch, but they aren’t the only ones.

It’s a great time to be a fan of baseball, not just a team, but all of baseball, because of the sheer amount of talent that has sprung up recently. I picked out a group of players that I think will be perennial All Stars, that I’d take any All Star group and have a good chance of winning, and they’re all under 25 years old.

Perez might not be a superstar yet, but he can’t help that he plays in Kansas City. He is behind only Joe Mauer in batting average among AL catchers, but it isn’t his hitting that sets him apart. He’s considered one of the top defensive catchers in the league, and this is evidenced by his CS percentage that’s top 5 in baseball right now. His hitting should only get better, and it will get him noticed, but because of his defense, people will be talking about him as the best overall catcher in the league in a few years, especially when guys like Yadi and Posey start to slow down.

At just over 20 HRs per year in his first two seasons, with an OBP right around .340, he was already starting to get noticed. But on a team with so many storylines for hitting – the Upton brothers, Heyward’s slow start, some janitor… Freeman may well be the best hitter on the Braves right now.

This one was kind of tough, as there are a few other young guys who are also playing great second base. But Rendon has much more power than Altuve and he’s got a better OBP than Gyorko. But Rendon is doing this year what Altuve did last year – just hit all the time – only with extra base hits thrown in there. Rendon has hit safely in 80% of his games since he’s been recalled to the majors, and has been a catalyst for the Nats lineup, hitting second for much of the time. Since he was drafted, scouts praised his swing, his pitch recognition, and his ability to get base hits with gap-to-gap power, and he has quickly shown that ability in the majors. Watching him play, what might be the most impressive thing is how quick his hands are, giving him the ability to get inside on just about any pitch. It’s not hard to imagine batting titles in his future.

There’s no real competition here, both because of the lack of young 3B and because how great Machado is. He’s leading the league in doubles and is on pace to break the record. Enjoy that while it lasts because in another year or two many of those doubles will disappear… into the outfield stands. He’s a great defensive player as well, and will probably move to SS in another few years, making him even more of a star.

Currently leading the NL in hits, Segura also has shown more than enough power to be one of the best at his position. To say he was unheralded before this year is inaccurate, but you just don’t get much attention when your organization’s top prospect is Mike Trout. But people noticed when they traded him to Milwaukee for Zack Greinke, and so far he looks like a steal for the Brewers. He looks to be a multi-year All Star starting this season, and batting titles and gold gloves lie ahead for him. Pretty impressive for a guy who was converted to SS from 2B just 2 years ago. 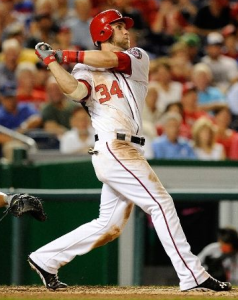 Harper’s not just the youngest guy on this list, this June he was the youngest player on his team when he rehabbed with the high-A Potomac Nationals… by six months. He has shown the kind of raw power equaled by few others (that’s not just hyperbole), and has such a good eye, it isn’t hard to envision quite a few upcoming seasons with a .400+ OBP and a .600+ slugging. He’s going to be a staple in almost every All Star game for years to come, and will be in the MVP discussion for the next decade. His style of play make him hard to dislike when watching him, but the numbers make him one of the very best already.

A superstar last year, an argued by many to be the most valuable player in the American League last year, he’ll certainly be in that discussion for the next decade as well. He’s the total package, with great defense, a high average, 30 HR power, and the ability to steal bases. He’s 4th in the AL in OPS, and he’s a far better defensive player the the three above him. A no-doubt superstar, get used to him starting the All Star game as well, cause he’ll be there a while.

With only 112 PAs in the majors, I struggled with putting him in this spot, because Giancarlo Stanton is so good. But Puig, just coming from another league and country, has played like he’s from another planet and is now empowered by our yellow sun. His first week was like nothing we’ve ever seen, with 4 HRs in 5 games, including a grand slam, and an outfield assist. And in his first month, he was named NL Rookie of the Month and NL Player of the Month. The struggling Dodgers have gone 16-10 since he’s arrived, and have managed to move themselves only 2.5 GB the West lead, all on the back of this 22 year international sensation. He is leading a revolution in Los Angeles, where, with all due respect to a season or two from Matt Kemp and Shawn Green, they haven’t seen someone with this kind of power since Mike Piazza in the mid-1990s.

While not necessarily putting these pitchers in order, I think the guy who’d leading the NL in ERA and Ks deserved to be listed first, even if he isn’t necessarily the best of the bunch. Although he might be the way came out of the gates this year. He is a power pitcher with a fastball averaging 96 mph, as well as a slider, a curve and a changeup that people can’t really hit. He’s got serious strikeout stuff, and he’s showing it every outing this year.

Strasburg has to be mentioned, as he might have the most name recognition of any of these pitchers. But he’s also earned his spot here, right now he’s 5th in the majors in ERA, and when he’s on, he’s pretty unhittable, with great numbers in a bunch of categories like AVG & OPS against and WHIP. His fastball, averaging close to 97 mph is the fastest among starters on this list, and he’s got a knee buckling curve to go with it. His name may be more associated with a shutdown for many fans, but it should be associated with Cy Young votes and All Star games for years to come. 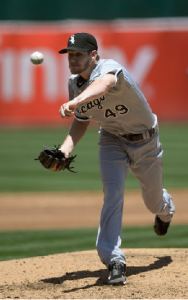 Stuck on a bad team this year, Sale might not even get 6th place in the Cy voting like he did last season. But tied for 4th in ERA and 5th in strikeouts, he certainly deserves the recognition. Sale has a nasty fastball that averages close to 95, and an unhittable changeup that is 11 or 12 mph slower. He gets an incredible swing and miss rate of just over 17% on BOTH his changeup and his slider, in part because that heater is so vicious. He was an All Star at 23, should be again at 24, and at this point will be at least a top 10 Cy Young vote getter, the White Sox record notwithstanding.

Bumgarner has had to play second, or even third fiddle, to a few great pitchers of recent seasons, in Matt Cain and Tim Lincecum. But he is the best pitcher on the Giants right now, and going forward, he’s the best bet to continue to be the best. After curiously losing a few mph on his fastball a few years ago, he got himself into better shape and hot his velocity back. On a team that for the last decade has always seem to find a young pitcher to lead it, MadBum is their new leader.

His ERA and his strikeouts are real nice, but watch Shelby Miller pitch and it’s his fastball that will get your attention. He throws it alot, and he’s good with it. Joining a long line of pitching greats in St Louis, he’ll rack up a ton of wins on that team, and make alot of All Star games. But it wouldn’t be an undeserved, pitcher-Win based reward for him, he’s one of the best pitchers in the NL already, and he’s only thrown a shade over 100 innings.

2B – Jose Altuve (24) – I had a little trouble with this one. At .286/.324/.368, his numbers are pretty underwhelming. And it’s hard to say he projects to be an perennial All Star, let alone an MVP candidate. But he got a ton of attention last year, and “how many Altuve’s” is a thing, so… I figured I should at least mention him.

2B/SS – Jurickson Profar (20) – Hasn’t really shown it yet enough in the majors, but many think he’s going to have the star power of the Trout/Harper/Machado holy Trinity

SP – Matt Moore (24) – This was another tough one, I really wanted to put Moore in the top 5 rotation. He’s more likely to be a true ace than Sale or Miller, his stuff is that much better. But he hasn’t quite put it all together, as evidenced by his league leading 51 walks. He’ll get there, and probably pass some of the other guys, but he’s not there yet…

There’s more than enough players under-25 to make an All Star team, made up of almost all MVP/Cy Young candidates. It’s a good time for young players in baseball right now.  It’s a good time to be a fan, too.