Waiting for a Turning Point? You Already Missed It

If the Nats end up making the playoffs, there will be a few games that people will point to and say “that’s it, that’s where they turned it all around.” And the Bryce Harper return game on July 1 will be a popular one.

In his first AB after sitting for 31 games, on the second pitch he saw, he deposited the baseball in the left field bullpen. It was a fitting return for a superstar, and it certainly wasn’t a disappointing way for Bryce to remind the league just what they’ve been missing. And if they do make the playoffs, chances are Bryce will be a big reason for it. He is probably their best player, and it’s hard to argue at this point that anyone on the team is a better hitter. When he’s going right, there aren’t many people in the league who can argue that they’re better hitters.

But if things do indeed turn around, I’m convinced Bryce’s return happened after the real turning point. That happened almost 3 weeks ago, on June 8th. What happened on June 8th? Nothing.

But it’s what happened immediately before June 8th that turned the season around. On June 4th, Jayson Werth returned to the Nats from the DL.

On June 5th, Anthony Rendon returned to the Nats from the minors. Then, there were two consecutive rainouts, and up came June 8th. Maybe it was the rain, and those extra days off when Werth, and a few others, might not have been 100%. Or maybe it was a couple of days looking at the revamped lineup, but ever since then, the team has been playing much better.

Since June 8th, the Nats are 13-10. That may not seem like anything special, but its not really the record that I’m talking about. That being said, if you go through the season with 13-10 chunks all the time, you end up going 91-70 with one game to go, which might be enough to win a division.

What I’m talking about, though, is the offense. The putrid offense (13th in runs scored out of the 15 NL teams) is the reason why this team is only 2 games over .500, and not more. But since Rendon and Werth came, they’ve been significantly better. Including the Bryce Harper return game, they’ve averaged 4.57 runs per game. That’s a great number – it would be good enough for 3rd in the NL if that’s what they had done all year. (And I know they haven’t done that all year, I’m just trying to give perspective on where that number sits).

Forget about the Harper comeback game, though. Because I’m suggesting they were already doing it before he came back. Prior to the 10 run game, the Nats scored 4.27 runs per game, which would sit at 4th place in the NL this season. Sure, it’s skewed by their 13 run Sunday, but that’s kinda just the point – that was without Bryce. And it’s not just Rendon and Werth that are making it happen.With those two in the lineup, several things happen.

First, you are taking out guys that have been hitting below replacement level (Danny Espinosa‘s OPS is the worst in all of baseball for anyone with 150+ PAs).

These guys in the lineup, instead of what were essentially predetermined outs, makes the lineup very different. Even if Zim, Desmond and LaRoche were hitting (and really only Zim was in May), the lineup is still incredibly weak without them. You can basically expect something from your 2-4 hitters, and that’s it. If one or two are having an off night, it’s almost impossible to score more than a couple of runs. 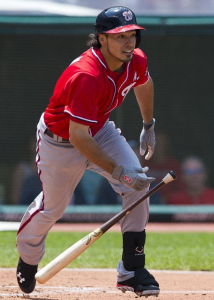 Throw in 2 more guys, though, and suddenly you’re talking about your 2-6 hitters. Much better. A couple of guys can stop hitting, and you still score. But that doesn’t happen. Instead, Desi and LaRoche get hot again. Coincidence? Absolutely not.

It’s not about lineup protection, it’s about the length of the lineup. You see, when a pitcher faces Zim, Desi and LaRoche then nothing for 6 batters, he has a pretty easy night. He can save that extra mile per hour or two for those guys. And the second and third time he faces them, he’s still at a reasonable pitch count, and has some gas left in the tank.

But when you lengthen the lineup to 5 hitters instead of 3, suddenly the pitcher gets more tired. They can’t just roll through the majority of the lineup without breaking a sweat. Suddenly, guys like Kurt Suzuki start hitting again. Because they see Suzuki as a “break” now from the tough hitter, and they are more tired, and he’s anticipating different pitches. And also because his second and third time to the plate, he’s not facing a guy who’s cruised through 2/3 of a lineup, he’s facing a guy who’s worked.

All this, of course, is predicting that the Nats are suddenly going to be a better team. But it’s hard, with the way they were hitting, for them to not be better. Filling the 2-6 spots in the lineup with dangerous hitters makes everyone hit better.

That’s when you get the opportunity to bring Bryce back to a team that was already starting to hit. Then it’s making 2-7 dangerous, and it aint by adding the 6th best guy there, it’s by adding the best.

If they can get Ramos back and healthy this week, that makes a really impressive 2-8. It’s 6 guys who can hit 20+ HRs over the course of the season, plus a 7th in Rendon, who might not get that far but is still a great hitter.

And I’d be willing to bet that Denard Span, who has struggled all season with a .263/.318/.364 line – powerless and too low of an OBP to make up for that. It aint because “hitting is contagious”, it’s because bad pitching is cumulative. The tougher a lineup is, the more likely that Span will get more ABs against pitchers who are gassed or just not confident in what they are throwing.

This still isn’t the best lineup in the game, and it won’t be. But it isn’t hard to see them being in the top 1/3 of the NL for the rest of this season. And if they do that, especially with the way Stras, Gio and JZimm have been pitching the last month… what? Oh, you didn’t know?

Yeah, with that lineup, and those pitchers, it’s easy to remember why so many people were picking the Nats as favorites.

Bryce Harper is an essential piece to this team, he’s the best hitter in the lineup, and they can’t really be the team that we expected without him. But when people notice that the Nats have started scoring runs and winning games, and people look to Bryce’s HR as the turning point, just remember – it had already turned around before Bryce came back. The train’s been rolling for 3 weeks now, ever since Rendon and Werth sat through 2 rainouts as starters.

All that being said, it’s still really nice to have Bryce back. Let’s watch that HR again…

You might have missed the turning point, but you haven’t missed a ton of great baseball.