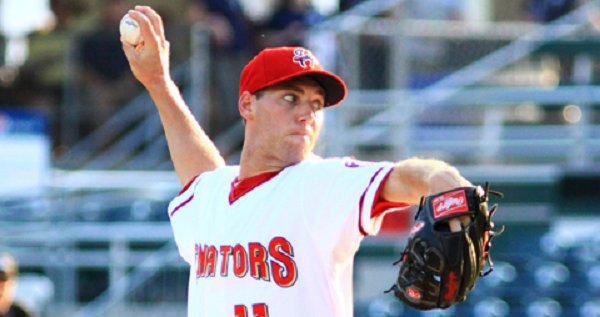 With Dan Haren on the DL for a shoulder injury and general bad pitching, the Nats will need an additional starting pitcher this weekend vs the Mets. There have been hints and allegations that filling this role will not be Ross Ohlendorf, who has acquitted himself well in his 2 Major League appearances this year. Instead the job will supposedly go to  Taylor Jordan, currently pitching for AA Harrisburg. At this point it hasn’t been formally announced, but…

He is a little bit of an unknown, although he did have a strong 2011 as a 22 year old in low-A Hagerstown. Then he went through the Nats pledge hazing ritual, also known as Tommy John surgery, and came back to finish off 2012 much less impressively, with a 4.05 ERA. 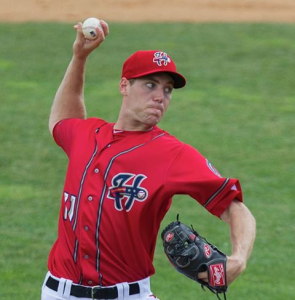 He’s been rewarded for his great season, and not just with a (probable) call to the big league club. He was named to the Eastern League All Star team on Wednesday. The question now is, assuming he does get called up, will he play well enough to stay in the Majors and not be back for that All Star Game?

Jordan didn’t make the Baseball Prospectus Nats Top 10 Prospect list, or the additional 3 “prospects on the rise” in that post. He did, however, make the 2012 list, although it was outside of the top 10, as #15. The blurb about him was short and sweet:

Groundballer who throws strikes, but there are questions about ability to miss bats as he moves up.

He certainly hasn’t been a prolific… um… bat misser (?) in the minors this year, but in his 54 IP in AA, he’s piled up 43 Ks. That might not translate to 7.2 K/9 in the majors, but since he’s a groundballer, it’s probably more important to look at his K/BB. There he’s been around 4.80 in both A+ and AA, which is a spectacular number. Even as that inevitably slips in the majors, it still has room to be very good.

Baseball Prospectus also has mentioned him several times in their minor league updates this year, specifically to certain performances, but with some more general descriptions:

April 17: Jordan’s fastball can work in the low 90s with life, his slider has a chance to be solid-average, and his changeup already usable

May 18: plus fastball; solid-average slider; average changeup; stock on the rise

June 12-13: plus fastball; solid-average slider; average changeup; plus pitchability. I’ve heard good things about Jordan; the ceiling may not be crazy high, but he’s a future big leaguer

He did make mlb.com’s feature on the top 20 Nats prospects. They really like his sinker, as well as one of his secondary pitches.

He came back late in 2012 and was already showing the stuff that excited the Nats pre-injury. His velocity was up to 96 mph, higher than before the surgery, with good sink that generates a lot of groundouts. He complements the power sinker with a good breaking ball and generally throws strikes

Earlier this week, Keith Law gave an opinion on Jordan, in a way.

Strike-thrower, up to 95 w/good CH RT @pbsenerchia: Rumor has the Nats calling up Taylor Jordan – what do you expect out of him in MLB?

Ok, so there’s not a ton of opinion there. He throws it hard, which is nice, and Law likes his changeup… a secondary pitch is important even if you’re a member of the Ross Detwiler school of throwing mostly of fastballs. Of course, it’s a little confusing because mlb.com mentions his curve and Law mentions his change. When you’re tracking hundreds of prospects, this is bound to happen, and I’m guessing it’s an error by one of them, rather than a sign that BOTH pitches are plus.

I assume that the lack of thoughts on Jordan is a result of Parks not actually seeing him in person. Meanwhile, Scott White over at CBS sports compares his career path to Brandon Beachy’s, although doesn’t claim he’ll be that good.

Jordan is, first and foremost, a groundball pitcher, and that’s what we should be seeing when he’s out there. If his starts with a bunch of fly balls to the outfield, even if they are caught, that isn’t a great sign. Strikeouts, on the other hand, while they aren’t his bread and butter, are almost never a bad thing.

He’s got good control (ability to throw strikes), judging by the lack of walks throughout his career. But what we don’t know is his command (ability to hit a spot) and it will be interesting to see how he does there. If he wants to be like Detwiler – throw lots of fastball for strikes and induce grounders – he’s got to locate his pitches very well.

Success is relative, and if he could pull of a quality start (6+ IP, 3- ER), then I think the Nats would be happy. Anything better than the bare minimum there would be spectacular, and might even earn him a second start.