Karns Gets the Call 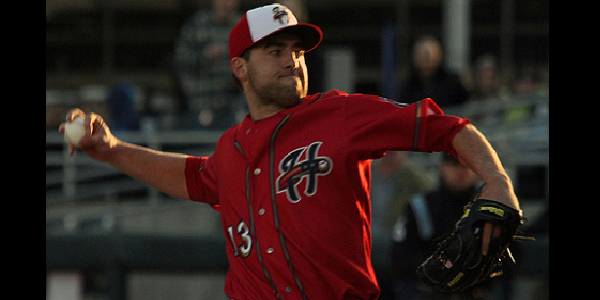 Nate Karns is going to start his first game with the Nats tonight, his first game anywhere in the big leagues. His journey hasn’t been an easy one, thanks to serious shoulder injuries, but he has had success in the minors. Some of that success could be attributed to his age, but not his experience in pro ball, he’s only in his 3rd season as a pro despite being 25.

This year he’s been pretty good at AA Harrisburg, although not spectacular. His 4.60 ERA this year isn’t anything great, but his 55 K in 45 IP (as a starter) is. Looking at his actual starts, though, he’s had a few bad ones, and he’s had some really good ones. In his second start this year he gave up 0 ER, and followed that with 4 consecutive starts giving up 1 ER. The starts that bookended that 5 game streak were bad, though, and his last two were mediocre.

Prior to this season, though, he was quietly moving up the prospect ladder for this team. He made a few lists of Nats best prospects, and here’s what I said about him after Keith Law named him to his Top 100 list:

This one was a surprise to me. Yes, I’d seen that Karns had a great 2012, but without my eyes on the player (and any knowledge of scouting) it’s hard to identify prospects, especially ones who are 25 years old. But Karns had major shoulder issues that kept him from pitching at all for a few years, and 2012 was his first “full” season in the pros. His fastball sits in the mid-90s and he was very effective with his curveball (Law referred to it as a “yellow hammer” which I had to look up – basically a 12-6 curve) so that “he could have two pitches that grade out at 70 on the 20-80 scale.” Health is the question mark with Karns, rather than age. He saw real success in high-A last season, which means he might join Rendon and Goodwin in AA to start the season. Karns is 25 and had a 2.17 ERA, with 148 K and 47 BB in 116 IP  at the A and A+ levels last season.

He also landed on the Baseball Prospectus Top 10 for the team, and I made mention of him when that one came out:

Nate Karns, the unheralded prospect before last season, landed #5 on this list as well as Keith Law’s list. His health questions notwithstanding, Parks notes that Karns pitches a good, low zone fastball in the low-mid 90s and can miss bats.

Well-regarded before the season, he hasn’t been consistently good this year. But he also has shown that he can strike out AA hitters and, thanks to being spotty rather than just mediocre throughout the year, he has shown that when he’s on he can be quite effective.

It will be fun to watch a guy debut that isn’t as highly regarded as some of their other prospects, but still has a shot a being a big league regular. I’ll be watching for him to keep that low fastball low, and I’m excited to see what his curveball does to Major League hitters.