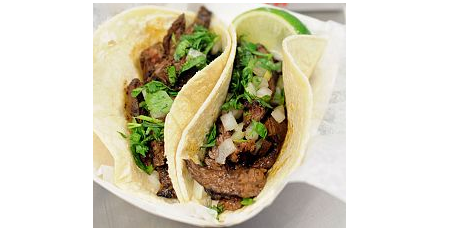 Jay Jaffe, former Baseball Prospectus mustache/dark beer expert and current Sports Illustrated resident baseball expert (at least I assume that’s your title if your blog has the address mlb.si.com) wrote a wonderful article entitled 20 Ways to Improve Baseball Right Now. Wonderful, of course, because I agree with almost everything he wrote here.

A few of the ideas I really liked and some commentary:

All good stuff, but the last one really got me going: #20 More tacos at ballparks, and better beer, too.

This is basic common sense — baseball with beer and tacos is the three-run homer of combinations. Every ballpark should spice things up by featuring an abundance of quality taco options for meat-lovers, vegetarians, even vegans, because unlike the mystery meat in those scary, processed hot dogs, you can see what’s filling that tortilla. Accompany that by putting better beer on tap as well, ideally, locally produced brews reflecting the craft beer revolution.

I couldn’t agree more. First of all, I’ve long been an advocate of good beer at Nats Park. But let’s start with the tacos.

Nationals Park has a great spot for these wonderful treats from the land of the Aztecs. El Verano Taquería is located on the second deck, behind center field, and it makes some delicious tacos. 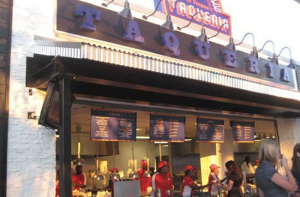 I believe Jaffe, a current Brooklyn-ite, may be familiar with this establishment as its ownership group operates one other El Verano, and that is in Citifield in Queens. It’s definitely one of my top food choices at the park. Although I first wandered there after being overwhelmed by the size of the line at Shake Shack, I have returned to it as the primary choice for many a game. If you’ve tried it, you’ll probably agree with the above statement by Jaffe about the need for more tacos.

Just take a look at these tacos! They are good stuff and they seem somewhat authentic, although I am far from an authority of what makes an authentic taco. 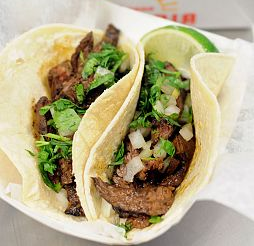 Beyond that, and I’d argue more important than the tacos, is the beer. Right across from the taco stand is a giant outdoor bar.  Unfortunately, although it is a great use of that space, it only serves your average run of the mill low-intensity brews. Blue Moon and Yuengling are probably all I’d really want there, although they may have Heineken as well, which aint bad. Now I am not one to put down those who drink Miller Lite or the like – to each his own, I say. But I think more and more people like variety, the opportunity to try new brews, and well, more flavor in their beer.

Luckily, there is a spot in Nats Park where one can find quite a selection of brews. While the upstairs of the Red Porch seems to be the closest thing to a bar type establishment in the Park, the downstairs area of the Red Porch hides a secret – the biggest beer variety in the stadium. Whenever I arrive at the stadium, I walk past the crowd waiting on line to sit and eat downstairs in the Red Porch and make a right after the host stand to enter the downstairs bar. And there is where you will find a nice variety of craft beers, many of them local.

I couldn’t find a list of what is served there, but from memory I know they have a great craft beer selection including a few semi-local beers. Here are a few I remember just from 2012:

Not to mention some flavorful non-craft beers

I may not like everything on this list, but the selection is pretty great. Nats Park would be smart to make a couple of spots throughout the stadium, perhaps near home plate, on the complete opposite side to the Red Porch, where more of these are available. My other request, and I’m not the first to make it, would be to include more local beers – how about Port City (VA), DC Brau (DC), or Flying Dog (MD)?

My constructive criticism aside, the point is that you can get plenty of great beers here, and that in itself is pretty spectacular. And new. For all the complaints we can make about little things here and there, this really serves to remind me how much I enjoy catching a game at this stadium, how good the experience is there, and how much I’m looking forward to the season starting.

I’m not sure if he’s been recently, but today Jay Jaffe would find Nationals Park as good a place to catch a game as there is, with it’s clean lines, delicious tacos and great beer choices. That and the team, which I hear might be pretty good. I invite him to come join me at the stadium this year – he’d get to watch an amazing team, I’ll share some of my 3 tacos meal and even buy him a beer (but I’m not sharing one).