Bryce and Maybe the End 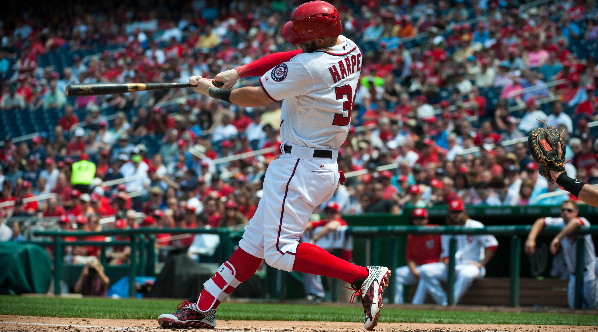 As Bryce Harper approached what may be his last day in a Nationals home uniform, he became reflective and, it seemed, a bit wistful

Bryce Harper is in full uniform 3.5 hours before the game. Said he wanted to get here early and enjoy putting on the white jersey for what might be the last time.

Bryce Harper arrived early and already is in full uniform. “It’s definitely crazy walking in today knowing this could be my last game at Nats Park in a white jersey.”

I find myself with a bittersweet feeling, too, over the potential loss of Bryce. Not for what it means for the Nats, although while I’d love to have him on the Nats forever, I understand the number of reasons why it might not make the most sense.

Rather, I will miss Bryce because he was something special for this team and this town, that nobody else on the Nats seemed to match. He’s a superstar in every sense of the word, and he was our superstar.

Bryce was not the first superstar to come up through the organization and play for the Nats, Stephen Strasburg holds that distinction. And Strasburg was something special when he arrived, hyped up in the press as the next “greatest pitcher ever” similar to the style of hype we saw with Bryce, but to a lesser extent and for fewer years. It’s hard to remember what he was at first, with the injury that followed and his current run-of-the-mill ace-like abilities interrupted by injuries. But his fastball sat at 98 mph, his curve was devastating, and his K/9 was over 12 that year. When Strasburg arrived, it was like someone was here to finally make the team competitive. We could start dreaming about teams with records above .500.

When Bryce showed up, though, it was different. Once he arrived, this team had arrived. Strasburg’s debut in 2010 was in the dregs of a 90+ loss season, his outing brought them up a 28-31 record, tying them with the Marlins for 4th place in the division for a few days. Bryce’s 2012 debut was in late April, and while they didn’t win that game, the remained a game up on Atlanta for the division lead.

After month he was slugging .500, after 2 he had already hit 8 HR as a 19 year old rookie. By the time he started slumping, it didn’t matter much, because the Nats were up on the rest of the NL East by 3 or 4 games day in and day out. They had become really good a year earlier than many of us expected, and it seemed like Bryce was the reason, or at least that their success was inexorably linked with him.

Bryce has a personality, too, that brought some criticism, but he became our guy, perhaps because of that. We defended him because their were critics about the way he played, or carried himself, or didn’t play hard enough (or played too hard, if you remember), and we did so because he was OUR superstar. We got to debate whether he or Trout was the better player, and who would end up with the better career, back when that was a debate.  Because we got to lay claim to a guy who might be the best player in baseball!

His monster home runs in the 2014 playoffs are the only thing from that series against the Giants that I remember fondly. His 2015 season was one of the best in history. He will have hit over 180 HRs with Washington, all before turning 26. And, even though it didn’t “count”, his performance in the HR Derby was epic, and is a memory that will stick with most of us forever. And he was on our team the whole time!

There is some similarity with Alex Ovechkin in Washington – forgetting what happened this year – there was always criticism, and some of it was true. But it didn’t matter because even if he wasn’t the best player in the league, there were nights when he was, and he was always the opportunity for an entire season when he was.

But it has also always been a little different, Harper and Ovechkin, because Harper has had this shadow of free agency, and Scott Boras, hanging over him. Maybe that’s what it was like before Ovechkin signed his long term contract to stay in DC, but certainly with Bryce, in addition for pulling for our guys, we’ve spent the last few years assuming Bryce was maybe leaving. So we’ve been preparing a little bit to deal with the loss of our guy.

Who knows, maybe he’ll stay, and I think that could be great for the team, and we’ll love it because he’s our guy. Or, maybe he’ll go, and that could even be the best decision for the Nats. But if he doesn’t stay, well, this team was never really good before Bryce, we’ll have to see if they can be good after him.