Those Other Bullpen Guys 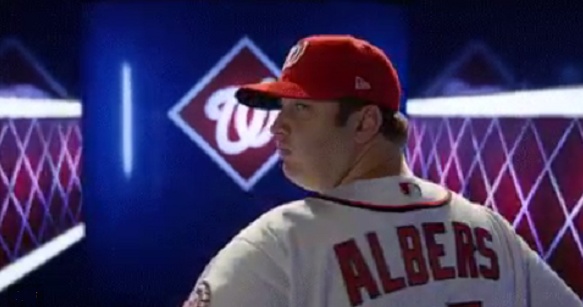 Winning after the 6th, and the game is practically over, right? That’s at least the thought with the new bullpen. Assuming Ryan Madson comes back healthy, and it looks like that’s happening soon, then the combo of him, Brandon Kintzler, and Sean Doolittle should be enough to do just that almost every time. For whatever demerits he deserves for having a bad bullpen to start the year (and much of that belongs with the ownership and bad damn luck), all credit to Mike Rizzo for getting this new bullpen together.

Last night, the two came in to save the game, and neither will get an official save. Edwin Jackson, who had pitched a very good game, entered the 7th inning with a little more than 90 pitches and a 5-2 lead. The two runs he gave up were on a Giancarlo Stanton HR (fine) and a Giancarlo sac fly. After giving up 2 singles and throwing a sac bunt away, an intentional walk loaded the bases with no outs.

Perez came in to do what he does best, get lefties out. He got Yelich on a weak grounder to third, and left the game, which is the right way to use him. Albers then came in, and was able to strike out Ozuna, who is a .310 hitter with 31 HRs right now, before inducing a grounder from Realmuto to end the inning. The Nats then scored 3 in the bottom of the inning, and the game was pretty much over. Kinztler pitched the 8th, Doolittle the 9th, but there was no save, which is just, because if the stat had real meaning, it would have gone to Perez and Albers.

Matt Albers has had his share of praise already this season. He had his first save ever, after being second on the list of most games finished without one. He got notoriety as he filled in at closer a couple of times for the Nats before their bullpen moves, although it was often couched as a “this is the best they can do?” kind of thing. Well, it was, and he wasn’t spectacular, but he didn’t wilt, either, something that set him apart from the rest of the bullpen.

Perez, on the other hand, isn’t really doing anything different. He’s doing the same thing he’s done every year since 2012 – he’s mowing down lefties. His ERA was high early in the year, it was still sitting just above 5.00 when June started. I saw people pointing at him as part of the collective woes of the bullpen, that he was another one who could be fired into the sun with the rest of the guys blowing every late inning league.

But Perez wasn’t doing all that poorly, he was just being used against righties, because the bullpen was in such bad shape. Against lefties, he continued to dominate. After last night, they are hitting a measly .193/.281/.333 against him. Not many hits, and not much power. If the Nats are going to go far in the playoffs, they’ll need someone who can get lefties out. Perez has been doing it all season.

The Nats have some new shiny toys in the bullpen, and thank goodness they do. Counting on Shawn Kelley or Joe Blanton at this point appears to be a lost cause. Same with Koda Glover, albeit for somewhat different reasons. Those were three perfectly reasonable late-inning choices in March, and they’ve all failed. But Albers and Perez have been anything but failures, and their continues success, usually in the background behind Kinztler-Madson-Doolittle, is a bit part of the team’s success.