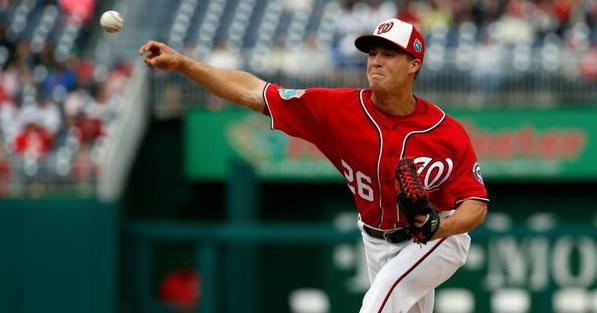 When the Nationals acquired Trevor Gott in exchange for Yunel Escobar in the winter of late 2015, it seemed clear that Gott would soon be in the Nats bullpen. After all, the rookie had spent most of 2015 in the Angels bullpen, finishing with a 3.02 ERA in 47 2/3 IP.With a fastball sitting up around 96, many expected him to be on the opening day roster in 2016, fighting for a late inning role.

Instead, it’s now May of 2017, and he he’s only been with his new big league club after September callups last year. Despite all of the issues with the Nats bullpen, they haven’t brought him up, and they probably had good reason for being wary. He had some worrying signs in 2015. His 96 mph fastball wasn’t striking guys out, only 27 Ks in 47 2/3 IP is really surprising and somewhat troubling.

He started out 2016 in AAA, and it didn’t exactly inspire any confidence. He threw 39 1/3 innings for Syracuse last year, and compiled a 4.58 ERA there. He finally did make it to the Nats in September, and looked good enough, but only threw 6 innings. He’d have to go back to Syracuse and prove himself.

Well, it seems like he’s done that. He’s now sporting a 2.95 ERA after almost two full months. He’s cut down on walks, and has improved his secondary pitches. And in the 6 weeks, he’s been nearly unhittable.

He has a track record in the majors already – while his peripherals didn’t scream closer, he did well for the Angels. He seems to have made the adjustments he needed to make in order to succeed at AAA. Now, at 24 years old, it’s time for him to come up to the Nats.

It won’t go as well as his last month and a half at Syracuse has gone. He still doesn’t strike enough guys out to convince anyone he’s a closer yet. He’ll probably walk a few more, and hitters make too much contact off his fastball considering it’s 95+. But, it’s a sinker, so if he gets it right, he can still be very effective. He’s done what he can in AAA, he should get his chance to help stabilize the Nats bullpen. Gott knows they could use the help.