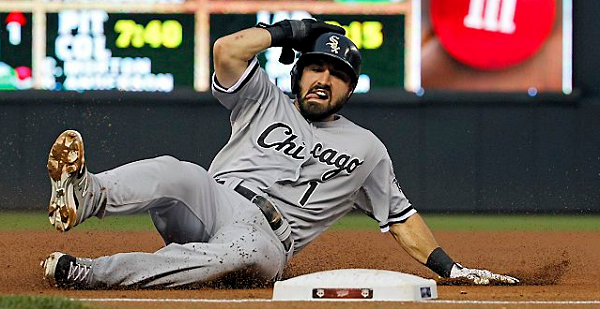 The Nats acquired Adam Eaton from the White Sox today, in a trade that sent over three pitchers, including their two best pitching prospects, Lucas Giolito and Reynaldo Lopez. The Nats certainly added a player that can help them. But they also traded away a couple of blue chip prospects.

Let’s take these things one at a time. First, what the Nats got – a really good outfielder. Someone who fits a need very well for this team, someone who will help them be a better team next season (and subsequent seasons).

The Nats have a player that is probably surprisingly valuable, in terms of WAR, to most fans who don’t watch him on a regular basis. Heck, it might be surprising to those fans who do.

Before I get into describing what he does, let’s talk about that WAR. Last year, Baseball reference had him at 6.2, ranking him 10th among AL position players. But he played RF and was so good there defensively that you can make the case his numbers were inflated.

Look, there are plenty of flaws with this ranking. Bryce Harper had a terrible season and should be better this year, and was better than everyone on the list in 2015. Murphy was a much better offensive player and gets knocked for defense – possibly too much. Turner would be on this list if he played all season. But the point remains, Adam Eaton is a really good player.

If you squint hard enough, he can sort of remind you of a Ben Zobrist-type player. He doesn’t have the power or the defensive versatility of Zobrist, but he is that sort of all-around solid player who just does most things well without being a stand out at any of them.

He hits the ball in the air more than most, but he doesn’t hit many infield popups. He is about league average for line drive percentage, but he hits the ball harder than the rest of the league. He doesn’t hit many home runs, although he has improved that over the last few seasons. His ability to hit the ball hard might be part of the reason that he also led the AL in triples two of the last three seasons.

As for his defense, he is probably considered about average overall. He was actually an elite defender this season, but it’s because he played right field. As a center fielder, his numbers are more mixed. He’s probably a good bet to be an average CF, with a very very strong arm. It might make the most sense for the Nats to put Bryce in center and let Eaton be an elite defender in RF again, but I’m not sure they’ll go that way.

All these pieces of his game combine to make a very good player. I have trouble calling him a “star”, although Jeff Sullivan of fangraphs did. Here’s is what he wrote:

over the past three years, 235 players have batted at least 1,000 times. If you go by WAR per 600, Adam Eaton ranks in 40th place. That puts him in the top 20% out of players who have already been getting at least semi-regular playing time. I don’t know where your star cutoff is, and the whole thing is subjective and arbitrary, but are there, say, 50 star position players? Eaton fits. Statistically, if not by perception, Eaton fits

I don’t know if my cutoff is 5% or 15% or whatever, but it’s probably not the top 20% of position players. What he is to me is just a really good, even great player. And his consistency suggests he will be very good for a while. Which brings up his incredibly team-friendly contract.

The contract that he has (5 more years, 2 of them option years, with an average annual value just under $8M) is extremely appealing. It is important because if they get the player he’s been, or even a slightly worse version, the contract is an incredible bargain for a long time. It gives the Nationals more flexibility to make other moves, especially as they lose Jayson Werth at the end of 2017 and Daniel Murphy at the end of 2018, freeing up a total of $38.5 M in final year salary for the two of them.

Viewed on it’s own, this is a really good pickup for the Nats, and it makes them better for the next few years. But at what cost? At what coooooooost? Well, three high end pitching prospects, of course. Lucas Giolito and Reynaldo Lopez are probably the best advanced pitching prospects the Nats have had since Strasburg, that’s a high price.

It was certainly expensive, and many are saying that Rizzo got fleeced in this deal. I do think he “overpaid” although he got a player with pretty similar WAR to Chris Sale over the last few seasons, and most fans would have been happy if they had made the Sale move. So I think some of the negative reaction is that Adam Eaton is undervalued.

Both Giolito and Lopez have potential to be legitimate front line starters, and the Nats may end up regretting the move some day. But they are also both flawed players, with real question marks.

Giolito still has a very high ceiling, but there are some red flags. Baseball Prospectus pointed out that he has regressed and “is a particularly confounding case because he was both better in the past, but that, even then, there were obvious developmental hurdles still to go.” This isn’t to say he doesn’t project as a good starter, but I’m not sure that “ace” is really what people would guess about him anymore. And if he does get there, that may be years away.

Lopez is a different story completely. He came out of nowhere, and seems to have gotten better each season. He has a blazing fastball, but as Nats fans saw this year, it is flat and can be very hittable. Is he a starter or a reliever? As a starter he might take a few years still to get enough feel for his two pitches to be consistent. As a reliever, he might well be a closer, and a good one at that, but again, the development timeline is slow unless Chicago decides to move him to the buillpen today.

This is not to disparage either of them, or excuse away an overpay (no, I’ll do that in a moment). Rather, it is to say, while these were the two best pitching prospects in the Nats org, and Giolito was once the best pitching prospect in the game, neither are sure things. And that’s not a “prospects aren’t in the majors yet” thing, it’s a “these guys each have some issues” thing.

So, the Nats saw an opportunity and went after it. Overpaying is all about perspective, and when the Nats missed out on Sale, and then Melancon, I saw plenty of complaints that the Nats just were not understanding the market, and that you have to “overpay” this offseason. Maybe… but, check this out

When I saw this it gave me a little different perspective on the trade. If you would have done the Sale trade, but think the Eaton trade was insane, think about this – instead of getting Sale, they got a guy who fills a need, and has WAR numbers similar to Sale, and they got to keep Robles.

Does any of this mean they didn’t overpay? No, I think getting Sale would have been an overpay, and I think this was an overpay. At least, in terms of what you got for what you gave. But maybe in a tough market this season, overpaying was the only way to get the team to improve. And they did improve the team.

The contract really does make a difference, making it much easier to swallow. So, yeah, they overpaid, and yeah, they got a really good player. Those two things don’t have to be mutually exclusive. Maybe it’s hard to love this trade, because of what they gave up, but I think plenty of people will love the player. In other words, don’t hate the player, hate the trade.