We don’t need to worry about Ryan Zimmerman, right? Those hits should start coming any minute. After all, despite his poor numbers since coming back, he’s top 10 in exit velocity in MLB, and bottom 10 in BABIP, so, it’s all just bad luck.

Unfortunately, it’s not that simple. Zimmerman is fourth in ground ball exit velocity, and top 25 for liners and fly balls. So he hits grounders hard, and it’s not like he’s not hitting other pitches softly. But he hits so many grounders that it almost doesn’t matter.

Among all 188 players with 400 PAs, his ground ball percentage is 38th highest. This is about 20% down the list, so it’s not exactly the worst in the league, but it’s really high.

Despite this, he should probably be doing better on these, so there is some bad luck to blame. I looked to see if the launch angle data suggested he was basically hitting it straight down. This could nullify the effect of the hard hit balls, but it isn’t really the case. He hits a bunch of grounders, but he doesn’t have some crazy amount of contact with a launch angle below 0 degrees.

There is some other data here that is worrisome. Of the top 100 players on that list (most GB%), only three have lower line drive percentages – Matt Holliday, Max Kepler and Carlos Santana.

They all have higher home run rates than Zimmerman, though. Even with that, while Santana is having a good season, Holliday is not doing very well, and Kepler, the one with the closest home run rate to Zimmerman, is only hitting .238/.312/.432 (although at only 23 years old).  Zim isn’t hitting many line drives, and his fly balls are hit hard but not hard enough to carry out of the park.

There is some hope, because he went through something similar last season, and ended up working his way out of it. He returned from a DL stint on July 28, and from that point until Sept 7, when he shut it down for the season, he hit .311/.372/.652.

Unfortunately, he also is striking out much more than he has in the past – right now he’s at a 22.2% rate, his career rate is 18.0%, he was at 20.3% last year. This year, trying to generalize a bit, he has swung at more pitches inside that weren’t strikes, as well as more outside pitches that weren’t strikes, than he did last season. He is also expanding the zone low, although he is chasing fewer high pitches. 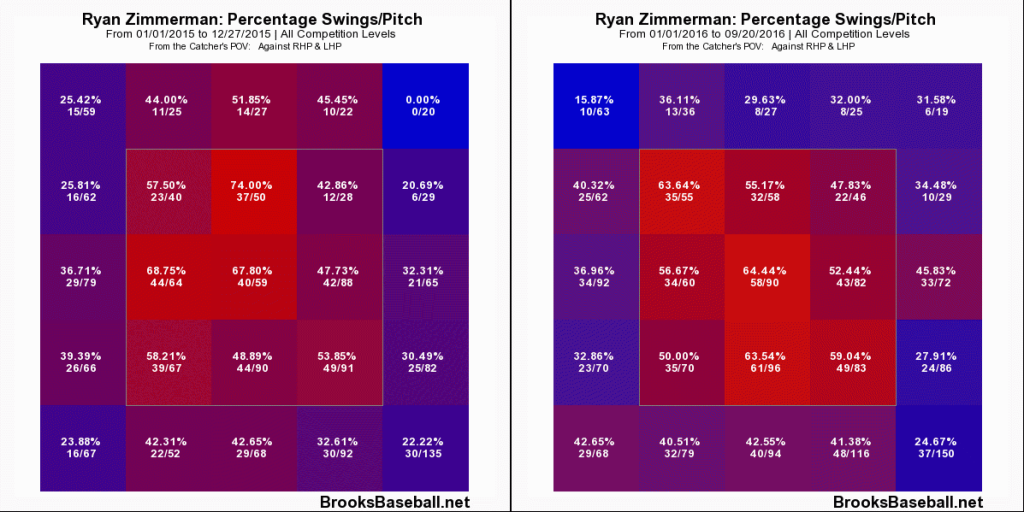 Perhaps more troubling, he is missing pitches in the zone more than he did last season. In other words, even if it’s a strike and he should be hitting it, he’s not.  It’s worse with fastballs, so maybe he is having trouble catching up with them. Or, I don’t know, maybe the first thing is more troubling. They’re both not good, I know that much.

Luck has not been on Zimmerman’s side, and I’m not just talking about injury here. Certainly more of his hard hit grounders should have made it through the infield. And a smaller number of line drives probably deserve that same perspective.

The problem is, he also has quite a few issues that just can’t be pinned on luck. His inability to hit line drives, to drive fly balls over the fence, as well as his expansion of the strike zone and his difficulty catching up to fastball strikes, all point at much more than just bad luck. Unless Zimmerman can fix these issues, a reversal of luck won’t help his numbers enough to make him an effective hitter.