Without a Race in September, Questions Can Be Answered 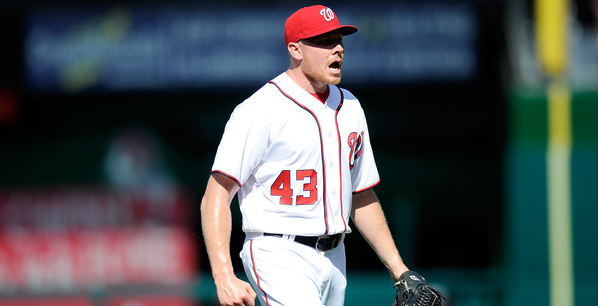 As September arrives, the NL East race is looking more like a stroll. The Nats still want to win enough games to keep home field advantage in the NLDS. But they are afforded the ability to rest some players, keeping them fresh for October. And that gives them ample opportunity to try and address some roster questions before the postseason begins – so here are a few.

What is the bridge to the closer?

Getting to Mark Melancon hasn’t been challenging, but, like most teams, it hasn’t always been smooth. Shawn Kelley has essentially been the Setup Man for most of the season. Are they going to stick with him? While his overall numbers have been very good, especially that strikeout rate, he has given up a worrying number of home runs.

Like Max Scherzer, because Kelley hasn’t let many men on base, his HR propensity hasn’t hurt him much. But it would be of concern in a playoff game. The alternatives have their own issues – Blake Treinen has walked too many, Koda Glover just hasn’t been consistently dominant. The Nats also might want to play matchups in the 8th inning.

Which lefties will be left?

For those aforementioned matchups, while they did acquire Marc Rzepczynski to get lefties out, he may not be enough. If they face the Dodgers in the first round, they’ll see a very lefty-heavy lineup with Adrian Gonzalez, Corey Seager, Chase Utley, Josh Reddick, and Joc Pederson all hitting from that side. Similarly, the Giants have Brandons Belt and Crawford, Joe Panik and our old pal Denard Span. Having more than one lefty-killer could be crucial.

The Nats need to determine if Oliver Perez can give them quality appearances even as just a LOOGY, or if Sammy Solis can recover in time to be effective. If those two guys can’t perform, they could also Matt Grace, who has destroyed lefties in Triple-A. Sean Burnett and Bryan Harper could be options as well, but would have to be on the 40-man roster before the end of today to be eligible (edit: or not, it’s a bit confusing).

What about the rotation?

They also will have to think about what they want to do with the third spot in their starting rotation. Tanner Roark has had an incredible season, but Gio Gonzalez is better against lefties than he is. That being said, Roark actually has reverse splits against them, as does Stephen Strasburg. Scherzer is the only one of those who is worse against lefties.

Because of this, putting Gonzalez in over Roark might not be incredibly helpful, even in a lefty-heavy lineup. On the other hand, if Joe Ross comes back healthy, Gonzalez would most likely be a better option against those teams. Which leads us to the point that, against teams without many lefties, Gonzalez may struggle, so seeing if Ross can come back and be used as the number four starter in that situation will also be important this month.

What about first base?

The Nats need to see if Ryan Zimmerman can hit this September. 2016 has been bad for him, worse since his return from the DL. But it was only one year ago that he returned from the DL and was great – to the tune of a 1.024 OPS in his final 156 plate appearances in 2015. He deserve a shot this month.

Even if he doesn’t recover, it’s probably unrealistic to think that a healthy Zim would be left off the playoff roster. They doesn’t mean, though, that they won’t shuffle the lineup around the currently-struggling first baseman. Whether it’s reserving a bench role for him, or substituting him out late as part of other defensive changes, they probably will want to move some guys around in September to keep them comfortable in different positions – specifically I’m thinking about Trea Turner at second base and Daniel Murphy at first.

They’ll also want to see if they can get Stephen Drew up and running again before the playoffs begin. They have gone the last few days, since Wilmer Difo was optioned, with Turner as their backup middle infielder. This may be enough for them in the playoffs, but they’ll probably want to get Drew and Difo into the lineup in September as contingencies.

The Nats are in great position, entering September more than a week’s worth of games up on the division. They’re a balanced team, with many strengths, but a few questions do remain. Hopefully, they’ll use September to answer some of them.