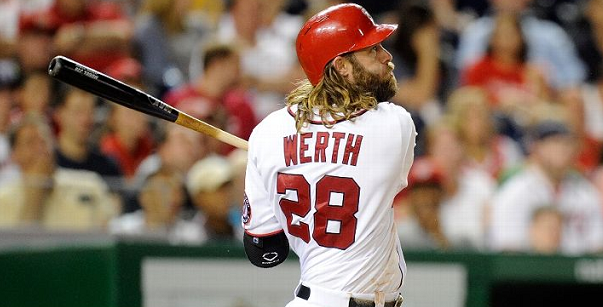 At the beginning of this season, there were doubts that Jayson Werth could be an effective hitter anymore. He looked lost for much of the previous year, he was entering his age 37 season, and a repeat of his 685 OPS from their starting left fielder could easily sink the Nationals playoff chances.

As this season began, he seemed to fulfill those expectations. He appeared pretty lost at the plate in April and May – he hit a few home runs, but he wasn’t getting on base much at all. He only managed to hit .225/.280/.410, which isn’t really enough of anything. Even moving to the number 2 spot in the order in mid-May didn’t seem to help much at first. Other than a three walk game against the Mets, who issued 11 that night, he added a few more hits, but didn’t seem to improve much.

But, as they say, talk of his demise was premature. Beginning with a pinch hit grand slam on May 28th, he started a run where  he had at least one hit in 11 of 12 games. During that streak, he started walking again.

June turned out to be a great month for him, and while his production tailed off somewhat in July, his on base percentage remained still high at .353. Over the last two months, since the beginning of June, he’s hit .282/.398/.446. This is the kind of OBP we had come to expect from Werth over the years – his total OBP from 2012 to 2014 was actually .394 (good for 7th in MLB over those three years).

Combining the poor first two months, and his apparent recovery over the last two, he is hitting .254/.343/.429. It’s not a great average, and not a ton of power, at least compared to what you’d hope for from a left fielder. But, neither are bad at all, even with his awful first two months weighing him down.

More importantly, his .343 OBP is 19th among the 51 NL outfielders with 200 or more PAs, about a third of the way down the list. Incidentally, #47 and 48 on the list are Michael Taylor and Ben Revere, respectively.

He also leads the NL in pitches per plate appearance, which is important because it helps extend pitchers and innings, and it gives his teammates a few extra looks. It’s also a key part of why he’s been able to get on base so much, as evidenced by his current 35 game on base streak. Say what you will about the luck aspect of such streaks, it’s the third longest in Nats history. It’s also really hard to do unless you are hitting well, and Werth is hitting well.

What’s changed? Well, since June 1, he has been swinging at fewer pitches. With fastballs, when he does swing, he is missing them less. This is good to see, as it’s maybe some evidence that he isn’t just cheating on fastballs. He is more patient across the board, but that’s the only sign that he is back to form.

Perhaps most tellingly is that he is swinging at fewer pitches outside of the zone. He has been pitched low and away all year, but early in the season he was swinging at that stuff.

This could simply be about his approach – that he is picking a zone to hit, and low and away is not that area. But I’m not so sure about this – he is still swinging at pitches that are low and away but are in the strike zone, he’s just laying off the ones that are out of the strike zone. Instead, one might say he is “seeing the ball well.”

This is something Werth has done for most of his career, and once again he takes a million pitches, has a good eye, and walks a ton. This is valuable, making his offense average or better among MLB starting left fielders, and making him a solid, positive part of the lineup. In other words, Werth looks like an older, but still very useful, version of his old self.