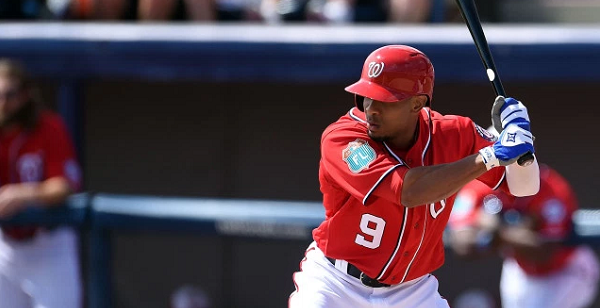 Ben Revere had a really good day on Monday, going 4 for 5. Maybe it’s a sign that he’s returning to form. Then again, he didn’t get a hit last night. But even if he is getting back to his old self, he still can be a divisive player. That’s because he’s the kind of hitter that is ideal for a sabermetric vs. traditionalist head-butting.

As a speedster who (usually) hits for a high batting average, he is an old school dream at leadoff. On the other hand, he  has an unimpressive OBP, and sees fewer pitches per plate appearances than almost anyone in the league (but, interestingly enough, not Daniel Murphy or Wilson Ramos). He’s the kind of player that fans of advanced metrics would prefer to bat lower in the lineup, so that he doesn’t get more plate appearances than his teammates.

There are merits to both options, but old school Dusty Baker has Revere hitting first. And when he gets on and the middle of the lineup follows, you see why. Putting him in front of the pitcher would seem like a waste.

Maybe, though, the best place for him isn’t the 7th or 8th spot, but actually hitting 9th. This can satisfy the sabermetric crowd, and, in more than 75% of his PAs, the old school crowd as well.

Batting order is sometimes (ok usually) overanalyzed – even if you put a guy like Bryce Harper in, let’s say the 6th spot, it probably won’t affect most individual games all that much. However, what is important is that hitting him 6th would limit his total number of PAs over the course of the season.

Why would you want Harper to get 600 PAs when he could get 650? The latter is most certainly better for your team, over the long run, even if it’s hard to see it evidence itself over the course of 9 innings.

Even though it might not make a huge difference, it’s clearly not irrelevant, so of course the Nats should think about this. Russell Carleton of Baseball Prospectus examined hitting pitchers 8th, and found that it does give a very slight advantage offensively to hit the pitcher 8th. The problem is, it may not be enough to do more than break even after considering the negative effects like having to pull your starter for a PH a few of extra times a year.

The difference between 1 lineup spot – 8th and 9th – is only about 20 PAs per year, so putting the pitcher 8th doesn’t hurt you by getting so many more pitchers to the plate. And usually any pinch hitter will be better or at least as good as bottom of the lineup guys.

But, if it’s all even in the end of a simulation, maybe it’s not necessarily even when you have the right personnel. There’s a reason why the traditionalists want Revere leading off. Despite the greatness of a guy like Harper, without hitters getting on base ahead of him, it’s hard for him to knock anyone but himself in. Guys in scoring position are even better. Revere is a good hitter, and a good base stealer, and that’s helpful.

The sabermetricians, acknowledge all of that, but note that putting a guy with a .325 career OBP and no power at the top of the lineup would give him over 100 PAs more than if he batted 9th. That’s a ton of extra plate appearances for your… 6th best hitter? 7th?

Ideally, you’d like to limit Revere’s PAs compared to his teammates, but still get his skill with a bat, his speed and his ability to annoy pitchers and draw their focus once he’s on base in front of those better hitters. Hitting him 9th does just this.

Batting Revere 9th allows the Nats to take advantage of his abilities as a traditional leadoff hitter every time through the lineup except the first. It limits his time on offense compared to his teammates, while allowing him to contribute where he can help the most, right in front of them.