A Little Praise for Tanner Roark 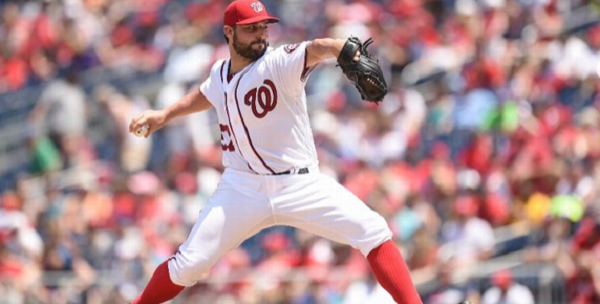 The season is nearly 45% complete, and the Nationals are leading their division by 4 ½ games. Sure, the season is far from over, but they’ve got the fourth best record in the league, and they look strong.

Individual players that usually come to mind as the reasons for this are probably Bryce Harper, Daniel Murphy, Wilson Ramos, Stephen Strasburg and Max Scherzer. And those guys are a huge part of it. But there’s one player who doesn’t get enough credit for what he’s done for this team, and that’s Tanner Roark.

Last night’s performance probably helps underrate him. He threw seven innings of dominant, 4-hit, shutout ball. If he had been hit for in the top of the seventh, the Nats may well have won. But with the recent bullpen struggles, and the fact that he had a shutout with only 81 pitches, it made sense to let him return. A walk, a liner off a glove, and a home run later – he gets tagged with a loss.

But whether you blame it on him, on run support, or on the manager, he was still spectacular for seven innings. Yesterday’s game improved on his season numbers for the most part, although his ERA did go up 0.04 points. He’s top 20 in the NL in fWAR among starters, 18th in strikeouts, and 22nd in ERA.

But while his numbers are really good, they reinforce a better story. Roark doesn’t look exactly the same as he did in 2014 (I’ll ignore his 2015 numbers since they often were compiled as a reliever). He’s throwing the ball 2-3 mph faster on all pitches, including breaking stuff. And he’s throwing the ball up in the zone a bit more, maybe because of that extra velocity.

He’s also striking more guys out. Even if you take out his 15 K start in April, he’s got a higher K/9, although the increase goes down by half. He’s walking a few more guys, so his K/BB ratio has dropped.

But he looks as dominant as he did back then, if not more, and it’s something of a surprise. Sure, after his great debut at the end of 2013, coming back and having a great season in 2014 was a pleasant surprise.

But to do it again this year, after what happened in 2015, is more than a surprise, it’s a great story.

Then, the Nats went out and got Max Scherzer. They didn’t trade anyone away, so someone had to sit, and Roark got the short straw. Relegated to the bullpen, and without a really well-defined role, he struggled. He was a part-time long man, late inning guy, and starter, and was never totally reliable.

If he had succeeded in his 12 starts, and struggled as a reliever, that would’ve been alright. Instead, though he wasn’t great as a reliever, he was much worse as a starter, with an ERA over a run higher than when he came out of the bullpen. He was in the rotation the last month of the season and it did not build up confidence that he’d succeed or even definitely be named a starter in 2016.

More than a few predicted that Roark would be the weak link in the Nationals’ pitching staff. Many wondered if, after a great 2014, the Nats broke Roark by moving him to the pen. Last year he just wasn’t the Roark of 2013-2014, but maybe that was a stretch to think he was that good anyway.

The Nats are leading their division because of their great pitching staff, among other things. But the Nats pitching staff isn’t just because of the pocket Aces they hold. It’s also great because they have Tanner Roark there to do more than just go out and pitch every 5th day. Instead, he goes out and pitches like a top 20 starter every 5th day, and people aren’t noticing it enough.