The Nationals Take the Royal Road 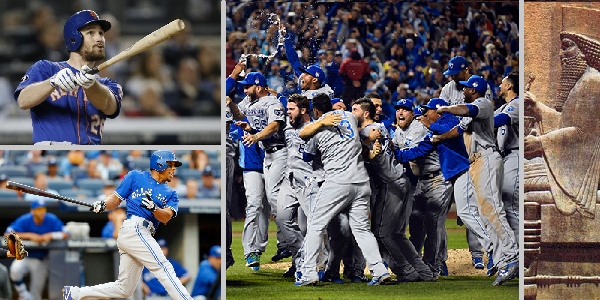 The Nats have made two offseason acquisitions that will have impact on their daily lineup – the signing of Daniel Murphy and the trade to get Ben Revere.

Murphy will certainly be an addition to the offense. His defense leaves something to be desired but, as I already detailed, he could be used all over the field to mitigate that and hopefully keep everyone healthy.

As for Revere, he is an imperfect player, for sure. He doesn’t walk enough and he had no power. His defense is nothing special. But he fills several needs this team has – as a lefty, a speedy player, and an outfielder.

He is, in many ways, the opposite of the strikeout-prone, 60 power/70 defense Michael Taylor, which means they could really complement each other in a platoon. And I’m surprised the Nats were able to get a player who has shown to be around a 2.5 WAR player over a full season of PAs in exchange for Storen, a who had struggled so much in the playoffs and the last few months, and who they were clearly trying to move.

I think both Murphy and Revere are good additions to the team, despite some more desirable alternatives. And although I’m not convinced either player belongs at the top of the lineup, there’s a decent enough chance that Dusty will bat them 1-2 most days.

Rizzo knows that Dusty is going to see those two – a speedy guy with a high average, and a no strikeout contact guy – and see the most stereotypical #1 and #2 hitters the team has.

From Susa to Sardis

The Kansas City Royals, AL pennant winners the last two seasons and current MLB champion, have certainly been an interesting story. To those who say what they have done flies in the face of sabermetrics, that’s just not true. “Sabermetrics = OBP” is an easy way of describing the analytics, but it’s oversimplification to the point of inaccuracy. The Royals also do significant amounts of analysis, which means more than sorting the league by OBP and making your list of potential targets from there.

Kansas City succeeded by building up a team that was high on contact, and low on strikeouts and power. (The ridiculous bullpen is another story). The Royals finished last in the league in strikeouts in 2015  – at 973 Ks they were over 100 strikeouts lower then the next lowest team. They were also second-to-last in walks, and had the highest contact rate as a team, at 81.9%. In other words, they swung but they didn’t strike out. That’s exactly what Revere and Murphy do.

The story was pretty much the same in 2014 as it was in 2015. And as a result, they finished both seasons towards the very top of the batting average rankings, but in the middle of the OBP. With this in mind, let’s see what the Nats just got.

Among qualified players, Daniel Murphy had the single lowest in strikeout percentage at 7.1%. Revere finished 7th from the lowest, at 10.1%.

Neither were quite as bad at walking, but they still finished towards the bottom of the list. Revere’s BB rate was 5.0%, 28th from the bottom but pretty easily lumped in with a cohort of guys who range down to 4.5%, 12th-worse in the league. His career rate is 4.4%

In terms of contact rate, these guys are the very best in the league. Murphy was 92%, yo, good enough for 2nd best in all of baseball. Revere was just behind him, ranking 4th, at 90.1%.

And as a result, these guys, just like the Royals, had high batting averages with middle of the road OBPs. Neither are superstars, so neither topped the AVG list. But among qualified 2Bs, Murphy finished 9th, not spectacular but pretty good, in part because of a low BABIP. In 2014, when in BABIP was high, he finished 5th. Ben Revere finished 3rd in batting average among the 23 qualified CFs.

Neither Rain nor Snow nor Injuries to Power Hitters…

Does this mean the Nats have eschewed on base percentage in favor of batting average? No, of course not. But it is certainly noteworthy that the two biggest position player acquisitions have been guys who make a ton of contact, never walk, and never strike out.

This team has struggled with RISP over the last few seasons, and it is something that I have said time again is mostly luck-based. But it’s MOSTLY luck-based: players that are prone to strikeouts are going to strike out more in late/close situations because of the relievers they are facing. So while yes, the poor performance with RISP will balance out in some ways based on luck, there is something to be said for getting some guys who will put it in play.

It will be interesting if these two acquisitions, put together, start changing the Nats from a patient team taking it’s bases and waiting for the big guys to drive them in, to one that manufactures more. If health were guaranteed, the big guys can just do their jobs. But with the injuries they’ve had, as only one or two guys have been around who could hit those three run home runs, maybe Mike Rizzo sees a need to act a little more like the Royals.