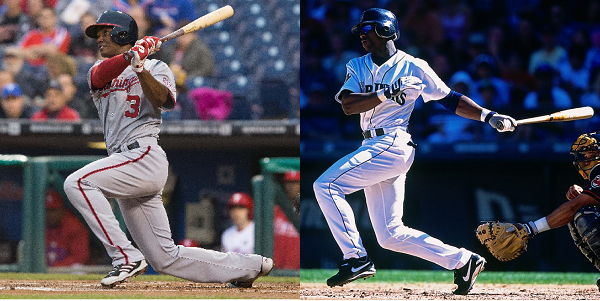 Sometimes a simple tweet can spark some deep-seated need for me to do some research. This is one of them:

Here’s a close up of the picture:

I’ll spare you the guessing and get to the point. Player A is Mike Cameron, Player B is a National who has often been compared to Cameron, Michael Taylor. McNally’s point, I assume, is that despite league-wide offensive differences, for a guy who is supposed to end up like Mike Cameron, Taylor isn’t starting off very much like Mike Cameron.

And he’s right. If we are looking at Taylor as a future Cameron, it looks like that may be a bit of a reach. Cameron, by the way, was a very good defender, but not as good as Taylor with the glove. In terms of other similarities though, the power potential and high strikeouts certainly make the comparison apt. So is the gold glove CF who managed a 110 OPS+ from his age 26 through his age 33 season Taylor’s ceiling?

My first thought was that Taylor could just be experiencing that slump that we always hear about. Good hitters come up, they can hit. Then pitchers figure them out, and they slow down. It’s the guys who adjust to that who get to stay in the Majors. And to be fair, he’s having a terrible July, giving him the worst OPS of his year right now.

Instead of comparing them with a 200 PA difference at what could essentially be the most formative time in the MLB careers, let’s do it with the same number of plate appearances. It makes sense in alot of ways, Cameron hit 318 PAs (where Taylor is now) on August 15, so only a month further into his age 25 season than Taylor is currently. And while he didn’t hit with much power after Aug 15 that season, Cameron did have a .370 OBP from that point on, so at least we could pretend we have that to look forward to with Taylor. Here’s what we get

Not pretty. Ok, it’s not as bad as the initial tweet suggested, and in the power-heavy era that Cameron came up in, the slugging difference may not be as big of a deal. But 40 points of OBP and 100 OPS difference is quite a bit, so Taylor is still pretty far behind.

The main difference, other than a few HRs, are the BBs and the Ks. Give Taylor 10 more walks and 10 fewer Ks, he’s batting .239/.311/.365 – still worse than Cameron but maybe really close, adjusted for the era. It’s a little lower than the OPS he had to start the month. Of course, we can’t do that, but it shows that there’s hope if you think Taylor’s really just having a bad month.

Now, Cameron had a few things going for him, or maybe, Taylor has some excuses. Cameron actually had an extra season in this timeframe, so he had more experience dealing with the majors, which may or may not make a difference. Also, Cameron had an extra year in the pros – playing rookie ball when he was 18 (Taylor didn’t start til he was 19).

But, since I am the eternal optimist, I thought I’d see if there were any other similar players to Taylor (fast guys with HR power and high number of strikeouts), who had 318 PAs around the same age, that didn’t start out great and still ended up being pretty good.

What we have here is a bunch of fast guys with power who struck out quite a bit. Sure, Cameron is much better than Taylor at the same spot in their careers, but he’s pretty similar to Hunter and Soriano, although the strikeouts are certainly concerning.

And snicker all you want at Nate McLouth, if they could get age 25-27 seasons out of Taylor that McLouth had, they’d be thrilled. Interestingly, AFTER his 318th career PA, Bo struggled mightily, hitting .205/.261/.379 for the rest of the season.

If Taylor can cut down on his strikeouts, there are certainly some great players that started out similarly and ended up being quite good. If he can’t, he might never be the kind of player we had hoped. The glove, and his ability to run into some home runs, though, will give him plenty of opportunities. So let’s hope he can cut down on the strikeouts.